Hello, fight fans, and welcome to this week’s edition of the Monday MMA Round-Up, looking back at the week that was in the world of mixed martial arts. There were quite a handful of events this past week, but outside of the cage, it was a rather quiet week compared to recently. Let’s dive right into thoughts on everything that happened.

Looking Back At UFC On ESPN 16

Here are the fights I would make for some of the fighters following UFC On ESPN 16:

The UFC continues on Fight Island on Saturday with UFC On ESPN+ 37. It will be headlined by a bantamweight bout between Marlon Moraes and Cory Sandhagen. Also among the main card fights is Edson Barboza vs. Makwan Amirkhani and Ben Rothwell vs. Marcin Tybura. The entire show will be airing on ESPN+, with the main card at 8 PM eastern time, and the prelims at 5 PM eastern time.

Also this week will be Bellator 248, which is a split show, and has a pair of main events with Michael Page vs. Ross Houston and Cheick Kongo vs. Timothy Johnson. It is the first major MMA event to be held in France, as it emanates from Paris. The show airs on CBS Sports Network at 11:30 AM eastern time on Thursday.

Also this week will be KSW 55 on Saturday at 12 PM eastern time. 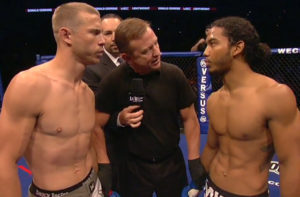 On October 10, 2009, one of the best fights in WEC history took place when the promotion made their lone appearance in the state of Texas for WEC 43 in San Antonio.

In the main event, Benson Henderson scored an unanimous decision win over Donald Cerrone in an incredible fight to win the Interim WEC Lightweight Championship. It was a close, back-and-forth fight that saw Cerrone go for lots of submissions, but Henderson fought his way out of them and did enough to take home the decision and interim title. The fight finished second in the Wrestling Observer Newsletter awards for 2009 Fight Of The Year.