Hello, fight fans, and welcome to this week’s edition of the Monday MMA Round-Up. It sure was a violent weekend in the world of mixed martial arts, with a lot of craziness happening inside the cages around the world. Did we see the greatest knockout in UFC history?

Let’s get into thoughts on the week that was:

Looking Back At A Crazy Weekend

Buckley’s KO is the fourth knockout in UFC history stemming from a spinning back kick to the head, per @ESPNStatsInfo. He joins Renan Barao, Uriah Hall, and Magomed Mustafaev. pic.twitter.com/8nzxfCMLEm

Here are some fights I would book for the winners and losers of this past weekend’s UFC On ESPN+ 37 event:

The UFC is back for the fourth straight week on Fight Island in Abu Dhabi with UFC On ESPN+ 38. You may have heard that the main event sees Brian Ortega taking on “The Korean Zombie” Chan Sung Jung. That has the potential to be the Fight Of The Year and has been over a year in the making. Also on the main card is Ciryl Gane vs. Ante Delija, Katlyn Chookagian vs. Jessica Andrade, Jimmy Crute vs. Modestas Bukauskas and Thomas Almeida vs. Jonathan Martinez. The entire show streams on ESPN+, with the main card at 7 PM eastern time and the prelims at 4 PM eastern time.

Bellator is back on Thursday with Bellator 249, their biggest show since moving to the CBS Sports Network. It is headlined by Bellator Women’s Featherweight Champion Cris Cyborg defending against Arlene Blencowe. Also on the main card is Patricky Freire vs. Jaleel Willis and Ricky Bandejas vs. Leandro Higo. It airs at 10 PM eastern time on the CBS Sports Network.

Also streaming this week on UFC Fight Pass will be a pair of regional promotions, as CES 61 airs on Wednesday at 8 PM eastern time, and LFA 93 airs on Friday at 9 PM eastern time. 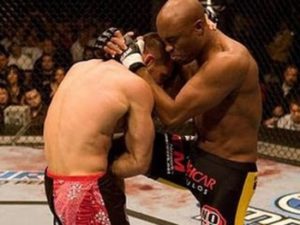 On October 14, 2006, one of the biggest moments in UFC history took place with the crowning of one of the greatest champions in the promotion’s history. At UFC 64, Anderson Silva scored a first-round TKO win over Rich Franklin to become the new UFC Middleweight Champion, a title he would hold until UFC 162 in July 2013. It was just Silva’s second fight inside the Octagon, but he proved to be a worthy foe for the long-time champion Franklin, and Silva would go on to score wins in his first 16 UFC fights.

That was the second of two title fights on the show, as the co-main event saw Sean Sherk score an unanimous decision win over Kenny Florian to become the new UFC Lightweight Champion in what was the first lightweight championship bout since UFC 41 in 2003. The show was also notable for the UFC debut of long-time popular veteran Clay Guida, and also featured future UFC title challengers Jon Fitch and Yushin Okami.