WWE’s black-and-gold brand is reviving a name once synonymous with World Championship Wrestling. The October tradition of Halloween Havoc returns this Wednesday after a 20-year hiatus for a special episode of NXT.

NXT is not only bringing back the name, but also returning is a stipulation match most associated with Halloween Havoc. Wrestlers will “Spin the Wheel, Make the Deal” for the first time on a WWE-produced television show. 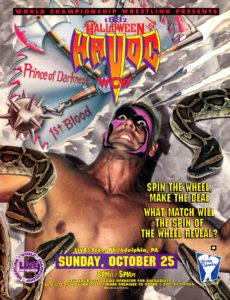 From 1989 through 2000, WCW produced 12 shows under the Halloween Havoc banner. Some of the shows from the early 1990s are remembered by fans for the stipulation match that combined the Wheel of Fortune concept with wacky gimmick matches.

The October tradition of Halloween Havoc began in 1989 with the inaugural event. The show was broadcast live on pay-per-view from Philadelphia. Long before WWE used the “ThunderDome” moniker, a cage match headlining the first Halloween Havoc was dubbed the Thunderdome.

Sting teamed with Ric Flair in the main event to defeat The Great Muta and Terry Funk inside the Thunderdome cage. Sting would also go on to headline the next Halloween Havoc in 1990. He would defeat Flair that summer to win the NWA World Heavyweight title, and Sting’s first title defense on pay-per-view would be at Halloween Havoc against Sid Vicious.

A year later in 1991, Sting took part in the now infamous Chamber of Horrors match. That bout has been panned by critics for being so ridiculously bad.

Sting was once again a featured performer in 1992, and he was involved in the first match billed as Spin the Wheel, Make the Deal. He defeated Jake Roberts in a coal miner’s glove match, which was the gimmick match chosen by spinning the wheel.

Spin the Wheel, Make the Deal would be dropped in the subsequent years after 1993. WWE brings the stipulation match back for two matches on its NXT brand. 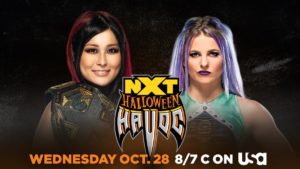 The NXT revival of Halloween Havoc includes two matches with Spin the Wheel, Make the Deal stipulations. Both of those bouts are also title matches.

Io Shirai defends her NXT Women’s Championship against challenger Candice LeRae. A normal singles match between the two would likely be good without a gimmick stipulation, but the Spin the Wheel, Make the Deal aspect adds another layer to their story.

LeRae was unsuccessful in challenging for the title at the last TakeOver card. Her husband, Johnny Gargano, tried to interfere after a referee bump. Nonetheless, Shirai was still able to retain.

LeRae and Gargano are on a quest to become the first husband and wife duo to both hold singles championships in NXT. With so much time invested in the storyline, either winning a title is quite possible.

Shirai won the championship earlier this summer, and eventually storylines shifted to a program with LeRae. Their rivalry is not new, as they feuded last summer after Shirai turned heel on LeRae. The roles reversed this year with LeRae as the heel.

Last October they wrestled each other in a few matches, and Shirai defeated LeRae via submission at TakeOver: Toronto. Shirai won most of the singles matches between the two in NXT, so it might be LeRae’s turn to win in their Halloween Havoc match. 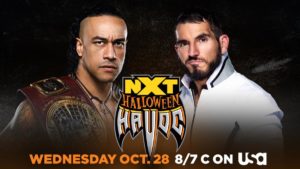 Johnny Gargano challenges NXT North American Champion Damian Priest. Their bout is another match on the card with a Spin the Wheel, Make the Deal stipulation. Priest previously retained his title after defeating Gargano at the last TakeOver.

Gargano, in storyline, is more rattled by the wheel of stipulations than his wife. The heel personas of the married couple have provided for some great skits on television.

Priest himself has also been very entertaining since he captured the North American Championship. His personality has really bloomed as he established himself as a singles champion.

The title reign of Priest seems too new to end, but Gargano can still win the title to fulfill his and his wife’s goal of being dual champions. That makes for an interesting dynamic in both title matches with the current champions in the midst of good runs.

The big question surrounds what stipulation they will wrestle under. The wheel provides endless possibilities depending on how many matches are on the wheel. Where the wheel stops, nobody knows. Except hopefully the creative team.

Barring any gimmick matches that could dampen their bout, Gargano and Priest had a terrific match at the last TakeOver. They can surely deliver with another good match in this return bout. 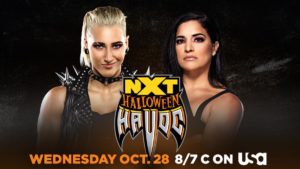 A second women’s match on the card features Rhea Ripley facing Raquel Gonzalez. This singles bout is weeks in the making in the battle of dominate forces in NXT.

The bout is likely the biggest match in Gonzalez’s career. For weeks, she and Ripley have tangled in brawls and segments ahead of Halloween Havoc. That set up the grudge match this Wednesday.

Ripley is coming off a somewhat lackluster feud with the Robert Stone Brand. She has been kind of in flux since dropping the NXT Women’s Championship earlier this year.

Dakota Kai could likely become involved in the match, as Kai is linked with Gonzalez.

The outcome of this bout is maybe the most intriguing on the card. Ripley has gotten a strong push, but so has Gonzalez in the lead-up to this match. A win by Gonzalez can help establish her character. Likewise, in pro wrestling, a lot of times the heel wins the first encounter to set up a return match. 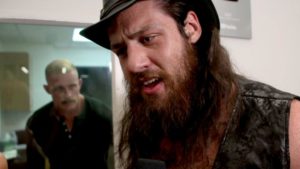 A match with Cameron Grimes against Dexter Lumis is being billed as a Haunted House of Terror. Whatever that means. It could likely include stalking by Lumis.

Lumis is a polarizing character in the NXT brand. Nonetheless, Lumis continues to get a push. On the other hand, Grimes has become a very entertaining performer.

The two combatants are known, but what is unknown are the details of the match. The name implies there is a haunted house. Will this be a cinematic match?

Questions abound about who wins the four matches announced for Halloween Havoc. We will just have to tune in on Wednesday to find out. Maybe we get tricks and treats.