Kota Ibushi won the G1 Climax tournament for a second consecutive year. Ibushi defeated SANADA in the tournament final this past Sunday on the 19th night of G1 Climax 30. The culmination of the round robin tournament headlined three nights at Ryogoku Sumo Hall in Tokyo.

Ibushi appeared in his third consecutive G1 final, and went on to win his second straight. Presumably that means Ibushi goes on to challenge for the IWGP double championship at Wrestle Kingdom next January. However, Ibushi first has an obstacle in his way at Power Struggle coming up this November.

Jay White is eyeing the briefcase that represents Ibushi’s title shot. He is set to wrestle Ibushi at Power Struggle with the title shot on the line. Other matches from the undercard on Sunday set up more bouts for Power Struggle, including the main event of the upcoming show.

Headlining Power Struggle on November 7th is Tetsuya Naito defending the IWGP Heavyweight and IWGP Intercontinental Championships against EVIL. Not only did EVIL pin Naito during the G1 tournament, but he also attacked Naito for a post-match beatdown on the show from Sunday at Sumo Hall.

The card at Sumo Hall was in some ways proverbially a one-match show, which was the bout to determine the tournament winner. The match went just long enoug 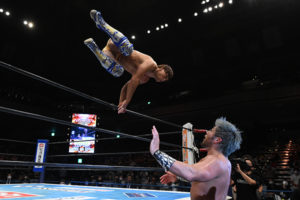 The taped up leg of Ibushi played a role in the match. They started slow, and set the stage for what was to come. After they traded chops and strikes, Ibushi was reeling when SANADA attacked the injured leg. They botched a dropkick spot, and that upended the pacing in the match for a short time.

SANADA went back to targeting a leg, but Ibushi soon fought back. Ibushi then applied a STF submission hold. SANADA answered back with a different hold, and he locked in the figure four. Ibushi escaped to rally, and he used a standing moonsault for a two count.

Ibushi caught SANADA with a Frankensteiner, and Ibushi followed with a plancha to the outside. Moments later, SANADA came back with his own version of a plancha, after doing his signature leapfrog/dropkick combination.

Ibushi twice avoided a moonsault, but Ibushi himself missed a Phoenix Splash. SANADA missed another attempted moonsault, but he landed on his feet before catching Ibushi with a Frankensteiner.

They were fighting on the apron when Ibushi hit SANADA with a double foot stomp. SANADA a moment later with a Magic Screw off the apron. That led to them teasing a double countout. They traded strikes until SANADA caught Ibushi in a Dragon Sleeper, but Ibushi was able to escape.

SANADA leapt off the top top into a sit-out powerbomb from Ibushi. After following with a Liger bomb, Ibushi sold his leg. He was slow to capitalize, and SANADA countered the Kamigoye. SANADA executed a Tiger Suplex, but Ibushi kicked out. He kicked out again after SANADA attempted a TKO cutter. 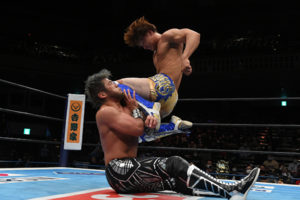 Ibushi countered into a Dragon Sleeper, but SANADA reversed that to apply his own version of a Dragon Sleeper. SANADA adds in a giant swing, and he dropped down into Skull End. SANADA let go to attempt a moonsault, but he missed when Ibushi rolled out of the way.

After a double down, they rose to their feet. Ibushi landed a high kick, and he delivered Bomaye for a near fall. SANADA countered a Kamigoye, and he gave Ibushi a TKO cutter. After a moonsault to the back, SANADA went for another moonsault. Ibushi got his knees up to block the move, and there was a double down.

In a long sequence, they keep reversing the Dragon Sleeper on each other. Ibushi was eventually able to counter into a Bastard Driver. Twice SANADA countered the Kamigoye, and then he used the O’Connor into a bridging cradle. The move previously won SANADA matches in the tournament, but Ibushi kicked out at the last second. This made for the best near fall of the match.

Ibushi with a high kick to set up a jumping knee strike. He followed with a Kamigoye for another near fall, and Ibushi struck again with a second Kamigoye seconds later. Ibushi then covered SANADA, and Red Shoes counted to three. Ibushi is victorious to repeat as the tournament winner.

“Mr. G1” Masahiro Chono presented Ibushi with the ceremonial flag during the trophy presentation. Chono is a legendary figure in the history of G1 and NJPW. He delivered a hopeful message before the match, and he provided guest commentary on the Japanese feed during the bout.

Chono was in the ring after the match to pass a proverbial torch to Ibushi. Ibushi was emotional as he choked down tears and beamed with a huge smile. He thanked the audience in a post-match speech, and talked briefly about the future. “I will become god,” said Ibushi.

Confetti streamers fell from ceiling around Ibushi as he held the trophy and flag. He was triumphant for the second straight year. Later on backstage, he would offer more comments during a post-match press conference.

A Toast To Power Struggle 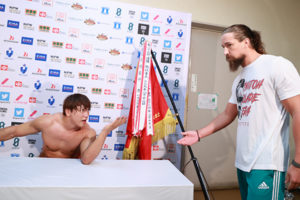 Jay White interrupted as Ibushi was addressing media gathered backstage. White sat down, and Ibushi offered him a drink. They toasted with a Zima, and then White cut a promo on Ibushi.

White dismissed Ibushi as the real tournament winner, and White talked about Ibushi soon being awarded a briefcase. The case contains a title contender certificate for a match at Wrestle Kingdom, which this year is awarded to Ibushi for the second year in a row. White vowed to take that briefcase from Ibushi before the Tokyo Dome show.

As White was talking trash, Ibushi threw some Zima at him. After “Switchblade” left, Ibushi said he welcomed a challenge from White.

Part of the backstory here is White has twice defeated Ibushi this year. White beat Ibushi earlier this year at Wrestle Kingdom in January, and Ibushi also lost to White recently in the G1 tournament.

The angle with White and Ibushi sets up a match at Power Struggle between the two. The briefcase containing the future title shot is on the line when Ibushi faces White on November 7th in the semi-main event at EDION Arena in Osaka.

Announced for the main event at Power Struggle is a grudge match for the double championship. Tetsuya Naito defends his IWGP Heavyweight and Intercontinental Championship against challenger EVIL.

EVIL not only defeated Naito to win the titles earlier this summer, but EVIL also beat Naito in the recent past during G1. Naito regained the titles, yet his recent loss in G1 looms large. Likewise, there is the continuing backstory of their rivalry.

EVIL turned on Los Ingobernables de Japon to join Bullet Club. Underneath the G1 final on the card from Ryogokul, EVIL furthered the rivalry with an attack on Naito. 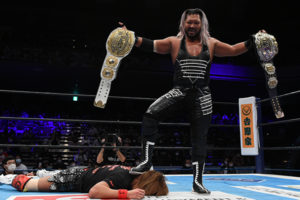 EVIL & Yujiro Takahashi defeated Tetsuya Naito & BUSHI in the semi-main event on the card this past Sunday. At the finish, BUSHI kicked out after Darkness Falls. EVIL then applied a Scorpion Deathlock, and BUSHI tapped out.

Bullet Club further assaulted LIJ in a post-match beatdown. Dick Togo was ringside for the match, and he got into the ring to strangle Naito. EVIL stepped in for Everything Is Evil, and Naito was laid out.

EVIL picked up the two title belts, and stood after Naito holding up the titles. Thus, more heat ahead of their title match at Power Struggle.

Will Ospreay & The Great O-Khan defeated Kazuchika Okada & SHO in a tag team match that showcased a new heel faction. O-Khan & Ospreay won the match in a decisive manner. The win helps build up O-Khan before he faces Okada on the card for Power Struggle.

Ospreay targeted a SHO’s leg, which led into the finish. Bea Priestley also interfered to give SHO a dragon screw, furthering injuring the leg. Ospreay then applied a figure four leglock, and SHO tapped out. 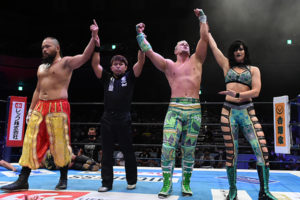 Meanwhile, Okada tried to make a save. O-Khan cut him off, and then gave him an ironclaw slam. The heels stood tall over the babyfaces in the end.

“Ace” Looks For Revenge Against KENTA

Tanahashi submitted Gedo using a Texas Cloverleaf hold to win the match. Tanahashi and KENTA had a staredown after the match.

KENTA in their G1 tourney match whacked Tanahashi with his US title contender briefcase. The impact left a visible crack in the briefcase, and KENTA noted it as such. He taped a note to the case with an arrow pointing to the crack.

KENTA faces Tanahashi with the US title contender briefcase on the line at Power Struggle. 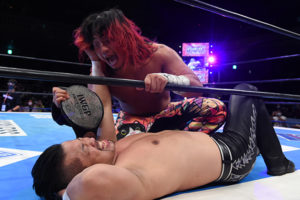 Shingo Takagi & Hiromu Takahashi defeated Minoru Suzuki & Yoshinobu Kanemaru in another match on the undercard from Sunday. Much of the focus was on Suzuki and Takagi, as they battled one another during the bout.

Hiromu delivered a Time Bomb, and he pinned Kanemaru for the finish. Afterwards, Suzuki and Takagi continue to fight after the bell. They brawled at ringside, and they had to be separated from each other.

Suzuki is set to defend his NEVER Openweight Championship against the former champion Takagi at Power Struggle. Takagi is not only a strong challenger, he is also a former champion. Suzuki beat him for the title earlier this summer. Takagi looks to regain the championship in November.

While Suzuki and Takagi had their brawl, Hiromu looked to send a message. He stood over Kanemaru holding the IWGP Junior Heavyweight Tag Tag title belt. Kanemaru hold the tag championship alongside El Desperado. Possibly, Hiromu and a partner challenge for the tag titles in a battle between pitting LIJ aghaints Suzuki-gun.

Lots of brawling in the eight-man tag, which is very similar to other matches involving Suzuki-gun. Sabre assisted Taichi in giving YOSHI-HASHI a spike Black Mephisto, and then DOUKI pinned YOSH-HASHI.

The brawling continued after the match when Suzuki-gun jumped the CHAOS members. The heels laid out the babyfaces. Sabre moves on to Power Struggle, where he is set to challenge Toru Yano for the King of Pro Wrestling 2020 trophy.

Power Struggle takes place on November 7th in Osaka at EDION Arena. Ahead of the supercard is a series of house shows billed as Road To Power Struggle. That tour begins on October 23rd from Korakuen Hall in Tokyo.

Next Show: Road To Power Struggle from Korakuen Hall in Tokyo on October 23 (lineup TBA)