EVIL and Tetsuya Naito emerge as points leaders atop B Block after night 14 of G1 Climax 30. The former double champion defeated the current holder of the top singles championships, and now EVIL matches him for tournament points. EVIL beat Naito in a non-title tournament match on Sunday at the Aichi Prefectural Gymnasium in Nagoya.

The latest chapter of their rivalry leaves EVIL tied with Naito at the top of B Block, with each at 10 points after seven rounds of block matches. EVIL winning the tournament bout also opens other possibilities, like a return title match for the double championship. They traded wins, and the titles, early this summer.

Tetsuya in July dropped the double championship to EVIL at Dominion in Osaka. EVIL held the IWGP Heavyweight and Intercontinental Championship for a short time, and then Naito regained the belts from EVIL in August at an outdoor baseball stadium in Tokyo.  They were even in recent encounters until Sunday when EVIL pinned Naito.

Beyond the championships, a defining moment in their feud was EVIL turning on Naito. Upon leaving the faction known as Los Ingobernables de Japon, EVIL joined Bullet Club. In G1 this year, EVIL strikes again on this quest against Naito. However, now EVIL has help in the form of Dick Togo.

Everything is EVIL Outdoes The Destino

EVIL beat Naito to join his former ally at the top of B Block. Instead of the double championship at stake, EVIL gains crucial points in G1. He also now holds a tie-breaking win over Naito in the tournament, if the standings come down to that.

Dick Togo interfered often on behalf of EVIL. Naito baited them, knowing they could not help themselves in trying to cheat. Naito’s strategy was working until the numbers game caught up with him. Togo tripped Naito, and then pulled him out of the ring. With EVIL distracting the referee, Togo attacked Naito at ringside.

EVIL swung for the fences hitting a standing Conchairto, and EVIL got heat on Naito. He fought back, and Naito rallied on EVIL. Naito also hit Togo with a baseball slide, and Naito was on the offensive.

Togo tried to interfere again, but EVIL runs into him by mistake. Naito tries tying up EVIL’s neck in a submission hold. EVIL escaped, and he fought back to give Naito a superplex. EVIL then applied a Scorpion Deathlock.

Naito gets free and delivers Gloria. His rally dashed moments later, Naito takes a shot into an exposed turnbuckle. Planted with a Tiger suplex, Naito then eats an ax bomber. Somehow, Naito still kicked out when EVIL covered him.

Countering the Darkness Falls, Naito dropped EVIL with a partial Destino. EVIL rose again to deliver Darkness Falls for a near fall. Togo caused a distraction, and EVIL hit below the belt with a low blow.

Chairs thrown in the ring were red herrings. The referee was distracted by the chairs, and Red Shoes did not see Togo strangling Naito. Nevertheless, Naito whacked Togo with a kick.

EVIL had time enough to recover, thanks to Togo. Naito executed a Destino for a close near fall. He went to launch into another Destino, but EVIL had a counter. It was Everything is Evil, and then EVIL covered Naito for the deciding pinfall. He cut a sinister promo in post-match speech.

With the outcome of their match, both EVIL and Naito have a record of five wins and two losses. They both have a total of 10 points so far in the tournament.

Hirooki Goto defeated Hiroshi Tanhashi after an exciting finish in a great bout. Goto went into the match with an injury, as his shoulder was taped again. That played into the contest, as did Goto selling his leg. Goto was able to overcome his injuries, and he came back to counter “The Ace” in the end.

Tanahashi early on targeted a leg. Goto came back with a running bulldog. “Ace” went right back to working the leg, cutting off Goto. Tanahashi went for the Texas Cloverleaf, but Goto reached the ropes. Although Tanahashi went back to the leg, Goto was able fight back. Goto went on to deliver an ushigoroshi.

They rose up after a double down to exchange strikes, throwing haymakers at each other. Tanahashi fell in a heap, but moments later he countered a Dragon Sleeper. “Ace” rallied before landing a sling blade for a two count. A palm strike rocked Goto, and he crumpled.

Tanahashi climbed to the top rope, and Goto somehow rose to the feet. He joined Tanahashi on the turnbuckles for an avalanche spot. Goto off the top with a super ushigoroshi, stunning Tanahashi. Still selling the leg, Goto crawled over to cover Tanahashi. “The Ace” somehow kicked out.

Goto leveled Tanahashi with a kick. Tanahashi takes a modified GTR, yet he is able to offer a reversal. Goto connects with solid GTR to cover Tanahashi for a pinfall.

Goto survives to bring his record to 4-3, earning him eight points so far. Tanahahshi moves to 3-4, giving him six points.

Rounding Body Press For The Win

SANADA pinned Juice Robinson after Cold Skull and a moonsault press. For some reason, the Japanese announcers continue to call the moonsault a “rounding body press”. Tune in to the G1Cast for more on that mystery.

Grappling in the early portion of the match, and that gave way to SANADA landing a nice dropkick. Robinson answered back with a spinebuster, and SANADA sought refuge outside the ring. He found none, and Juice whipped him into the guardrail.

Juice was in control until missing a cannonball. SANADA with more counters moments later, and he went on to tie up Robinson in a Paradise Lock. Robinson later countered a moonsault, and he gave SANADA a full nelson slam. Juice rallied to deliver the cannonball.

Working the crowd with hand claps and foot stomps, Robinson built excitement for his superplex/jackhammer combination. Victory seemed near for Juice, but SANADA dodged the Left Hand of God. SANADA caught Robinson in a Dragon Sleeper.

Robinson escaped the sleeper, and briefly hooked into a small package. SANADA caught him again in the Dragon Sleeper, and punished him even more with a giant swing. SANADA locked in Cold Skull, breaking his grasp only to climb the ropes. Moonsault off the top rope, and SANADA scored a pinfall using the “rounding body press”.

After dropping his first three, SANADA went on to win his last four matches. He improves to a 4-3 record, giving him eight points. Robinson falls to a 3-4 record for six points.

KENTA Beats Yano At His Own Game

KENTA defeated Toru Yano via countout, which is comedic irony. Yano in previous matches was notorious for using tape against his opponents. KENTA in this match taped Yano to a part of the set, making him proverbially taste is own medicine.

Yano could not answer the 20 count, and he eventually had to get freed from the tape with scissors. Poor Yano was despondent. Beat at his own game.

Lots of gaga in the bout, beginning with a standoff. KENTA wielded his briefcase, and Yano brandished a turnbuckle cover. They both put down their weapons, and had a Larry Zbyszko stalk-off. They each powdered outside, both stalling. Soon they would battle over a bottle of disinfectant.

Yano is sprayed in the face with the disinfectant, and he freaks out. The referee is caught up in the chaos, and he gets disinfectant poured on his face as well. The ref goes down, and KENTA drags Yano up the entrance ramp.

The ref started a twenty count, but Yano was stuck on the stage. KENTA hustled back to the ring to answer the count, but not Yano. KENTA won via countout, having beaten Yano at his own game.

KENTA’s record moves to 3-4, netting him six points in the tournament. Yano has a matching record that put him at 3-4 for six points.

Another great performance from YOSHI-HASHI, yet he lost again. Zack Sabre Jr. grounded him at the outset, taking him down to the mat. YOSHI-HASHI fought from underneath to shine.

Sabre targeted an arm, looking to injury YOSHI-HASHI. He saved himself with rope breaks. Sabre tortured the arm, but YOSHI-HASHI fired up with a flurry.

YOSHI-HASHI flipped the script, and he tied up Sabre in a hold. Sabre sought shelter in the ropes. A shoulder breaker from Sabre, and he was back working the arm. YOSHI-HASHI still fired up, challenging Sabre to strike him.

YOSHI-HASHI hit Sabre with a lariat, and then double knees for a near fall. YOSHI-HASHI followed with a thrust kick in a great sequence.

Sabre tries transitioning into an armbar, but YOSHI-HASHI fought the hold. A counter into a roll-up was unsuccessful, as Sabre hung on waiting for an opportunity. Trying to deadlift him off the mat, YOSHI-HASHI made one final effort to free himself. In doing so, that gave Sabre the chance to trap both arms.

YOSHI-HOSHI, with his hands trapped behind his back, had nowhere to go. Sabre won via submission.

Sabre improves to a 4-3 record, giving him eight points. Eliminated from contention, YOSHI-HASHI drops to a 1-6 record with only two points.

Yet Another Outstanding Opener

The card in Nagoya opened with Young Lions in non-tournament action. Gabriel Kidd defeated Yota Tsuji in an exciting bout. The Young Lions are adding new moves, and their opening matches continue to impress.

Tsuji was control with a senton and a standing leglock. He delivered a powerslam, and applied a Boston crab. Kidd got a rope broke, and he soon fired up into a dropkick. Kidd followed with the Billy Robinson underhook suplex, and Kidd pinned Tsuji.

The tournament continues on Tuesday in the Shizuoka Prefecture for a B Block card at the city arena in Hamamatsu.

Next Show: Tuesday from the Shizuoka Prefecture at the city arena in Hamamatsu starting at 2:30 AM PDT/5:30 EDT/10:30 BST 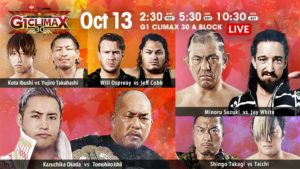