Back in January, WWE announced something new and interesting for their annual Royal Rumble show. The reigning, defending WWE champion Brock Lesnar was going to be among the 30 men competing. Not only that, but in what would become a stunning act of hubris, he declared himself the first entrant in the match. That’s right: instead of being the big bad boss that you’d face after completing your journey, he was going to be waiting for you at the beginning of the level. To prove no one was worthy to challenge him at Wrestlemania, Lesnar was eschewing the middle man to get his mauling done early. This was the chance for Lesnar to show how head and shoulders he was to the rest of the roster, but also begged for someone to step up and show otherwise.

And oh buddy, if that isn’t exactly what happened.

Drew McIntyre, with the timely hockey-assist low blow from Ricochet, would arrive at entry #16 and Claymore Kick Lesnar straight out of the ring and the match. From there, McIntyre would eliminate five more competitors, including former world champions The Miz, Seth Rollins, and lastly Roman Reigns to win the match and the right to challenge Lesnar at Wrestlemania 36.

At long last, Drew was on top of the world. From his initial WWE run to becoming a sensation on the UK and American independent scene, Drew was poised to become WWE’s next big babyface star.

Sadly, this would be the emotional high point for Drew McIntyre, WWE, and the wrestling world at-large for the year 2020. The COVID-19 pandemic would force the country briefly into total shutdown shortly before Wrestlemania 36. Drew would not get his big crowning moment in front of tens of thousands in Tampa, where he eventually went on to defeat Brock Lesnar for the WWE championship. In fact, he beat Lesnar in front of virtually no one, as WWE was still trying to figure out its television presentation at the time while settling on the empty arena situation in the meantime.

The show was so strange that a big question remained following a title win in front of no crowd: Would Vince McMahon get cold fe 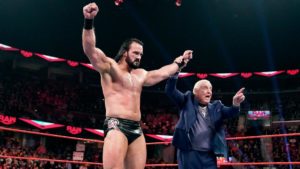 et and blame the looming downturn in business on his new champ?

Fortunately for us, and McIntyre, that did not appear to be the case. In fact, what Drew has accomplished in this brave, new era of professional wrestling is quite admirable. A wrestler of lesser charisma would be dead on arrival. Imagine someone like The Ultimate Warrior, himself winning a huge match at Wrestlemania 6, being forced to cut promos to absolute silence following the biggest win of his career. Vince McMahon would have gone back to Hulk Hogan as soon as the next televised event would allow him.

No, Drew walked that line of being a cool and confident babyface while kicking ass and taking names along the way. He oozed confidence. He spoke directly to the camera as comfortably as he would have a crowd of 10,000 on RAW. He was the right champion for a new, strange time.

Beyond being the main character of the two biggest shows on the calendar, the remainder of the year has also been aces for McIntyre. He immediately defended his new championship on the Raw after Wrestlemania against the Big Show before working a program with Seth Rollins. Drew would next feud with Bobby Lashley and his new manager MVP, both of whom are also enjoying a bit of a career renaissance this year. I would go so far as to say the McIntyre feud, which Lashley would lose, contributed directly to The Hurt Business being taken so seriously on RAW. He even had his obligatory new world champion feud with also ran Dolph Ziggler, and even that made a ton of sense as Drew was reintroduced to audiences as Dolph’s heavy upon his return to main roster WWE in 2018.

This was all leading to a feud with Randy Orton, which has carried on from Summerslam and will continue at this weekend’s Hell in a Cell show. Whether he remains champion following the show or not, one thing is clear: no one has meant more to WWE programming since the start of the pandemic and Thunderdome era than Drew McIntyre.