Hello, fight fans, and welcome to this week’s edition of the Monday MMA Round-Up. It was quite the weekend in the world of mixed martial arts, with the big event being UFC 253 in the return to Fight Island. There was no shortage of news from the show, and from the week as well, so let’s get into things with my thoughts on the week that was.

Here’s the finish of that exchange. Pre covid. Pre retirement.
Never turned down offer of Tony as was suggested at the time. I stated months in advance (early February) that I was not interested in being an alternate for two consistent pullouts.
Pushed for my own scheduled bouts pic.twitter.com/jXQD2dTWrL

Here are the fights I would make for some of the winners and losers at UFC 253:

The UFC keeps their 2020 schedule rolling with their second of five straight Saturday events in Abu Dhabi. UFC On ESPN 16 takes place on Saturday, headlined by a pivotal women’s bantamweight fight between Holly Holm and Irene Aldana. Also on the main card is Yorgan De Castro vs. Carlos Felipe, Germaine de Randamie vs. Julianna Pena, Tom Breese vs. KB Bhullar and Dequan Townsend vs. Dusko Todorovic. One of the big fights on the prelims sees Carlos Condit vs. Court McGee. The main card airs on ESPN at 10:30 PM eastern time, while the prelims kick off at 7:30 PM eastern time on ESPN+.

This is also a big week for Bellator, which will hold two events in Milan, Italy, including their debut on the CBS Sports Network on Thursday. That event, Bellator 247, will be headlined by Paul Daley vs. Derek Anderson, and will kick off at 4 PM eastern on CBS Sports Network. Their event on Saturday, Bellator Euro Series 9, will be headlined by James Gallagher vs. Cal Ellenor, and will air on Bellator.com at 5 PM eastern time on Saturday.

In other MMA events, Brave CF 43 airs on internet stream on Thursday at 1 PM eastern time and LFA 92 will take place on Friday, airing on UFC Fight Pass at 9 PM eastern time. 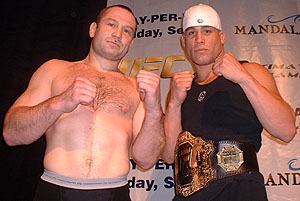 On September 28, 2001, one of the most important events in the history of mixed martial arts took place, and a landmark event that is very polarizing. UFC 33 took place in Las Vegas, Nevada, the very first event sanctioned by the Nevada State Athletic Commission. The show took place at the Mandalay Bay, and marked the beginning of a very long and profitable relationship between the UFC and the city of Las Vegas, which is still home to the company to this day.

However, it remains one of the worst events in the history of the UFC, with three title fights, and the five main fights all went the distance. The pay-per-view feed actually cut out during the main event between Tito Ortiz and Vladimir Matyushenko, and was the last time the UFC scheduled more than five main card fights on pay-per-view for over ten years. It is often referred to by Dana White as the worst event in UFC history.