Hello, fight fans, and welcome to this week’s edition of the Monday MMA Round-Up, where we look back at all of the happenings of the past week in the world of mixed martial arts, and look ahead to what is coming up. This past week had some UFC action, while the upcoming week is full of events, so let’s dive right in.

Looking Back At UFC On ESPN+ 34

Here are the fights I would make after UFC On ESPN+ 34:

The UFC continues on with more fights during the pandemic, as UFC On ESPN+ 35 takes place on Saturday at the UFC APEX in Las Vegas. Michelle Waterson vs. Angela Hill is the headline fight as both look to get back into the win column. Also on the main card is Ottman Aziatar vs. Khama Worthy, Roxanne Modafferi vs. Andrea Lee, Ed Herman vs. Mike Rodriguez and Billy Quarantillo vs. Kyle Nelson. Among the prelim fights are Alan Patrick vs. Bobby Green and Roosevelt Roberts vs. Matt Frevola. The entire show airs on ESPN+, with the prelims kicking off at 5 PM eastern time and the main card starting at 8 PM eastern time.

Bellator will be holding two events, with shows on Friday and Saturday from the Mohegan Sun Arena in Uncasville, Connecticut. Bellator 245 takes place on Friday and will be headlined by Lyoto Machida vs. Phil Davis, with a co-main event of Cat Zingano vs. Gabby Holloway. Bellator 246 takes place on Saturday as the vacant Bellator Bantamweight Championship is on the line in the main event between Juan Archuleta and Patrick Mix. Also on that card is Jon Fitch vs. Neiman Gracie, Liz Carmouche vs. DeAnna Bennett and Derek Campos vs. Roger Huerta. Both shows will air on the Paramount Network at 10 PM eastern time.

Dana White’s Contender Series is back for Week 6 of their 2020 run on Tuesday at 8 PM ET on ESPN+. LFA 91 takes place on Friday, airing at 9 PM ET on UFC Fight Pass. For the fans of bare knuckle boxing, BKFC 12 will take place on Friday night as well. 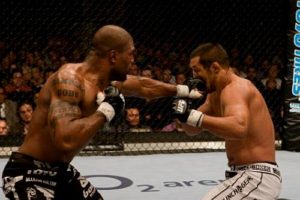 On September 8, 2007, one of the highest-rated MMA events on television took place with UFC 75 in London, England. In what ended up as being the most-watched televised MMA event in history at the time with over 4.7 million viewers and a peak of of 5.93 million viewers, Quinton “Rampage” Jackson successfully defended the UFC Light Heavyweight Championship over Dan Henderson, winning a unanimous decision in front of 16,235 fans at the O2 Arena.

In the co-main event, Michael Bisping scored a split decision win over Matt Hamill in one of the most controversial decisions of all-time. Also on the show, Cheick Kongo defeated Mirko Cro Cop by unanimous decision, Marcus Davis submitted Paul Taylor in the first round, and Houston Alexander knocked out Alessio Sakara in the first round.