G1 Climax 30 is officially underway after a strong opening night of A Block matches in Osaka. The 3oth edition of the annual round robin tournament began in EDION Arena on Saturday. Kota Ibushi and Kazuchika Okada in the main event crafted another chapter in their series of incredible matches.

Coming off a loss to Okada earlier this year in the Tokyo Dome, Ibushi nevertheless again defeated Okada in the G1 tournament for a measure of retribution. Ibushi won a pivotal bout over Okada deep into the tourney last year, which decided their block. Ibushi went on to win G1 in 2019.

On opening night of the 2020 edition of the tournament, Ibushi pinned Okada clean in just over 20 minutes to win the match in EDION Arena. The outstanding match was the conclusion to a card of matches ranging from good to excellent.

As they battled past the 20 minute mark, Ibushi was able to counter the Rainmaker clothesline. Bomaye and a Kamigoye sealed Okada’s fate in the closing moments, and Ibushi covered him for the victory.

Any worries about whether G1 could live up to its reputation despite the pandemic era were alleviated with the atmosphere on night one. Some of the matches were very dramatic, and all were good. The crowd reactions may have been the best of any New Japan show since the pandemic. They were at least more audible than other shows this year.

Though subdued somewhat in the volume of their voices, the crowd was energetic and invested in the stories of the matches. The wrestlers themselves delivered the kind of performances viewers have come to expect for G1.

“Switchblade” Returns to Face “The Dragon”

Besides Ibushi defeating Okada, four other A Block match-ups delivered quality bouts. The semi-man event was Jay White’s return bout to Japan after months of not having wrestled in the country. Ever the villain, White basked in jeers from the crowd on his way to squeak out a win over Shingo Takagi in a match that had perhaps more real heat than any match since the pandemic.

White played the antagonist opposite the protagonist of Takagi. White’s stalling early was on a level matched only by the likes of Larry Zbyszko. White, with Gedo’s help in his corner, eventually resorted to cheating in vanquishing the “The Dragon” in this battle. Late in the match came a dreaded referee bump. Red Shoes went down, and Takagi was able to cover White for a phantom three count. No one to count the fall, but also no ref to see White deliver a low blow.

Though White went on to win this battle, Takagi showed plenty of fortitude and fire. They traded several close near falls throughout, but the low blow finally turned the tide. Takagi was able to kick out one more time until White used to Blade Runner to finally pin Takagi.

Suzuki and Ishii Have a Banger

Third from the top was an absolute banger between Minoru Suzuki and Tomohiro Ishii. They collided in a hard-hitting bout that started as a slugfest, and only intensified more from there. Maybe could have done without the headbutts, as the match looked plenty stiff enough. They nonetheless delivered an enthralling match on opening night.

Suzuki took punishment and flashed his maniacal smile in the face of the determined “Stone Pitbull”. Suzuki in the closing moments countered an attempted suplex, and then delivered the Gotch piledriver to cover Ishii for the deciding pinfall.

Taichi and Hammer Take Down Cobb

Taichi managed to defeat Jeff Cobb in a good match. Stalling and cheating allowed Taichi to gain the advantage, especially after Taichi hit Cobb in his leg with the hammer used to ring the bell. Cobb sold his leg and Taichi targeted it throughout the match.

With Cobb selling an injured leg, Taichi was able to counter a Tour of the Islands. A moment later Taichi used Black Mephisto as the finisher, and he covered Cobb for the pinfall.

Ospreay Declares He is the Best

In the first match that actually kicked off the G1 Climax 30, Will Ospreay returned to Japan to defeat Yujiri Takahashi. They opened the tournament with a solid match, albeit much shorter than rest of the A Block bouts on night one. Ending in under eight minutes, Ospreay delivered a running strike followed by the Stormbreaker. One, two, three, and Ospreay had won the first match in the 2020 G1 season.

Almost more noteworthy than the match was the promo Ospreay cut after the match. Ospreay said he was nervous before his match, but he realized there was no reason for that. Ospreay went on to say that is because he is the best in the world. Playing off the “be the one” slogan for this year’s G1, Ospreay basically said he was the one.

The actual card itself began with non-tournament action. Yuya Uemura submitted Yota Tsuji in a good opener. In Young Lion fashion, Uemura applied a Boston crab for the submission. He wrenched way back, almost turning it into a Liontamer.

G1 continues on Sunday in Osaka with the beginning of B Block. 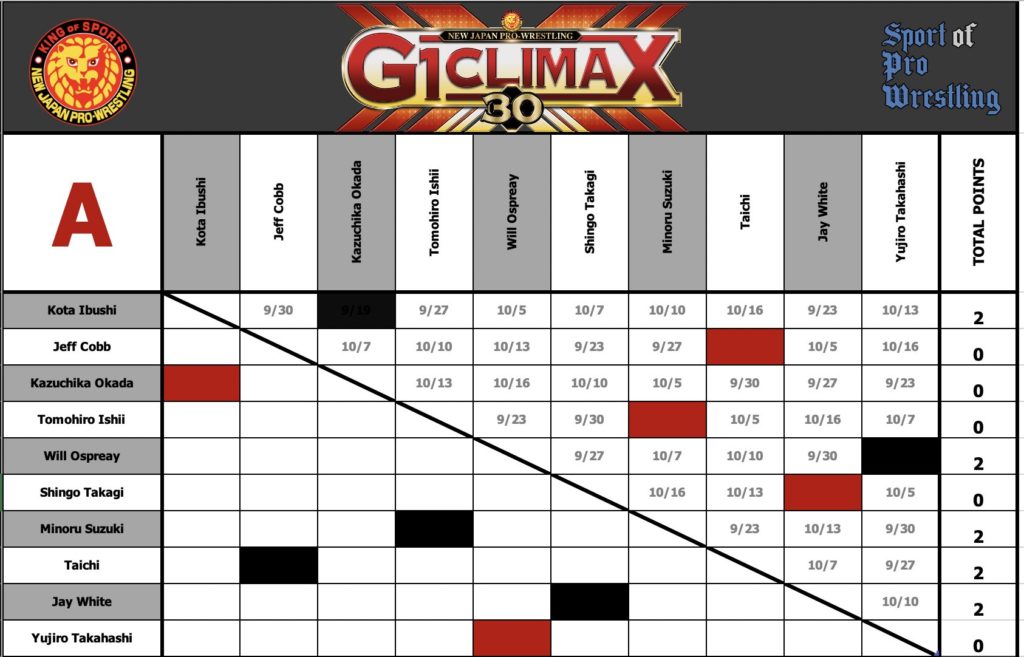 A Block standings after night one: 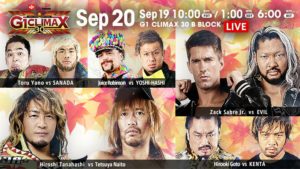