Shane McMahon recently returned to Monday Night Raw as the host of a new segment dubbed “Raw Underground.” In the new segments, Shane O’Mac is the hype man for what is supposed to be an underground fight club within a pro wrestling show. The new role is kind of like a P.T. Barnum version of Dana White.

Raw Underground is now a fixture of the flagship show with many segments over the last couple weeks. Many critics panned the segments. Plenty is there to criticize, but there are some positives to the new concept. Instead of heaping on too much more negativity, let us instead focus on some constructive criticism.

What is it exactly?

The concept itself needs some more explanation. Are these prize fights? So far the staged fights appear rather random with no solid indication of what is on the line. Surely they are not fighting just for the heck of it. Give a reason for them fighting. This could be as simple as Shane O’Mac flashing a wad of cash. 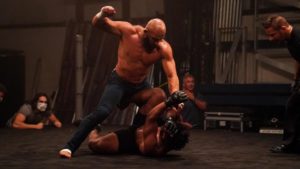 Almost nothing looks more underground than fighting over lots of cash. That premise is the basis for plenty of films and television plots about underground fighting tournaments and such. The plot does not necessarily need to revolve strictly around money. The character portrayed by Jean-Claude Van Damme in Bloodsport was motivated by more than the almighty dollar.

Marketing a Bloodsport theme has already worked in pro wrestling. Game Changer Wrestling helped promote “Josh Barnett’s Bloodsport” last year in New Jersey during WrestleMania weekend. The sold out show from Barnett and GCW had a similar aesthetic to Raw Underground. The wrestling ring had no ropes, and the concept was supposed to look more like a shoot. The GCW indie version is arguably far superior to the version from WWE.

WWE already has someone on the roster familiar with the concept. Before Barnett’s card came “Matt Riddle’s Bloodsport” promoted by GCW the prior year. Riddle with his mixed martial arts background is a natural for Raw Underground. Riddle is instead in a featured role on Smackdown feuding with a cartoonish king.

Besides Riddle, several others on Smackdown have styles that lend themselves to a concept like Raw Underground. Drew Gulak is rarely featured on Smackdown these days. Giving him some wins in worked shoots on Raw Underground could revive and refresh his character. The brand split means very little anymore unless a storyline calls for it to mean something. It still means little even then. A battle royal on Smackdown this past Friday even featured wrestlers from different brands. Besides, something truly “underground” is likely opposed to brand loyalty.

Plenty of talent on the WWE roster have skills that can benefit the presentation of Raw Underground. Utilize what you already have.

Some wrestlers with MMA backgrounds are featured in Raw Underground. Shayna Baszler took on three other women at the same time in a handicap fight she won handily last Monday. Baszler’s style fits with Raw Underground like a glove. Maybe the only problem with her bout, and many of the other worked shoots in Raw Underground, is the fights look far too staged.

WWE ushered in a new way of presenting bouts with the several cinematic matches during this pandemic era. Filming the matches in a more cinematic fashion might remedy the fights looking so staged at times. Even if they would rather save the cinematic matches for special occasions, Raw Underground was still a taped segment. They can do retakes. 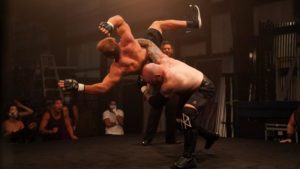 For a such a profitable company, the set for Raw Underground looks very low rent. Sure, the look is supposed to be gritty and underground, but the setting appears to be a storage building full of assorted junk. Is this combat sports or a swap meet?

The setting almost looks like an episode of Hoarders that features underground fighting. Or maybe this is like Storage Wars, but instead of an auction, the combatants are fighting over the contents of a storage unit. At least that would be a prize, and that would explain the assorted items laying around the set.

Maybe production moving from the Performance Center to the Amway Center can allow for a different set. Maybe even a new look that is vastly different than that of a storage closet.

Dick Ebersol and NBC, with the creation of Saturday Night’s Main Event in the 1980s, helped transform the way WWE shot its wrestling matches for television. The style of TV production they adopted is still evident in the modern product. They were still not the pioneers in improving the production of wrestling shows as World Class Championship Wrestling years earlier was producing maybe the slickest TV show of any promotion at the time.

One aspect of WCCW shows of the early 1980s was the use of close-up camera shoots. Viewers were drawn into the action like they were there inside The Sportatorium instead of just watching on TV from home. World Class production techniques offers a fresh take on shooting scenes. Matches on World Class shows have a kind of grittiness that Raw Underground lacks. WWE has world class television production that is superior to almost any other promotion, but sometimes less is more. What is old can also be new again.

No matter what lighting is used to make Raw Underground look darker and different, the camera angles and shots look like any other WWE show. Raw Underground being shot completely different would set it apart from the rest of Raw.

WWE has its own precedent for something similar to Raw Underground. They made a whole movie about it starring Hulk Hogan. No Holds Barred hit theaters in 1989, and the plot featured a fictitious fighting tournament called  “Battle of the Tough Guys.” That introduced the world to the character of Zeus, played by Tiny Lister. 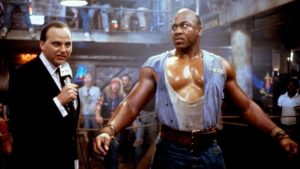 Lister, in promoting the film, even appeared on WWE television in character as Zeus for a series of live wrestling matches. The movie was largely a flop, although it lives on in wrestling lore. Battle of the Tough Guys is part of the movies’ charm as it portrayed shoot fights in an era before MMA changed the perception of what such fighting looked like.

The concept of Raw Underground could still borrow from the set designs used for Battle of the Tough Guys. The film is beyond cheesy, but the sets used in the film looked far more underground than a storage room in the Performance Center. The plot of the movie also includes a solid reason for the tournament of tough guys.

The reasoning for the tournament is even more important in today, and that reason is ratings. In No Holds Barred, a heel television executive is looking for a hit show to counter program the high ratings of the World Wrestling Federation. He comes up with Battle of the Tough Guys. Shane McMahon does not yet appear to be either a babyface or a heel, but much like the TV exec in No Holds Barred, he does need a rationale for organizing these underground fights. The irony between Battle of the Tough Guys and Raw Underground is the creation of both relate to an attempt to improve ratings.

A positive aspect of Raw Underground is it being an avenue for the introduction of new characters. Dabba-Kato is one new character introduced via Raw Underground. He looked like a monster heel winning squashes the last couple of weeks. Possibly he can be an updated version of Zeus that runs through the competition before crossing over to challenge for a WWE championship. That is similar to the plot of No Holds Barred, and such a thing is yet another reason to explain the rationale and motivation for fighting in the first place. 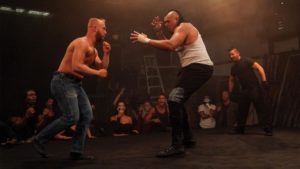 Other wrestlers on the WWE roster are also getting featured in Raw Underground in ways that they would not have otherwise. Riddick Moss returned to television looking strong as part of Raw Underground. Arturo Ruas was able to showcase his martial arts background in another segment of Shane O’Mac’s fight club. Erik of Viking Raiders was able to look like a dominant ass kicker instead of being the butt of jokes. That is an improvement for his character development.

Even an established star like Dolph Ziggler was able to show his skill set includes an extensive amateur wrestling background. Plenty of others with legitimate backgrounds can show their skills. That gives the segments credibility. It could use more of that.

Raw Underground has yet to set the world on fire, nor has it popped the territory. That does not mean the concept should be abandoned. Some improvements can make the concept a viable success. However, there is certainly work to do.

Basically it boils down to structure. The concept of Raw Underground needs more direction. If we can gain a greater understanding of the overall concept for Raw Underground, then we can care more about it. Heck, we might even like it.