“Nothing feels better than going on stage and everybody is singing every word – and actually wanting to see you.”
Toronto artist The Weeknd

Live events create energy and excitement for those participating and those watching. Whether it’s a concert, a sporting event or professional wrestling, attending a memorable event can greatly alter your mood. This is because when we spectate, we feel like we’re part of the action. Endorphins are released and we are happy, excited, nervous and ready to live vicariously through those we are watching. This can happen at a concert when a band plays your favorite song or at a wrestling event when your favorite star is introduced. While every event has the possibility of having memorable moments, sometimes the moments become transcendent. Queen famously gave one of the most iconic performances in history over 35 years ago at Live Aid, in a compact 17 minutes that people still discuss today.

Randy Couture, at the age of 43, recaptured the UFC Heavyweight Championship to a crowd reaction that has become legendary in MMA. And pro wrestling had the greatest crowd ever when an immortal legend took on the most electrifying man in sports entertainment.

Hulk’s Return
The unifying thread between the great crowd reactions for Queen, Randy and Hulk Hogan is the big return. Queen had been on a hiatus prior to their show, Randy had come out of retirement, and Hulk was making multiple big returns. Hulk’s obvious return was to the WWF (now WWE) where he was a multi-time champion, box office king and an absolute legend to a generation of fans. He was the face of WCW and Nitro during the Monday Night Wars vs. the WWF and Raw.

His other big return, however, was to Toronto, Hulk’s city. Can you name a performer who drew over 60,000 fans to the same city in three different decades? Hulk did it in Toronto, first at The Big Event in 1986 vs. Paul Orndorff, then against The Ultimate Warrior in 1990 at WrestleMania VI. Toronto was unquestionably a Hulk Hogan town, and in 2002 it had been a while since Toronto had a fix. When Hulk was in WCW, they rarely ran Toronto, but when they did, he was still seen as a mega star. Hulk was a heel in March, 1999 at a Toronto Nitro when the crowd famously, unexpectedly, turned on DDP and he replied by calling the fans “jack-offs.” WrestleMania 18 was Hulk’s big WWF return to Toronto, and over 60,000 fans were ready to tear the roof off of the SkyDome to welcome him home.

“…there were 68,000 of you Mother Canuckers booing The Rock out of the building!” 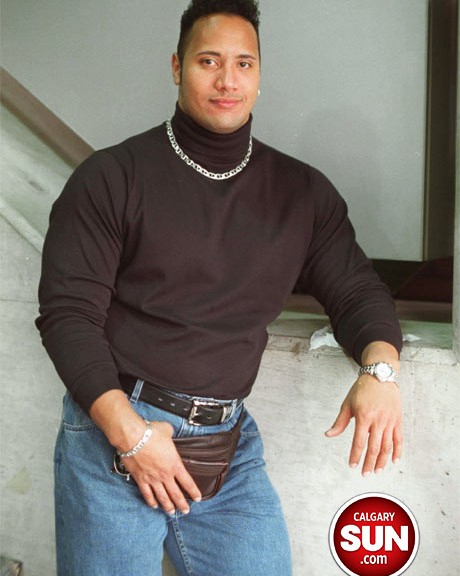 When someone thinks of Canadian professional wrestling stars, it includes some of the greatest of all-time. Names like Bret Hart, Chris Jericho and Roddy Piper all come to mind, but by far the most famous Canadian wrestler is The Rock. Technically at the time of WrestleMania 18, Dwayne Johnson was not a Canadian citizen, but his father, Rocky Johnson, was a Canadian and The Rock had a special connection with Canada, including a short stint in the CFL. The Rock would become a dual citizen more than a decade after this show. He was a massive star in Toronto, and even headlined a Sky Dome show vs. Stone Cold Steve Austin over a year before they first met at WrestleMania. Possibly The Rock’s most important Canadian connection was his most famous photo, when he was a Sunshine Boy for the Calgary Sun.

Aside from his Canadian connection, The Rock was on his way to becoming a megastar in Hollywood, having appeared in the big budget The Mummy Returns film and was the lead for the upcoming The Scorpion King movie. The Rock, the soon-to-be-Canadian, and arguably the biggest star in the WWF, was about to be booed out of the building in Toronto.

The best match ever is Hogan/Rock. When I ask my friends their all time favorite, if they say anything else…I can determine they haven't grasped what wrestling is yet. https://t.co/wt3j2qZIgW

The Match
WrestleMania 18 was a show filled with interesting matches. There was Ric Flair vs. Undertakerand HHH vs. Chris Jericho. There was Live Audio Wrestling co-host Trish Stratus and her matching maple leaf outfit.

But the one match that everyone in attendance wanted to see was Hulk Hogan vs. The Rock. It was not for a title, and it really didn’t need to be. The terms “Dream Match” and “Superfight” get thrown around a lot in wrestling and combat sports, but very few matches live up to that moniker. The Rock vs. Hulk Hogan was different. The WrestleMania X-8 match pitted the biggest superstar of his era against the biggest superstar of the current era. It put arguably the biggest superstar in Toronto wrestling history against a rival that was a perfect foil. And it happened at a time before Dana White famously called Canada the mecca of MMA, when Toronto was possibly the hottest wrestling city in the world.

This was a perfect storm of elements coming together to make for a memorable match. The size of the reaction was not surprising, although the way that the reactions were divided did surprise some. The Rock went into the match as the baby face, but as anyone in Toronto could have told you beforehand, everyone was there to cheer Hulk Hogan, including me wearing the Hulkamania bandana my father purchased for me as a little kid twelve years earlier for WrestleMania VI.

The opening to the nWo music started to play, and the SkyDome was electric. Hulk came to the ring and the energy just intensified from there. Rocky came out and the crowd was roaring. I have seen hundreds of concerts, multiple UFC shows, baseball galore, and Raptors games from the early years against Michael Jordan at SkyDome. But when The Rock and Hulk Hogan stared each other down and then locked up, The SkyDome became the loudest arena I have ever been in. The Rock and Hulk Hogan went back and forth in the most memorable match in WrestleMania history. The match ended with the proverbial “passing of the torch” as The Rock pinned Hulk Hogan clean in the middle of the ring. The crowd was not disappointed, however. Hulk was their guy, but Hulk had also passed the torch to The Ultimate Warrior in the same building before and everyone knew he was ok after that.

“The audience is the fourth character. That audience is just as important in many respects as anything.”
Eric Bischoff

The Aftermath
Having been the home of two hugely successful WrestleManias, the most attended Monday Night Raw in history and multiple house shows with attendances over 20,000, it seems safe to say that the SkyDome has become a legendary wrestling venue. Unfortunately, WrestleMania X-8 was the last wrestling show to take place in the building. In spite of its history of great gates, the WWF (now WWE) has run shows at smaller Toronto arenas. There have been rumors of another Toronto WrestleMania, but nothing has ever come of them.

Hulk Hogan has officially retired from professional wrestling and was inducted into the WWE Hall of Fame in 2005, and then removed, before being reintroduced.

The Rock is the biggest star in the world. He has also embraced tequila in the same way tequila makes people embrace a toilet bowl.

The wrestling wars shifted from Monday to Wednesday nights. It once again pits Jericho vs. HHH in a battle fewer people care about.

My red and yellow Hulk Hogan bandana has been lost to time.