Hello, fight fans, and welcome to this week’s edition of the Monday MMA Round-Up. This past week was a busy week of news, with the UFC and Bellator each running an event, and this upcoming week is a big one. Let’s break it all down.

Thoughts On This Past Week:

Here are fights I would make following both UFC On ESPN+ 32 and Bellator 242:

The UFC has a major event this week, with one of the biggest fights of 2020 taking place. UFC 252 is on Saturday, August 15, with a trilogy to be decided in the main event as UFC Heavyweight Champion Stipe Miocic and former champion Daniel Cormier settle the score and determine the greatest UFC heavyweight of all-time. The rest of the pay-per-view card is Sean O’Malley vs. Marlon Vera, Junior Dos Santos vs. Jairzinho Rozenstruik, John Dodson vs. Merab Dvalishvili and Magomed Ankalaev vs. Ion Cutelaba. The event is available for purchase on ESPN+ and the main card starts at 10 PM eastern time. The prelims kick off at 6 PM eastern time on ESPN.

Dana White’s Contender Series is back for week two of 2020 on ESPN+, airing Tuesday at 8 PM eastern time. 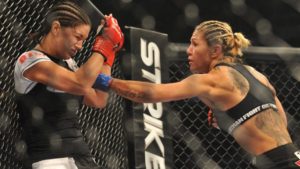 It was one of the most-anticipated fights of 2009 as Gina Carano and Cris Cyborg were headlining a Strikeforce event. It was a landmark moment in MMA, the first time women headlined a major MMA event. The show drew a huge crowd in San Jose and garnered a lot of interest in the sporting world.

Cyborg would go on to finish Carano with just one second left in the first round, in a fight she largely dominated, to become the Strikeforce Women’s Featherweight Champion. It would establish Cyborg as the most dominant female fighter in the sport, but was also the final fight of Carano’s career. Also on the show, Gegard Mousasi knocked out Renato Sobral to become the Strikeforce Light Heavyweight Champion, Gilbert Melendez finished Mitsuhiro Ishida to retain the Interim Strikeforce Lightweight Championship, and Fabricio Werdum submitted Mike Kyle.

You can watch the Carano vs. Cyborg fight on UFC Fight Pass here: https://ufcfightpass.com/video/31868.