Hello, fight fans, and welcome to this week’s edition of the Monday MMA Round-Up. After a couple of crazy news weeks, this was a relatively tame week in the world of mixed martial arts. Let’s dive into the recent happenings.

Looking Back At UFC On ESPN+ 33

Here are the fights I would make after UFC On ESPN+ 33:

It may be Labor Day Weekend, but there will still be plenty of action in the world of mixed martial arts.

The UFC runs on Saturday in Las Vegas with UFC On ESPN+ 34 at the UFC APEX. Alistair Overeem takes on Augusto Sakai in the main event. Other main card fights include Ovince Saint Preux vs. Alonzo Menifield, Sijara Eubanks vs. Karol Rosa, and Michel Pereira vs. Zelim Imadaev. The entire show will stream on ESPN+, with the prelims kicking off at 6 PM eastern time, and the main card airing at 8 PM eastern time.

Dana White’s Contender Series is back for Week 5 on Tuesday at 8 PM eastern time on ESPN+. On Friday, LFA 90 takes place, airing on UFC Fight Pass at 9 PM eastern time. 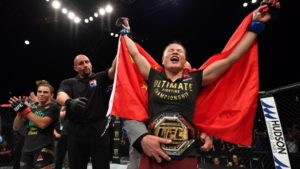 Just one year ago, on August 31, 2019, history was made in Shenzhen, China as the first-ever Chinese UFC champion was crowned.

Zhang Weili captured the UFC Women’s Strawweight Championship when she finished Jessica Andrade in just 42 seconds in wild fight. Weili rocked Andrade early, and a barrage of knees and punches ended it early.

Weili remains the champion a year later and is coming off one of the best fights in UFC history in her win over Joanna Jedrzejczyk in March, and fans are eagerly anticipating her next bout. Andrade, meanwhile, is still looking to get back into the win column since then, and is making the move up to the flyweight division for her next fight.

You can watch the event on UFC Fight Pass here: https://ufcfightpass.com/video/98279?playlistId=2939.