Hello, fight fans, and welcome to this week’s edition of the Monday MMA Round-Up, where I give thoughts on the week that was and the week that is ahead in the world of mixed martial arts. We are coming off of just a single UFC event this past week, but this week is ramping up to be a busy week, so let’s dive right in.

Thoughts On The Week

Here are some fights I would make following UFC On ESPN+ 31:

The UFC holds another event this week as UFC On ESPN+ 32 takes place on Saturday. The entire event will stream on ESPN+, with the main card at 9 PM eastern time and the prelims starting at 6 PM eastern time. Derrick Lewis takes on Aleksei Oleinik in the main event. Other main card fights include Omari Akhmedov vs. Chris Weidman, Maki Pitolo vs. Darren Stewart, Yana Kunitskaya vs. Julija Stoliarenko, and Beneil Dariush vs. Scott Holtzman.

Bellator is back this week with Bellator 243 on Friday, airing at 10 PM eastern time on the Paramount Network. Michael Chandler battles Benson Henderson in the main event. Other main card fights are Matt Mitrione vs. Tim Johnson, Myles Jury vs. Georgi Karakhanyan and Curtis Millender vs. Sabah Homasi. The prelims feature the return of Valerie Loureda as she takes on Tara Graff.

Dana White’s Contender Series is back this week for the first show of the season, airing on ESPN+ on Tuesday at 8 PM eastern time. Ten fighters will be competing to impress Dana White and matchmakers Sean Shelby and Mick Maynard in hopes of earning a contract to fight in the UFC. 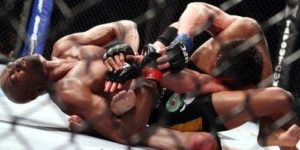 On August 7, 2010, one of the all-time great UFC title fights took place in Oakland, California, and one of the biggest upsets of all-time almost happened, but instead one of the greatest comebacks in UFC history was witnessed.

The then Oracle Arena was the site of UFC 117 on this day, which was headlined by UFC Middleweight Champion Anderson Silva defending against Chael Sonnen in an anticipated fight. There was tons of trash talk coming into the show courtesy of Sonnen, who built the fight up into a huge deal. He almost delivered on his talk as he dominated Silva throughout four rounds, and was looking at a clear decision win when in the fifth round, Silva found a triangle choke and Sonnen was forced to tap, cementing one of the greatest comebacks in UFC history.

Also on the show, Jon Fitch beat Thiago Alves, Clay Guida defeated Rafael Dos Anjos, Matt Hughes submitted Ricardo Almeida, and Junior Dos Santos scored a decision win over Roy Nelson. It was one of the more successful shows of 2010 for the UFC as it garnered 600,000 buys on pay-per-view, which exceeded expectations going in.