Hello, fight fans, and welcome to this week’s edition of the Monday MMA Round-Up, looking back at the week that was in the sport of MMA. It was a big week with UFC 251 going down on UFC Fight Island, and there is another big week of fights ahead, so let us dive right in.

Fights To Make After UFC 251

Here are the fights I would like to see made following UFC 251:

This is another big week for the UFC on Fight Island, as they will bring us two shows from Abu Dhabi.

First up is UFC Fight Night: Kattar vs. Ige on Wednesday. That event airs entirely on ESPN, with the main card at 10PM eastern time and the prelims at 7PM eastern time, with both also being simulcast on ESPN+. The main event is Calvin Kattar against Dan Ige in what should be a great fight. The rest of the main card sees Tim Elliott vs. Ryan Benoit, Jimmie Rivera vs. Cody Stamann, Molly McCann vs. Taila Santos, and Abdul Razak Alhassan vs. Mounir Lazzez.

On Saturday, it will be UFC Fight Night: Figueiredo vs. Benavidez 2. The main card of that event streams on ESPN+ at 8PM eastern time, with the prelims airing on both ESPN and ESPN+ at 5PM eastern time. The vacant UFC Flyweight Championship is on the line again in the main event as they run it back with Deiveson Figueiredo against Joseph Benavidez. In the co-main event, it is a great middleweight bout as Jack Hermansson takes on Kelvin Gastelum. Rounding out the main card is Marc Diakiese vs. Rafael Fiziev, Ariane Lipski vs. Luana Carolina and Alexandre Pantoja vs. Askar Askarov.

There is another LFA show airing on UFC Fight Pass on Friday as LFA 85 streams at 9PM eastern time. There is also lots of regional action taking place as the sport of MMA ramps up even more during the pandemic. 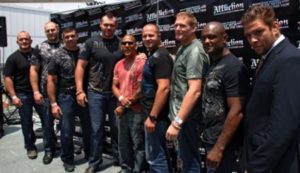 July 19, 2008 felt like something was happening in the world of MMA. Pride was long gone, Strikeforce existed but was still running small events, Elite XC existed but would be done in just less than four months later, and the UFC was all the rage (and they already had the WEC under Zuffa control).

Affliction, which was a big-time clothing company that catered to the MMA fanbase, decided they would get into the MMA promotion business, and they held their first event on July 19, 2008, with Affliction: Banned taking place in Anaheim, California. It was an ambitious debut as they went on pay-per-view, which ended up being a good success.

The main event of the show saw Fedor Emelianenko submit Tim Sylvia in just 36 seconds. Also on the show, Andrei Arlovski knocked out Ben Rothwell and Josh Barnett knocked out Pedro Rizzo. It was a memorable event for a lot of reasons, and the UFC went as far as running a show against it. It felt like it was going to be a fun new promotion, which sadly ended up not being the case as they ran just one more event before eventually folding after a planned third event fell apart.