Hello, fight fans and welcome to this week’s edition of the Monday MMA Round-Up. Today, we will be looking back at the conclusion of Fight Island in Abu Dhabi, as well as Bellator’s return. Let’s dive right in with my thoughts on the MMA world this past week.

Looking Back At A Busy Week Of Fights

This is another reason why I love Dan Hardy on the mic. So much passion for fighter welfare. #UFCFightIsland3 – M

Here are the fights I would make following UFC On ESPN 14:

The UFC is back in Las Vegas at the UFC APEX for UFC On ESPN+ 31, which will be headlined by a middleweight bout between Derek Brunson and the undefeated Edmen Shahbazyan. It will only be a three-round main event as the original main event for the show, Holly Holm vs. Irene Aldana, was cancelled after Aldana tested positive for COVID-19. The rest of the main card sees Joanne Calderwood vs. Jennifer Maia, Vicente Luque vs. Randy Brown, Lando Vannata vs. Bobby Green for the second time, and Kevin Holland vs. Trevin Giles. The entire show streams on ESPN+, with the prelims kicking off at 6 PM eastern time, and the main card gets underway at 9 PM eastern time.

On Thursday, Invicta FC holds their second event since returning during the pandemic, with Invicta FC 41 taking place in Kansas City. Janaisa Morandin vs. Montserrat Ruiz is the main event. It airs at 8 PM eastern time on UFC Fight Pass.

ONE Championship returns on Friday with a mixed show, featuring MMA, kickboxing and Muay Thai bouts. Also on Friday is LFA 87 from Sioux Falls, which airs at 9 PM eastern time on UFC Fight Pass. 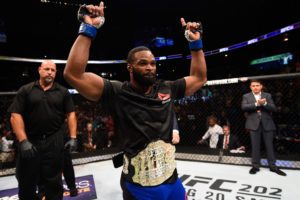 On July 30, 2016, at UFC 201 in Atlanta, Georgia, there was a changing of the guard in the UFC’s welterweight division. Robbie Lawler came into the event as the UFC Welterweight Champion, and was coming off of back-to-back all-time UFC classic fights in title defenses over Rory MacDonald and Carlos Condit. He was defending against an opponent that posed a different threat than those two in Tyron Woodley. Woodley had put together a pair of solid wins and was getting his long-awaited first shot at a UFC title.

While many expected another classic Lawler defense, Woodley had other ideas. The two had trained together a little in the past, and Woodley took advantage of his knowledge of what to do against Lawler. The wars finally caught up to Lawler, and Woodley landed a hard right hand that sent Lawler down, and at the 2:12 mark of the first round, a new UFC Welterweight Champion was crowned as Woodley defeated Lawler. Woodley would go on to hold the title for nearly three years, while making four title defenses, before losing to current champion Kamaru Usman.