I became a wrestling fan in the mid 70s, with AWA Championship Wrestling on Saturdays at 6PM every week. My fandom continued when the WWF took over the territory, like so many other territories. My fandom expanded when I got access to other promotions on TV, then the wrestling magazines and eventually the newsletters.

I’ve been through pig farmers, hockey and baseball players dressed up as wrestlers (or the other way around, I can’t remember), evil clowns, you name it. But I kept watching because I liked what wrestling was and because I knew what it could be.

But I’m done. At least for now.

Maybe in 1999 when my favorite wrestler Owen Hart died due to the negligence and absolute stupidity in not taking the proper precautions for a stunt that had almost no upside I should’ve stopped then. But wrestling was so damned good. 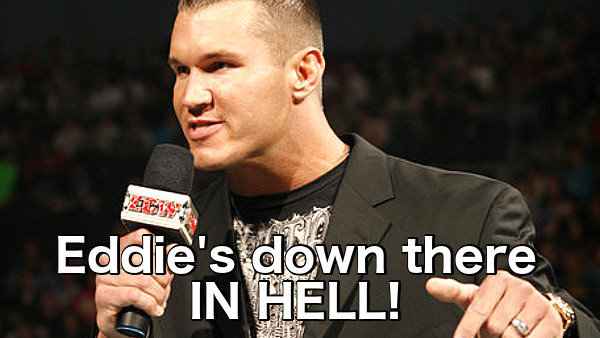 When another favorite died in 2005, it kind of broke my heart. But that wasn’t the company’s fault, right? It was his. It was the effects of the long term damage he’d been doing to his body with drugs and alcohol. Maybe the follow-up where they used his death in a disgusting angle to try and get Randy Orton over as a heel should’ve stopped me, but I was too upset about Eddie Guerrero to even notice. They were the only game in town for the most part at the time and I kept watching.

But I’m done. At least for now.

In 2007, when Chris Benoit killed himself and his family, I couldn’t bear to give the company any more money. For a couple of years, I did not order a PPV. I kept watching the TV shows, though. And I noticed the positive changes that were made in the industry to protect the athletes and eventually I started giving them money again.

When The Network started in 2014, it was a wrestling fan’s dream. All the classic wrestling you could ever want. Current wrestling in the form of a great show like NXT. The PPVs were included in the monthly network price. The great, great network documentaries. And the goofy shows that I don’t watch but I’m sure someone else did. So now I was watching way more product and paying less money.

But at some point, it’s clear they lost their way. They forgot what was at the core of this business; the WRESTLING and the logic that comes with a wrestling match. And there’s also the content; the 9 plus hours of new content they turn out every week that eventually gets repetitive and boring.

In 2016, I took a break from RAW and Smackdown for several months. I told myself that I would start watching when it got better. Well, by all accounts it did. The last episode I missed was the one where Roman Reigns beat up Vince McMahon at the end of the episode. I heard about how great it was and thought they might be on to something.
Eventually it got bad again. And then it got worse. And then AEW came along and reminded me what wrestling could be. Of course New Japan was always there and I watch that as well but I’m talking North American wrestling. And NXT is still good, most of the time.

The pandemic hit and now we have no fans. But I kept watching. The shows were so lifeless at first but they got better. The workers learned how to have good matches with no fans and eventually they added “fans” and there was at least a little bit of atmosphere.

Ratings started to fall. Someone had to take a hit and a couple months ago, Vince removed Paul Heyman from beating the creative head of RAW and put Bruce Pritchard in charge. And it got worse.

At “The Horror Show at Extreme Rules” it started off fine, good even. Kevin Owens and Buddy Murphy had a good pre-show match. Cesaro and Nakamura won the tag titles from The New Day. It was a tables match that would’ve been better as a straight match but what can you do?

Bayley retained her Smackdown women’s title in a match no one thought she would lose against Nikki Cross. It was the right decision as Bayley is part of what feels like the hottest act in the company with Sasha Banks. Seth Rollins and Rey Mysterio had a pretty good match until the end and that’s the moment this show took a sharp turn.
In a way, I was happy that we didn’t get some goofy CGI effect that would’ve shown a man literally plucking another man’s eyeball out of his skull so it didn’t really bother me all that much. But the way the announcers tried to treat it as serious and then Bayley basically made a joke of it backstage sent mixed messages. Are we even supposed to care? 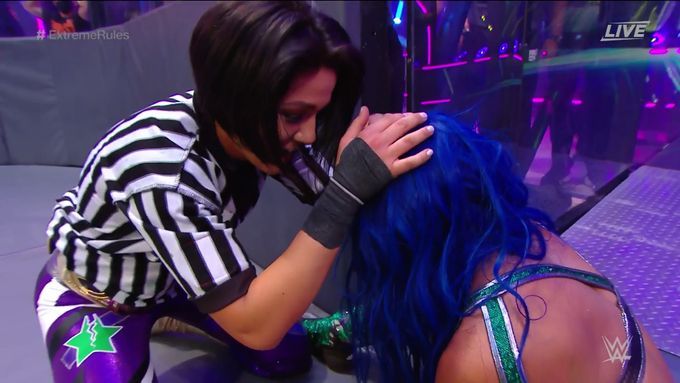 But then, Asuka defended her RAW women’s title in a match that was good. It went long as there were one, maybe two matches, originally scheduled for this show that didn’t happen. And then the nonsense started. Interference, ref bumps, green mist. Nothing I haven’t seen a million times before and I half expected it. But then the ref gets mist blown in his eyes. Bayley proceeds to take the ref’s shirt off, throw him out of the ring and put it on. She makes the 3 count. There’s a pause. Obviously, Bayley’s not a ref and this isn’t official. But Bayley asks the timekeeper to ring the bell. He does. Apparently that act makes it official and Sasha is the new world champion. WHAT?

WWE has spent time on every show this week reminding us that this is the 5th anniversary of the Women’s Evolution. You know, where we were supposed to start taking women’s wrestling seriously. And say what you want about WWE but they proceeded to build the best women’s division in the history of North American wrestling and quite often, the women are having better matches than the men.

I remember a time where the WWF women’s title was defended in an evening gown match where the object of the match was to rip off the other woman’s clothes. That happened all the time, right? Well, the instance I’m referring to is where Debra got her clothes ripped off and Commissioner Shawn Michaels declared her the winner anyway and gave her the title. But the women’s title was a joke at that point so it didn’t matter. But they have been presenting this belt as on par, or maybe just below, the men’s world titles. And they do this?

I kept watching the show out of morbid curiosity. The very next match, Dolph Ziggler was able to name the stipulations for his World title match. He declared it “Extreme Rules for Dolph Ziggler only.” I was wondering why he didn’t just make it a “Dolph Ziggler is the ref” match and ring the bell immediately and declare himself the winner. And the main event Swamp Fight ended. Who won? I watched the whole thing and I don’t know. Certainly WWE didn’t tell me.

But I’m being honest here. I wasn’t expecting much out of the RAW World title match. I knew Drew would retain and Dolph would get beaten like he always does. I was expecting literal smoke and mirrors in the main event and that’s what I got. Would’ve liked a finish but it really doesn’t matter. The whole match was a set for a return of The Fiend and I knew that’s what it was going to be.

But Asuka and Sasha was a matchup of two of the best performers in the company and for a World title and we got Bayley putting on a ref shirt and the title changing hands? For me, that’s too much. So, no more RAW, no more Smackdown. I haven’t decided about PPVs. I will still watch NXT and 205 Live because I love those shows. But as for the main roster?

I’m done. At least for now

Being The Elite Recap: “A Birthday And A Death”

Stardom Wrestling – Eight Reasons Why You Should Give It a Try