Two supercards go head-to-head again this Wednesday when AEW Dynamite and WWE NXT present a second week of loaded shows. Week one was a win for The Great American Bash in total viewers on USA Network, and Fyter Fest on TNT won in some coveted and sought after demos. Both shows can claim victory in certain categories as the weekly ratings battle has grown more interesting than ever. The ultimate winner is the viewing audience, who get another week of supercards.

The main event for The Great American Bash is a title-for-title match pitting the two male singles champions in NXT against each other in a winner-take-all double championship bout. One wrestler would then hold both titles in the aftermath of NXT Champion Adam Cole colliding with NXT North American Champion Keith Lee in a marquee match-up.

The result of the match has gotten out, and spoilers are readily available on the internet. For the sake of this article we will try to ignore those spoilers. What can be said is this match was highly anticipated since being announced for The Great American Bash.

In a different era of NXT, this type of high profile match with a champion vs. champion stipulation would be a TakeOver main event, but WWE is cashing in now for the sake of counter programming. In the not too distant past, putting the match on television essentially for free would be leaving money on the table. Since live gates are null and void during the ongoing pandemic, the need for such an important main event is seemingly far greater now in the battle for TV ratings.

Champion versus champion with the winner then holding dual championships in another era might take months of build-up before paying off such a match, and even in recent times New Japan Pro Wrestling crowned a dual champion after a very long path towards a title-for-title match. Likewise, the quest of Tetsuya Naito in getting to headline the annual Wrestle Kingdom mega show in the Tokyo Dome was years in the making. WWE only took mere weeks to set up and announce the match between Cole and Lee.

Cole’s contract with WWE is also reportedly coming due so that puts his future with the NXT brand in question. WWE cut a large number of talent and staff from their roster after the pandemic forced the cancellation of all live events until further notice. Nevertheless, keeping Cole in their fold would seem like a strong desire for WWE, and giving him a raise could also necessitate moving him to another more prominent brand to get a greater return on their investment. Heading into the TV taping last week, Cole was closing in on nearly 400 days as champion, which is a feat that WWE hyped on social media this week ahead of the match.

Still, Cole might mean far more to WWE by remaining in NXT to help with the ratings fight as NXT can always use star power. Where would Cole fit on another WWE brand? Booking on the main roster lately seems to rely more on the past instead of the future. There are some exceptions, so could Cole be one of the those?

Cole likewise has great leverage in deciding his future as he would be a tremendous acquisition for AEW, or anyone else for that matter. That could mean even more questions for the rest of Undisputed Era in terms of their creative direction moving forward. In storyline, the group shows signs of possibly fracturing, even though Cole’s character remains as cocky as ever in spite of Dexter Lumis terrorizing their stable.

Keith Lee on the other hand has risen in prominence in NXT since capturing the North American Championship, and he climbed the cards to arrive at the most prolific match so far in his WWE career. Lee is a one-of-a-kind talent, and he has only gotten better since arriving in NXT. While he was somewhat stuck on the undercards for quite a while, his series of matches with Dominik Dijakovic broke them both out of the pack and into the spotlight. Since then, Lee’s character development grew from having outstanding matches with Dijakovic to the greater goal of holding a championship.

Having achieved that goal, his character recently set his sights on a more lofty goal of being the first wrestler in NXT to hold the two male singles titles simultaneously as a dual champion. Lee for weeks has teased the idea in confrontations with Cole. That all sets the stage for this Wednesday when the champion-versus-champion winner-take-all match headlines The Great American Bash.

Fyter Fest has a first time match-up that AEW spent far longer building towards than NXT has with its unprecedented main event. Chris Jericho in a grudge match against Orange Cassidy has more backstory than any match from either supercard. Much like with Keith Lee on the NXT brand, Cassidy in AEW finds himself in the most high profile match of his career. 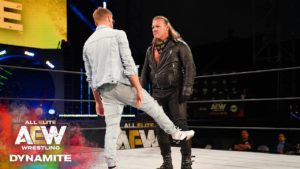 Orange Cassidy is as much of a rising star as he is a polarizing figure among most critics. Jericho has used some of that real criticism to fuel the fictional story of their feud. Though Jericho says he voiced his opposition when AEW initially signed Cassidy, Jericho now looks to help take Cassidy’s newfound stardom to another level in this featured match on a prominent card.

Jericho threatened to beat Orange Cassidy into a bloody pulp. Cassidy has mostly just shrugged it off. The tension escalated when Jericho, with the help of the Inner Circle, literally hit Cassidy with a sack of oranges. The citrus fruit itself did not draw blood, but Jericho eventually did as Cassidy bled during a brawl on Dynamite. Cassidy spilled his own blood, yet he still managed to put Jericho through a table. In an earlier angle, Cassidy also disguised himself as a cameraman for a sneak attack that gained a measure of revenge. There is still vengeance yet to gain at Fyter Fest.

That vengeance has led to some wild brawls on Dynamite, and a brawl last week on The Great American Bash set up a street fight this Wednesday. Mia Yim and her partner Keith Lee were previously in a couple’s feud with the husband and wife duo of Candice LeRae and Johnny Gargano. The program was seemingly winding down when Yim and LeRae got into a brawl on the episode that aired last week. Both were eliminated in a number one contender’s match earlier on the card when tension boiled over in a backstage skit. That led to them being booked in a street fight to settle their grudge. 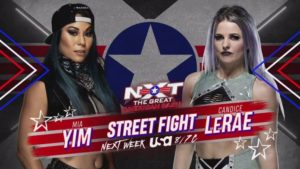 Both have embraced their recent shift in roles. LeRae became a sinister heel, while Yim has shown great fire as a babyface. The street fight stipulation allows the intensity to increase even further. This match could likely include the usual trope of gimmicks in a WWE-style street fight like tables, chairs, and kendo sticks. They also have an entire set at their disposal. Last week that set included sports cars. Vehicles are found on streets, so could those cars also play a part in this street fight at The Great American Bash?

For weeks vehicles have been an element on Dynamite. Instead of coming down the aisle, wrestlers have arrived on scene driving automobiles. Whether it is Trent’s mom dropping off him and Chucky in her minivan, or Cody racing to the arena in his pickup truck, vehicles have become extensions of the characters themselves. That is very true for Dr. Britt Baker and her makeshift vehicle. It was stolen on a recent episode, and another vehicle was also taken.

The Butcher and The Blade commandeered a classic pickup truck driven by FTR. That is the latest development in their feud, and it plays into an eight-man tag team match at Fyter Fest. FTR teams with The Young Bucks against The Butcher, The Blade, and The Lucha Brothers. Previously on Fyter Fest, Rey Fenix and Pentagon Jr. returned to interject themselves into a beef between these teams. Nick and Matt Jakson have also interjected themselves seemingly on behalf of Cash Wheeler and Dax Harwood. A dream match between FTR and The Young Bucks is surely a future direction, so this seems like a way of slowly getting there through an overlapping story. 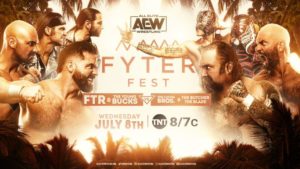 Unlikely partnerships is a theme within another tag match at Fyter Fest. The Dark Order is actively courting new members for their faction, and Brodie Lee has set his sights on recruiting Colt Cabana. In a recent match Cabana already found success teaming with Lee, and Stu Grayson of The Dark Order joins them this week to face SCU in a six-man tag team match. Does Colt have more success while falling further under the cult’s spell, or does Jacksonville become the worst town Colt has ever been in after the match with SCU?

In yet another tag match on the Fyter Fest lineup, the tag team tiles are on the line for the second week in a row. Kenny Omega and Hangman Page defend their AEW Tag Team Championship against a challenge from Private Party. Isiah Kassidy and Marq Quen are in another featured match in AEW. They have an opportunity at again rising to the occasion, and this time matched against the top team in the tag division.

The Great American Bash is not without its share of tag matches announced for Wednesday. Tyler Breeze and Fandango last week made a save for Drake Maverick, who was getting beaten down at the hands of El Legado del Fantasma. That leads to duo of Breezango and Maverick teaming up to face NXT Cruiserweight Champion Santos Escobar and his henchmen — Raul Mendoza and Joaquin Wilde. This will be the first match for the heel trio to team together since the formation of their stable.

Another new team that formed in recent weeks is Joey Janela and Sonny Kiss. The skits with their adventures have been a highlight of Dynamite, and Janela is now set for a singles match in a David versus Goliath battle. His opponent is Lance Archer, who has the diabolical Jake “The Snake” Roberts in his corner. Does Sonny Kiss even the odds by foiling Roberts? Even without the others in the mix, Janela would still be the underdog up against a monster heel.

Also announced for Fyter Fest is Nyla Rose in action. That is the only match hinted from the AEW women’s division for Wednesday’s card. Rose has been working her way back up the rankings looking to regain the title she lost. As her push continues, another women’s wrestler is finally getting her due on NXT.

At The Great American Bash, Mercedes Martinez returns to action in NXT. She now looks to be a force in the women’s division, and it’s about damn time. Her big break is long overdue.

More matches were announced ahead of time for Fyter Fest than The Great American Bash, but NXT will likely have much more in mind to counter program AEW. For example, WWE, mere days before the show, added a match with Johnny Gargano against Isaiah “Swerve” Scott. That grew out of an angle from last week with Gargano’s wife. Scott got involved in trying to break up a brawl, and that led to him having words with Gargano. WWE waited until a few days before the show itself to announce the match via social media, but it is nonetheless now official.

NXT does have momentum in their favor after hotshotting match-ups the last several weeks, but AEW is in for the long haul as they continue to establish their brand of wrestling.

Below are lineups announced for night two of each card on July 8: