There are a few levels to my UFC fandom. My interest piqued slightly when in college, we talked about the UFC in my media class. It was based around how the UFC was marketing the sport and the media coverage that was the result. Was it human cockfighting as the media liked to call it? Was there enough skill level for it to become sport? How regulated did it need to be?

It was easy to be turned off by the UFC during that time frame. But in late 1999, I subscribed to the Wrestling Observer Newsletter. Dave Meltzer covered the UFC like he covered WWF. I started reading about UFC and while I didn’t watch it, mostly because you couldn’t find it, I read up on the fighters and the hurdles the current management was going through to become mainstream.

I remember watching UFC 40 at a friend’s house. Tito Ortiz put a quality beating on Ken Shamrock. But there was also a guy on the undercard who was super interesting. Chuck Liddell beat Babalu Sobral by knockout. 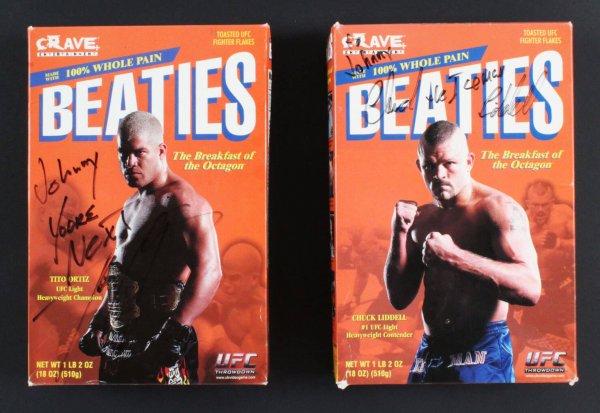 Right around that same time, I was working for an Internet tech company and someone who was close to Chuck and wrestled with him at Cal Poly worked on the sales team. Every once in a while I’d chat with him about something or other related to Chuck. I still wasn’t watching the UFC at this time, so I was going strictly on what I was reading. He had gone to the E3 trade show with Chuck and came back with some promotional memorabilia that I still have somewhere. The photo to the right shows both Chuck and Tito, but I only had Chuck, and it was autographed.

Thanks to all this new knowledge and being able to pick my colleague’s brain about Chuck, I decided to buy UFC 43, which saw Liddell face Randy Couture for the interim UFC light heavyweight championship. At the time, it was supposed to be Tito Ortiz who Chuck was fighting, but Tito didn’t like the terms and probably didn’t really want to fight Chuck at the time, so the UFC made Chuck vs Randy for an interim belt until Ortiz was ready to fight again.

I was fired up. I wasn’t too knowledgeable about MMA as a sport so this was a truly eye opening experience. All I remember is that my wife at the time was going out with some friends, I just had to put my kids asleep, and me and a bottle of wine were going to get educated about big-time MMA.

And then Chuck got worked. I couldn’t believe my eyes. The Ice Man had cometh and been knocked out in the third round. While my guy lost, I wasn’t turned away by MMA at all. But it did take me until two years later to start becoming the fan that I am today.

When The Ultimate Fighter debuted in 2005 after Monday Night Raw, that was really when I decided to go in full bore. The Dana White reality show was a weekly must-watch and because of that show, I decided to go through the UFC DVD backlog at Blockbuster Video. I watched as much as possible as I dove in to learn everything about MMA.

Back to my guy Chuck; after beating Tito Ortiz in a number one contender’s match (after Tito was literally spanked by Randy at UFC 44), he was going to face Randy in a rematch that also coincided with the TV show as both men were coaches.

I don’t think I was able to watch the rematch live, but I was fired up when I saw the result. Chuck was the new champ. And from then on, I never missed another Chuck fight. Fortunately, I caught him right in his prime. From there, he beat Jeremy Horn, Randy again in the rubber match, and the aforementioned Babalu a second time, before facing Tito Ortiz in what was the biggest money fight in UFC history for quite some time.

I had previously never been all that nervous watching MMA before. When I’d watch Mike Tyson fight, and Larry Holmes before him, I’d have butterflies in my stomach. But for this fight, I distinctly remember being so excited that I was also very nervous.

Chuck whipped on Tito again and all was right in the sports world. Little would I know that all wouldn’t be right for Chuck Liddell for almost the rest of his career. While he beat Wanderlei Silva in a dream match at UFC 79, that would be the only fight he’d win again in his career.

Because Chuck’s run on top was short, spanning just over two years, I actually saw more losses than wins. But that doesn’t take anything away from the fact that he was the person who got me into MMA and is still my favorite fighter of all-time.