Recent news of a shakeup in the creative department seemingly means WWE is headed in a somewhat new direction, or maybe veering from its previous course at the least. Bruce Prichard is now the head of creative working under Vince McMahon. With that likely brings some changes, but overall WWE has a sense of sameness for quite some time no matter who has controlled the creative reigns.

WWE, in their official statement, categorized the move as “an effort to streamline our creative writing process for television, we have consolidated both teams from Raw and SmackDown into one group, led by Bruce Prichard. Paul Heyman will concentrate on his role as an in-ring performer.”

Hopefully the consolidation will create more synergy between the two brands as everyone is now basically on the same team. Maybe that even leads to better storytelling between shows, and far less repetitiveness.

How many times does Raw or Smackdown need to begin with an opening monologue? That is usually followed by someone interrupting the talking segment to set up a match later. That plot device has been a driving force on WWE TV shows for twenty years. The segments can be good, but can also often drag on endlessly and get boring. The trope is repetitive.

There are still some cliches WWE has finally gotten away from, namely the heel authority figure. Aside from William Regal in a mostly babyface role on NXT, no other authority figures are regular characters on a show. Drake Maverick did have a recurring role as the storyline head of 205 Live, but that show is watched by so few compared to the main roster. 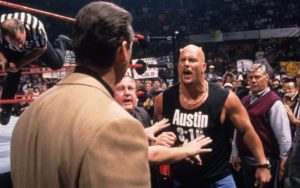 Practically no one misses the heel authority figure. The role had been done to death since Mr. McMahon brought the role to prominence in the late 1990s. The change of not using those kinds of authoritarian characters was welcome, and WWE could still stand for more change.

WWE is an industry leader when it comes to producing television. As slickly produced as WWE programming is, one common criticism is the shows are too overproduced. With that comes complaints of the show being too scripted, but WWE is — especially in this pandemic era — more of a TV show than it ever was before. Television is typically scripted. It is just the nature of the beast.

WWE, in their defense, also has a lot of programming to produce every week, and that is a challenge to script so many first-run shows every week. Maybe having one team can help with continuity between the shows. However, will the booking philosophy itself change at all?

The first Raw in the new era of the creative team looked more to the past instead of the future to hotshot the program. Ratings this week for Raw were up, so maybe hot-shotting worked, but what about the long term?

One positive with WWE programming is the women’s division. The company made tremendous strides in the way it presents its women wrestlers. Women went from divas to full-fledged superstars and the change was more than welcome. Women’s matches are now often in main events on special events and television shows.

The next Stone Cold or The Rock could just as well be a woman instead of a man, especially with strong female leads emerging in movies and television dramas. Total Divas attracted a female audience, but how many of those viewers were converted into actual WWE fans? The answer is probably not that many, but how many female viewers could WWE attract with storylines they can relate to rather than something written from a male perspective?

Women are not the only ones that could benefit from a greater voice in the creative process. Recent civil unrest and upheaval in the United States has forced the country to confront underlying problems it has long ignored. Many of those problems are reflected in the country’s entertainment.

People of color deserve equality, and that includes on the WWE creative team. WWE is inclusive, but they can lead by example by doing far more. Having more people of color on the creative team can offer a perspective that is often ignored or neglected. WWE, like other pro wrestling promotions and many other forms of entertainment, has a long history of stereotypical characters with racial overtones. WWE has thankfully evolved beyond that for the most part, but there could be even more positive changes. That can help the bottom line just as much as the company’s public image.