A pay-per-view theme from the 1990s returns with a rebranded “In Your House” this Sunday on WWE Network. NXT presents its latest TakeOver supercard, and the brand has adopted the In Your House theme since viewers are all mostly still stuck in our houses.

It is a cute idea for a play on words, but they aren’t giving away a house this time around. Nor are they having an Arkansas Hog Pen Match, or a Kiss My Foot Match. They are, however, instead bringing back another blast for the past — the Backlot Brawl.

Velveteen Dream Vs Adam Cole in a Backlot Brawl for the NXT Championship
Not many modern feuds on WWE television last for as long as this one with so few matches between them. That probably has more to do with the extenuating circumstances of the times than them wanting a long and drawn out storyline. Regardless, this seems headed for a possible blow-off.

The added stipulation making the match a “Backlot Brawl” would seem to indicate this is another cinematic bout as the main event of a WWE show. Although the main roster had several cinematic matches so far since the pandemic, not so much with NXT except for the blow-off of Johnny Gargano vs. Tommaso Ciampa. However, that was more of an empty arena match shot cinematically, as opposed to it taking place in a much different setting like the Boneyard Match, or even the Money In the Bank fiasco.

The Backlot Brawl name implies this will be outside of an arena setting. Cole and Dream have quite a high bar to live up to with the Hollywood Backlot Brawl from WrestleMania in 1996. In that match, Goldust and “Rowdy” Roddy Piper told a helluva story. The more recent cinematic matches have proven WWE is much better at doing these types of television spectacles since their production value is so much higher nowadays. So it should be entertaining if nothing else.

Of course Cole’s stablemates from Undisputed Era are likely to play a factor in the match. Does Kyle O’Reilly get involved? He has made a few cameo appearances the last few Wednesdays on NXT after being off television for quite some time due to the pandemic. We miss you, Kyle. Please come back soon if you can.

Dexter Lumis has been stalking the Undisputed Era in storyline, so he could possibly have a role in this match. He seemingly has nothing else to do on the card, but he has been getting plenty of TV time. Some might argue too much time. Not sure where they are going with the Lumis character, and even less sure whether he is a heel or a babyface. Maybe it is one of those shades of gray type things, but that only really works for dynamic characters. Lumis isn’t much of a dynamic character.

If Cole is dropping the title to Dream then Lumis could be an excuse for Cole to save face. Lumis costing Cole the title could also be a catalyst to turning Undisputed Era into babyfaces. There has been chatter recently about Cole’s contract with WWE coming due soon. That could play a part in the outcome of this Backlot Brawl. Does Cole get brought up to the main roster soon? Where does that leave the rest of his stable? Is Dream ready to be the top guy in NXT? What the heck is the deal with Dexter Lumis? No matter if there is a clean finish or not, the outcome of the main event could raise more questions than it answers.

Charlotte Flair Vs Rhea Ripley vs. Io Shirai in a triple threat match for the NXT Women’s Championship 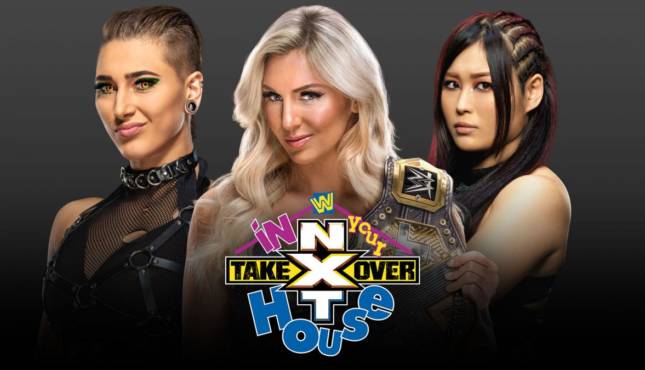 Arguably the most overused gimmick match in pro wrestling is the triple threat match. Even on NXT, there was a triple threat this past Wednesday that involved tag teams. Three-way matchups just don’t mean what they used to in terms of being a special attraction since ECW popularized them over twenty years ago. Nonetheless, no doubt the three women involved in the triple threat this Sunday can have a great match. Io Shirai is one of the best wrestlers on any brand’s roster in WWE. But why is she in this match? Her and Charlotte already had a singles match, but that had a cheap DQ finish that was more of a backdrop for the return of Rhea Ripley.

Shirai is more than deserving of a title match (and even a title run), but is she in this match just to drop a fall? Pinning Shirai could keep Flair from having to drop a fall in losing the title to Ripley. Conversely, Shirai could drop the fall instead of Ripley if Flair is retaining the title. Ripley definitely should not lose yet again to Flair after dropping the title to her at WrestleMania, but Ripley also should probably beat Flair for the title to avenge that loss. So having Shirai could be the out for them where she can drop the fall, and Ripley-Flair in a singles match can be done later. What a travesty it would be for Shirai, though. Shirai could always have been winning the title on Sunday, but her chase would be rather lackluster. Shirai deserves far more than lackluster. Hopefully she can steal the show as she has done in the past.

Flair as NXT champion might have helped her character look strong, but it has made little difference in the Wednesday ratings. If that experiment is running its course, Ripley should be the one to take the title from Flair when she drops it.

Tommaso Ciampa Vs Karrion Kross (with Scarlett)
No way Kross should lose this early in his run, but Ciampa is a top guy in NXT who rarely loses. Giving Kross a win over Ciampa would certainly be a boost for his character. Ciampa is seemingly somewhat of a sacrificial lamb… if that lamb also had a lot of moxy.

Ciampa has lost some steam since he and Gargano blew off their feud. Ciampa needs a memorable performance to get the focus back on him. Unfortunately for the Ciampa character, Kross will likely get most of the spotlight. Kross hasn’t done a long match on a WWE telecast yet, so this is a milestone for him. He has a great dance partner in Ciampa, and it could be a slobberknocker.

Finn Balor Vs Damian Priest
Balor was headed for a match with WALTER until the pandemic made that impossible for a while. That feud is on the back burner while Balor is mixed up with Priest in some sort of Tonya Harding angle.

Priest attacked Balor backstage during an episode of NXT, but the assailant was unknown for several weeks. Meanwhile, Priest has been using an expandable baton as a weapon. He would later admit to being the mystery attacker, and he even hit Balor with the baton when interfering in one of Balor’s recent matches. The baton is the one aspect of the story they should drop for the time being. In light of recent events, using the baton in this match would be incredibly tone deaf. Batons are being used by police during the ongoing civic unrest in the United States, and WWE can hardly utter the word “pandemic” on the air. So they should probably give the baton a rest if they want to ignore events in the outside world as they usually do. Using that prop in this grudge match would only be a reminder to viewers of police brutality. Not a good look for them if they use the baton gimmick. 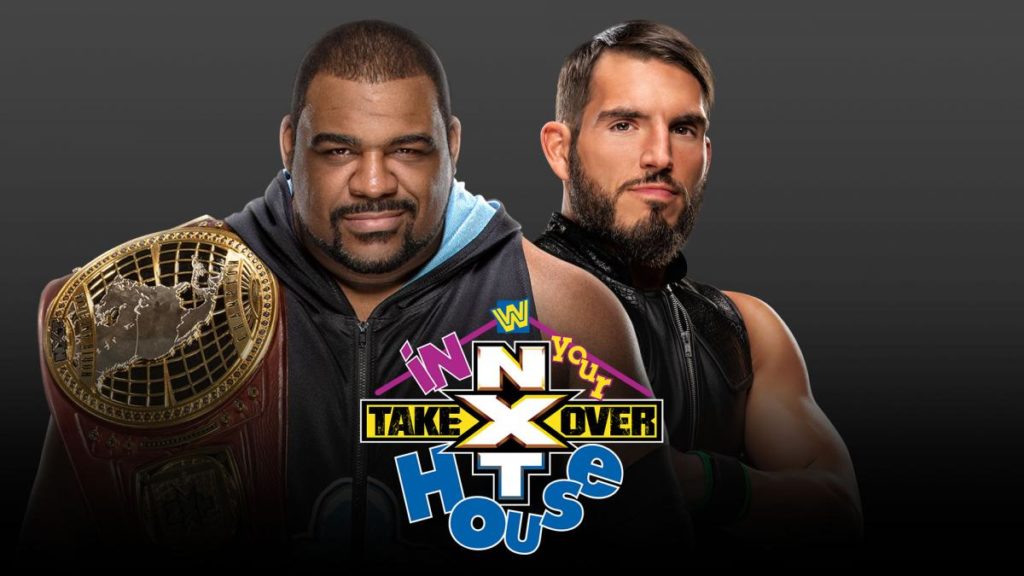 The story of this feud is more conducive to a mixed tag, but they already did that as an impromptu match this past Wednesday on NXT. The finish of that just built more heat for this title on Sunday.

The creative team chose to book this title match for TakeOver, and not save the mixed tag for such an occasion. There has to be a reason for that. They could have wanted the mixed tag for TV ratings, but they didn’t advertise it ahead of time. Instead it was made a tag match in an angle that just needed Teddy Long announcing the stip for it to be cliche. So why are they doing the singles title match on TakeOver instead of the mixed tag that was seemingly the direction in the storyline? One possibility is a title change, and they might want that on a TakeOver card.

Mia Yim, Tegan Nox & Shotzi Blackheart Vs Candice LeRae, Dakota Kai & Raquel Gonzalez
LeRae and Yim were involved in the couples feud that also involved Gargano and Lee. Somehow the women ended up in this six-woman tag match, which was set up during a big brawl on NXT television. Yim and LeRae have had simmering issues over the last several weeks. They probably should be the focal point.

Nox and Blackheart also have their issues with Kai and Gonzalez. With everyone involved the match has a chance to get really good, and a six-person match can be very action packed if allowed to be.

Overall the card looks like it can deliver some great matches. Some could fall short if hampered by booking ideas. This is really the first TakeOver supercard since the start of the pandemic, and it is about time the NXT roster was able to put on the type of show that earned the brand such a stellar reputation. The last TakeOver card was rebooted amidst the pandemic, and it was shown over a few weeks in the usual Wednesday time slot on NXT television. This time around TakeOver is back to being a special event on the WWE Network. That at least feels like things are getting back to normal.

Being The Elite Recap: “A Birthday And A Death”

Stardom Wrestling – Eight Reasons Why You Should Give It a Try