The passing of pro wrestling legend Mr. Wrestling #2 aka Johnny Walker brought back memories of not only his great career, but also of how he inspired one of my favorite characters that I created and booked — Mr. Wrestling #4.

In 2007, one of my long-time friends JJ Perez suffered a serious neck injury that forced him to retire from pro wrestling. Like all pro wrestlers, the pull of the ring was too much. Though most won’t know the name JJ Perez, he was one of the best wrestlers I have ever seen inside the squared circle. JJ was like Ricky Morton, a small babyface who was easy to root for. He came along when his size was a disadvantage, but in the Northern California independent scene he would be considered one of the very best ever. I watched a lot of pro wrestling with JJ, and my knowledge of in ring psychology is mostly from him. JJ was also a head trainer at APW from 2008 to 2009, then he would come in for special training as his career outside of wrestling took him away from his coaching responsibilities.

In early 2008, JJ, current NXT referee Thomas Castor, and myself were doing what we would do multiple times a week, watch wrestling footage and study. JJ was talking about how he was feeling good and wanting to get back into the ring. He went to the doctor, got another MRI and the doctor cleared him for wrestling. JJ had a potential booking, but was nervous to come back as JJ Perez because of his ring rust and his body wasn’t where he wanted it to be. The booking was a lucha show, so I suggested to JJ to wear a mask to get the ring rust off. JJ, by chance, had a camouflage mask.

We started to brainstorm names. I suggested “El Militia”, but we just laughed at that one. “Mr. Militia” was used in 2009 by Dave Dutra when the Oakland festival wanted lucha libre wrestlers, so I had Dutra wear the extra mask JJ had. JJ was a great wrestler, but his knowledge of pro wrestling history didn’t go past WWF in mid-80s. I talked to him about Mr. Wrestling #1 and Mr. Wrestling #2. I told JJ that it was one of my favorite masked characters, because it was so simple. Plus, both Mr. Wrestling #1 and #2 were fantastic wrestlers and JJ was one of the best I had ever seen. The Mr. Wrestling gimmick would be a perfect for this one-off show. I told JJ that when I was a kid, I would fantasize about different wrestler personas that I would book. One was Mr. Wrestling #4, because not only I loved the gimmick and the mask, but it was an excuse to throw up the four fingers like The Four Horsemen. I know it’s silly, but JJ loved the name Mr. Wrestling #4 and that was the persona he would take for this one-off lucha show. 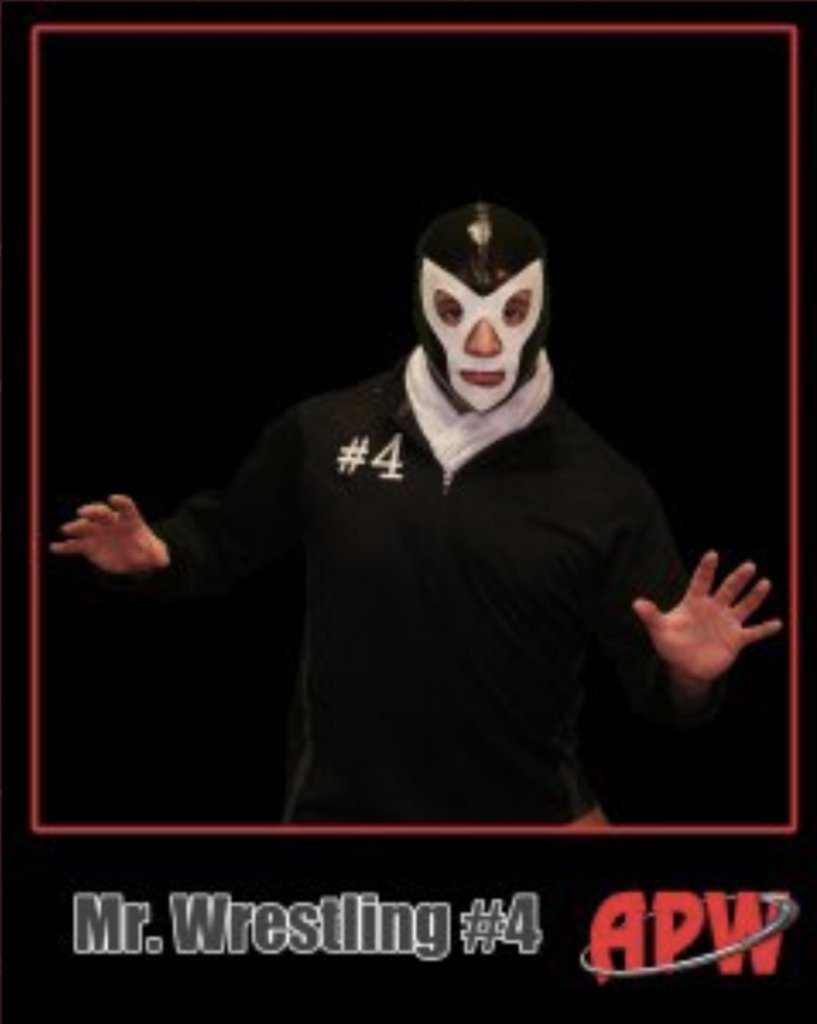 At the same time in 2008, I started booking All Pro Wrestling and I was happy to have JJ Perez on my cards. I created JJ Perez as the APW Commissioner and he also wrestled as Mr. Wrestling #4 in the mask. JJ wasn’t thrilled at doing two characters because well, that was more work for him to do on a show, but it actually worked out well for what I wanted accomplished. JJ was great at both roles. JJ as Mr. Wrestling #4 was my ring general. Since APW was a place for the APW graduates to work once they were ready to make their pro wrestling debut, I usually had them work with Mr. Wrestling #4 first.

Two of our very best APW graduates Dave Dutra and Matt Carlos made their debuts the same time I started booking APW. They had so much potential, so I made sure they worked with JJ Perez to speed up their learning curve inside the ring. I liked to book things a little out of the norm. Title changes usually go babyface to heel to babyface and so on, but with the APW Worldwide Internet Championship I went babyface to babyface to babyface. I liked to keep the fans on their toes and to know that anyone could beat anyone at any time. Dave Dutra was the reigning APW Worldwide Internet Champion and lost to the gold to Mr. Wrestling #4 who later in the year lost it to Matt Carlos.

Mr. Wrestling #2 never saw Mr. Wrestling #4 work, but if he did, I know he would have respected the JJ Perez version. JJ was a throwback to the days of the great pro wrestling of the 70s and 80s. JJ wanted to show respect to Mr. Wrestling #2 in and out of the ring, never disrespecting the mask and the legacy that came before him.