Welcome to our weekly edition of the Monday MMA Round-Up. There was several big news items this week, and the UFC ran at the UFC APEX in Las Vegas for the third straight week with UFC On ESPN 10. Let’s dive into what happened over the past week.

Looking Back At UFC On ESPN 10

I already explained why I signed a new deal. It’s either take it or leave it and not get paid. I would’ve signed another deal if it was done in good faith. He called me night before he wants to announce and tell me take or it leave it. That’s not negotiating that’s strong arming

Fights To Make After UFC On ESPN 10

The UFC is back for the fourth straight week at the UFC APEX in Las Vegas with UFC On ESPN 11 on Saturday. It is headlined by a pivotal heavyweight bout as Curtis Blaydes puts his three-fight win streak on the line against Alexander Volkov. Blaydes has claimed that should he win, he will be sitting out until he gets a title shot. Of course, Francis Ngannou is ahead of him, so that could be a long wait.

There is a strong co-main event which sees Josh Emmett take on Shane Burgos, which has the potential to be an absolute barnburner. Also on the main card is Raquel Pennington vs. Marion Reneau, Belal Muhammad vs. Lyman Good, and Jim Miller vs. Roosevelt Roberts. This is a deep show with some solid prelim fights, including Clay Guida vs. Bobby Green, Tecia Torres vs. Brianna Van Buren, and Roxanne Modafferi vs. Lauren Murphy.

Keep an eye on Max Rohskopf, who is making his UFC debut on the show against Austin Hubbard in the opening fight on the prelims. He is 5-0 in his young career, but has been regarded as the top overall prospect in the sport. 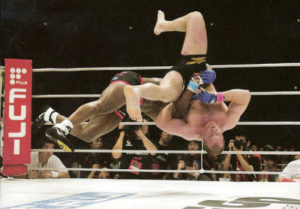 On June 20, 2004, Pride Fighting Championships held a notable event, Pride FC: Critical Countdown 2004. It featured the second round of the Pride 2004 Heavyweight Grand Prix, and featured some of the biggest names in Pride FC history on the card.

The main event was a tournament fight between Fedor Emelianenko and Kevin Randleman, which became a famous fight due to the moment where Randleman performed a suplex slam on Emelianenko and dropped him right on his head. The moment has been played in highlight reels for both men over the years. Despite that, Emelianenko would go on to submit Randleman in just 93 seconds.

Other notable fights on the show saw Antonio Rodrigo Nogueira beat Heath Herring and Sergei Kharitonov defeat Semmy Schilt. There was another famous moment in Pride history that occurred on the show, which was Quinton Jackson knocking out Ricardo Arona with a vicious power bomb slam. That also has been played in highlight reels over the years.