Hello, everyone, and welcome to this week’s edition of the Monday MMA Round-Up. It is UFC 250 fight week in Las Vegas, kicking off UFC events on every Saturday during the month of June. We look back at the UFC’s first event at the UFC APEX, and there has been no shortage of news this week, so let’s dive right in.

Looking Back At UFC On ESPN 9 & This Week’s News

As mentioned above, it is UFC 250 fight week. UFC Women’s Featherweight Champion Amanda Nunes defends against Felicia Spencer in the main event. Also on the main card is Raphael Assuncao vs. Cody Garbrandt, Aljamain Sterling vs. Cory Sandhagen, Neil Magny vs. Anthony Rocco Martin, and Eddie Wineland vs. Sean O’Malley. It airs on ESPN+ PPV at 10 PM ET, 7 PM PT. The prelims, which will air completely on ESPN, begin at 6 PM ET, 3 PM PT, and are headlined by Alex Caceres vs. Chase Hooper. Among the prelims are Ian Heinisch vs. Gerald Meerschaert, Cody Stamann vs. Brian Kelleher, and Jussier Formiga vs. Alex Perez.

Outside of that, it is a quiet weekend for the sport. 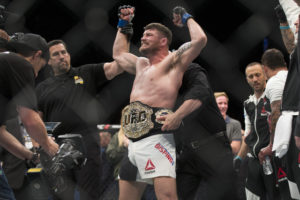 On June 4, 2016, we saw one of the greatest fighters to never hold a UFC championship finally get UFC gold strapped around his waist when Michael Bisping scored a shocking first-round knockout win over Luke Rockhold to become the UFC Middleweight Champion in the main event of UFC 199. Bisping famously took the fight on two weeks’ notice, and Rockhold already held a dominant win over him in the past. It seemed like Rockhold didn’t take the fight seriously, and Bisping made him pay by rocking him several times before finishing him off in 3:36. It was the crowning achievement of Bisping’s Hall Of Fame career.

That win capped off one of the best UFC events in history. Also on the show was Dominick Cruz successfully defending the UFC Bantamweight Championship against Urijah Faber in their trilogy bout, a featherweight war between Max Holloway and Ricardo Lamas that is famous for Holloway yelling at Lamas to bang in the last seconds of the fight, and Dan Henderson’s turn-back-the-clock comeback knockout of Hector Lombard.

The show started off with a wild and memorable brawl between Polo Reyes and Maestro Dong Hyun Kim, and also had signature wins by Dustin Poirier, Brian Ortega and Jessica Andrade.