Hello, fight fans, and welcome to this week’s edition of the Monday MMA Round-Up. The UFC has wrapped up their five events in five weeks stretch at the UFC APEX in Las Vegas, capped off with one of the best fights of the year. It is time for a week off, but there is still plenty going on in the sport, so let’s look back at the week that was.

Looking Back At UFC On ESPN 12 & Other News

Matchmaking After UFC On ESPN 12

Here are the fights I would like to see following this past weekend’s UFC On ESPN 12 event:

The UFC has a week off for the July 4th holiday before heading to Abu Dhabi for four events on Fight Island. 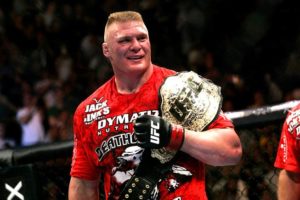 Carwin got off to a hot start in the first round, pounding away on Lesnar and nearly finishing him a couple of times. Lesnar was able to weather the storm and survive the first. The second round was a whole other story as Carwin was gassed after the first. Lesnar took him down in the second before securing an arm-triangle choke to score the win and become the undisputed champion.

The co-main event was one of the best fights of 2010 as Chris Leben and Yoshihiro Akiyama had a war that was won by Leben in the third round. Also on the card, Chris Lytle beat Matt Brown, Stephan Bonnar defeated Krzysztof Soszynski, and George Sotiropoulos scored a win over Kurt Pellegrino.

The show did 1,160,000 buys on pay-per-view, one of the highest in UFC history. The event won Best Major Show in the 2010 Wrestling Observer Newsletter Awards, the only UFC event to ever win that award. Also in the WON Awards, Leben vs. Akiyama finished third and Lesnar vs. Carwin finished fourth in Fight Of The Year.