After Hana’s birth, Kyoko Kimura separated from her husband in Indonesia and moved back to Japan with baby Hana in tow.

As we discussed in part one of our series, life as a single mother isn’t easy, especially in Japan, though Kyoko never let this crush her dream of becoming a pro wrester.

Barely into her 20s, Kyoko started training again, this time at the JWP dojo in Tokyo. As a single mother, she regularly brought baby Hana to the dojo on her bicycle, where Hana would then sit and watch for most of her early life.

In 2003, ten years after her false start in FMW, Kyoko Kimura would graduate from the JWP dojo. In Japan, it’s common for graduates to take part in something called the “100 Bump Challenge” when they finish their training. The idea is to take every kind of basic bump possible (bodyslams, snap mares, shoulder-blocks, etc.) at least a hundred times.

When five-year-old Hana Kimura saw this happening to her mother, she stormed the ring and shielded Kyoko screaming, “Stop hurting her!”

At age 25, Kyoko Kimura finally made her pro debut for JWP on July 20, 2003, losing to Erika Watanabe in her first bout.

In the first part of our series, we learned about Kyoko’s love of the Sheik, the person who most inspired her to wrestle. His last active years in the business were with FMW, where Kyoko trained in 1993, undoubtedly a factor in her decision to join FMW in the first place.

Kyoko was still a rookie student when the Sheik’s nephew, Sabu, debuted for the company, which by that time had caught fire nationally, and had quickly become a top promotion in Japan.

Sabu was over like crazy in FMW, where he was known to launch himself through tables decades before it transformed into a run-of-the-mill pro wrestling spot. In the ring, Sabu was special, and crowds in Japan understood what they were seeing was one of a kind, and his time in FMW is what first cemented his name into the Japanese wrestling industry. For good.

Rookies in Japanese dojo systems are often required to take care of wrestlers outside of the ring. Taking care of dirty laundry, shopping and preparing daily meals, cleaning the dojo. This is all commonplace stuff, and not just in pro wrestling, but within other Japanese dojo systems, like sumo.

When Kyoko was still an FMW rookie in 1993, she was responsible for Sabu and some others during the tour. Once, when Kyoko brought Sabu along while they went grocery shopping, Sabu paid for all of the groceries at the register while Kyoko wasn’t looking.

Kyoko was unbelievably grateful for this, and would never forget his kindness.

In 2005, Sabu contracted a mysterious virus that left him temporarily paralyzed and kept him out of the ring for ten months, so friends and fans of his from around the world pitched in and held benefit shows to help him pay for his medical bills.

In Japan, (current ROH star) Sumie Sakai organized WE LOVE SABU, a benefit event in April 2005. It was a small card of mostly ex-FMW wrestlers, ones Sabu worked with early on his career. It was held at Differ Ariake in Tokyo.

Kyoko reached out to Sakai and insisted she be involved with the show. She ended up wrestling Emi Sakura in the first match of night 2.

Wrestling on the show was important to Kyoko, but even more important than that was that she would get the chance to thank him in person for buying her groceries years earlier. She’d never forget. At the show, Sabu remembered the story and deeply appreciated Kyoko’s thankfulness.

Stepping into the “Dark Ages”

The industry had changed quite drastically by the time Kyoko returned to Japan. Unfortunately, pro wrestling just wasn’t as popular as it was back in 1993, when she first trained with FMW before having to retire from knee injuries.

MMA had skyrocketed in popularity by the early ‘00s. Reality was “in,” and by the turn of the century, most mainstream fans favored a realistic, sports-like product. Companies like K-1 and PRIDE provided this in spades and essentially cornered the sports-entertainment market in Japan, while many traditional pro wrestling companies would transition into what journalist, author and historian Fumi Saito calls “the Dark Ages” of wrestling in Japan.

Traditional pro wrestling survived the so-called “Dark Ages,” though many groups suffered early in the decade. NJPW and AJPW, the “Big Two” in Japan for decades, were struggling to fill mid-sized venues. FMW, where Kyoko first trained in 1993, was out of business by early 2002. 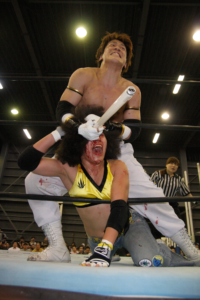 Even AJW, the biggest women’s wrestling company in the world and, at the time, the longest-running promotion in the world, male or female, finally folded in 2005.

Between the smaller gates and no consistent cash-flow, smaller independent groups faded into obscurity. Pro wrestling lost a lot of its momentum in the eyes of most fans.

Women’s wrestling in the early ‘00s suffered the same issues, just in a more bitter fashion. While AJW and joshi wrestling enjoyed massive boom periods in the ‘80s and ’90s, the Dark Ages were a struggle for all, especially for joshi groups, which has always been overshadowed by the general mass appeal had by men’s wrestling.

By 2005, Kyoko began freelancing more, often for companies like JWP, Oz Academy, WAVE, Sendai Girls, and other independents, or even non-joshi groups.

Between 2006–08, Kyoko took part in bloody deathmatches in BJW and other indies around Japan. Her goal, according to Fumi Saito, was that she wanted to do every style of pro wrestling: hardcore, comedy, deathmatch, “shoot” style, everything. She also wanted to be heel just much as she wanted to be babyface.

But why all the trouble in such a dark period for puroresu? The answer is simple and stark. Kyoko Kimura’s passion for pro wrestling is as immense as it is inevitable.

After a few more years of freelancing around the Tokyo scene, Kyoko had established a name on the scene in Japan. In 2010, Super Delfin offered to bring her down to work for his upstart Japanese lucha libre group, Okinawa Pro Wrestling. Delfin’s only condition: Kyoko would have to move to Okinawa. Without hesitation, she took the offer.

Hana, who was in 8th grade at the time, actually wanted to move with her mother to Okinawa, which made the decision all the easier for Kyoko.

While in Okinawa, Kyoko wrestled constantly as Hana attended junior high school. The two spent their free time on the island biking, camping, and swimming as much as they could. They enjoyed the free-spirited island lifestyle, together.

Hana also joined a pop idol group and hip hop dance troupe in Okinawa. Hip hop dance, which had was experiencing a surge in popularity among teenage girls in Japan at the time, was something Hana was very passionate about. She loved it, but she knew it wasn’t her destiny; Hana even went on record earlier this year saying that she knew dancing wouldn’t pay her bills.

The Move to MMA: Kyoko debuts for Pancrase 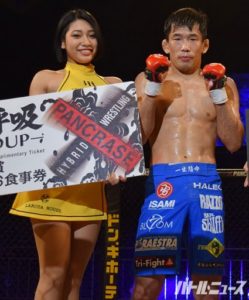 In around 2011 and into 2012, Okinawa Pro eventually closed down for good. Kyoko and Hana decided to stay a little bit longer in Okinawa after this. While Hana finished junior high, Kyoko would move on and begin to train for MMA.

In November 2011, Kyoko had her first MMA bout in Pancrase, a TKO win over established judoka and female MMA pioneer Megumi Yabushita after doctor stoppage.

Hana would work at least one show as ring girl for Pancrase during this time.

Kyoko’s final three fights with Pancrase consisted of one more win and a draw and a loss to ex-UFC fighter Rin Nakai, leaving her with an MMA record that of today stands at 2-1-1.

By the time Kyoko had wrapped up her short stint as MMA fighter and Okinawa Pro had fully closed down, she was again wrestling regularly on the Tokyo independent scene.

Kyoko and Hana had actually moved back to Tokyo a little bit after Kyoko’s first fight. Hana would finish her primary school studies at an international high school in Tokyo before graduating. It was on one afternoon around this time when Kyoko took Hana out for lunch in Harajuku and asked her about becoming a wrestler. Hana explained that sooner or later, she knew that is what she was. Becoming a wrestling was her destiny, something she knew she was unable to control.

“I don’t like or dislike wrestling, it’s just a part of me.”

In part three, we will take a look at…
• Hana’s childhood in the business
• Training at Wrestle-1
• Kyoko’s retirement
• Hana’s rise to international popularity