This Wednesday both NXT and AEW present the first night of two supercards going head-to-head on basic cable television. AEW some time back announced Fyter Fest would air on TNT this year as two episodes of Dynamite. NXT seemingly in a bid to counter program them is bringing back The Great American Bash for the next two weeks on USA Network.

The legend goes that Dusty Rhodes came up with The Great American Bash as the name for a closed circuit supercard in 1985. The next year the name became a touring series promoted by Jim Crockett Promotions that ran for a few summers in the mid-1980s. After Turner bought the promotion to form WCW, the name of the summer tour became a singular pay-per-view on the calendar year. WCW ran Great American Bash PPVs from 1989 through 2000. 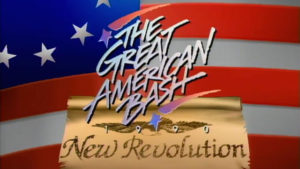 WWE would eventually absorb WCW’s intellectual property, and Great American Bash returned in 2004 under the banner of a SmackDown branded pay-per-view. By 2008 WWE had done away with singular branded PPVs, and for the next two years Great American Bash was a multi-branded event. In 2009, the name was shortened to simply The Bash. WWE would then shelve the name except for one rare occasion in 2012 for a one-off moniker on an episode of SuperSmackDown Live.

An irony in the history of the name that surely is not just a coincidence with Dusty coining the term, is that now the name returns in 2020 as competition against a show produced in part by Dusty’s son — Cody.

Cody and company present their second year of Fyter Fest. This time the event is in two installments. The name itself is a spoof on the infamous Fyre Festival debacle that was a major news story at the time. Last year AEW’s Fyter Fest was co-promoted alongside the CEO gaming event, and this year the show was set for an international audience as AEW was scheduled to run in London. The ongoing pandemic shut down any plans of an international show, and now the show is set for two nights of television.

Both shows feature marquee match-ups and first-run matches that are PPV caliber bouts. Both companies have announced as of this writing at least five matches for the first night of their respective shows. AEW has three title matches set for night one of Fyter Fest, and NXT has a dream match in the main event of their first installment of The Great American Bash.

A superstar from the main roster meets the top women’s star in NXT when Sasha Banks faces NXT Women’s Champion Io Shirai in a non-title match. Announced this past weekend on social media, the match is a late addition to the show.

While the manner in which the match was announced was somewhat last minute, seeds for such a match were planted a few weeks ago. Sasha Banks previously returned to NXT television alongside her friend and tag partner Bayley to defend their WWE Women’s Tag Team Championship. After Banks & Bayely won the match, Io Shirai ran in to attack them both in an angle that closed the show. So Banks against Shirai makes sense even if its announcement seemed somewhat haphazard.

Mere weeks after her most high profile win in NXT when she won the women’s title, Shirai now is set for probably the most prolific singles match of her WWE run — and her opponent could not hardly be any better. This could easily be the match of the night.

Sasha Banks has often proclaimed her love for Japanese women’s wrestling, and Banks has used that influence as inspiration in building a resume of outstanding matches in WWE. Now Banks is set to face one of best wrestlers to come out of the joshi scene. Then, some time later Banks faces another joshi standout when she challenges WWE Raw Women’s Champion Asuka in the coming weeks at Extreme Rules.

Banks herself has been on quite a run while teaming with Bayley. The heel duo is often a highlight of SmackDown, and they have recently been featured on Raw since winning the tag titles. Look for Bayley to be in Sasha’s corner in the match against Shirai. That could likely play a part in the finish. The match being non-title is also notable. No matter the finish, the match has a chance to be tremendous with two great workers in a dream match.

The next challenger for Shirai’s title will be decided in a fatal four way match with Mia Yim vs. Tegan Nox vs. Candice LeRae vs. Dakota Kai, and the winner becomes the new number one contender. Since the original announcement of the match, an elimination stipulation has been added to the match so this could get plenty of TV time as part of The Bash.

The other top star of the NXT women’s division is embroiled in a comedy feud that has her booked in a mixed handicap match on night. The former NXT Women’s Champion, Rhea Ripley, is now feuding with a male manager that is trying to recruit her to join his stable of wrestlers. Ripley has beat him up on multiple occasions, but he still insists she should join his group known as the Robert Stone Brand. This same dude also vomited in the ring a few weeks ago.

Rhea Ripley needs to kick this guy’s ass and get back to the top of the cards. But first she must face Stone and Aliyah in a handicap match, and if Ripley loses she must join Stone’s stable. This can go really well, or this match can turn ridiculous. Let’s hope Ripley remains a strong character, as she can be a star on any brand in their women’s division. 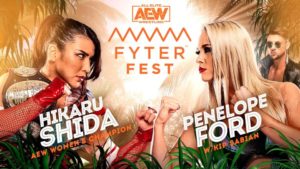 AEW has a title match to showcase their women’s division on the first night of Fyter Fest.

Penelope Ford challenges the Hikaru Shida for the AEW Women’s World Championship in a bout the promotion has spent a few weeks turning into a grudge match. That is only one of three title matches on night one of Fyter Fest. The championship bouts feature some of the promotion’s most over talent.

Cody is in many ways a spiritual figure in AEW, and he is a guiding force in the promotion as an executive. As an on-air in-ring talent, Cody recently became the first TNT Champion after winning a tournament for the belt. He has since been on a run of defending the title in memorable matches every week on television.

Jake Hager attacked Cody after a title defense on a recent episode of Dynamite. That set up a title match between the two for Fyter Fest. Cody has continued to deliver in title matches, and Hager is plenty good so he can only help in delivering a quality match. This could be the sleeper match of the night among either show.

The other title match on the first night of Fyter Fest pits teams against each other that have basically been with AEW since its very early days. This match for the AEW World Tag Team Championship also features the person that was arguably the most over wrestler on the roster before the pandemic shut out fan attendance.

Adam Page with his cowboy persona had become one of the most beloved characters on Dynamite. He missed several weeks of television time since the pandemic, but his character has returned seemingly just as driven as ever…and of course still drinking. Not having a crowd to play off kind of hinders all the cowboy shit, but Page and his tag partner have delivered with strong matches in recent weeks. His championship partner — by the way — happens to be Kenny Omega. He is a pretty damn great wrestler in his own right. 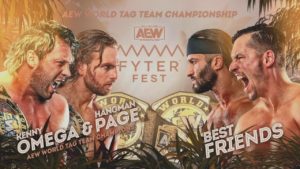 Page and Omega are an odd couple team that has developed an interesting chemistry. Their story has shifted from reluctant partners into a special bond between the characters. At Fyter Fest they defend their tag straps against Best Friends — Trent and Chuck. Safe to say there will be plenty of high spots, and this could develop into one of those fast-paced action-packed tag matches that AEW is known to produce.

Two other tag matches round out the first night of Fyter Fest. Rising star and impeccable heel MJF teams with his heavy — Wardlow — in a match against Jurassic Express partners Luchasaurus and Jungle Boy. Marko Stunt will probably be in tow as well. This match has two of the promotion’s most promising singles wrestlers on opposing sides. MJF could become the kind of heat magnet that “Rowdy” Roddy Piper was decades again. He is a tremendous heel character. On the opposite side is Jungle Boy, who is developing into a heartthrob babyface. He has wowed fans in the ring just as much as he has melted hearts.

The other tag match for night one of Fyter Fest has the Inner Circle’s Santana and Ortiz against Private Party. The match-up has a bruising heel duo matched up with high flyers in what should prove to be a good mix of styles.

Whereas tag team matches round out the Fyter Fest card for Wednesday, singles matches make up the rest of the card for NXT. Of those, one is a gimmick that is a first for NXT. The backstory is Roderick Strong was frightened so much by Dexter Lumis that he ran away in fear during a match on a previous episode. For their rematch at The Great American Bash, the bout between them is now a strap match to ensure Strong cannot flee. 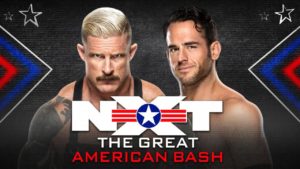 Undisputed Era have kind of largely looked like geeks at times in this storyline with Lumis. Their characterization in this program is much different than them just being chickenshit heels. Part of Lumis’ gimmick is that he no-sells and stalks his prey. Now he is booked in a match where he is literally tied to his opponent. There can be no stalking. Interesting to see what kind of psychology they implement. Strong for the sake of his character is due to look strong, but the story so far has him showing plenty of weakness. He may need to get his heat back.

One late addition to night one of The Great American Bash is anything but weak, and the match could prove to be a slobberknocker. Timothy Thatcher faces Oney Lorcan in a match that was set up over social media this past weekend. Though booked in the digital age it is a timeless wrestling story where one wrestler simply challenged another, but in this day and age it is in 140 characters or less. These two do not need a complex story, their complexity in the ring can tell a much better story than any script writer can imagine.

The lineups from both Fyter Fest and The Great American Bash are equally equipped with what can potentially be great matches. This is likely the best head-to-head battle between the two promotions at least since the onset of the pandemic. The overall winners are the viewers, as we get pay-per-view quality shows on basic cable or satellite for no additional charge. It has been a rough year in the real world, we can all use a win here. We are getting just that.

The full lineups for night one of each card are below: