It’s a new month and the UFC has a packed schedule for June. They will be running all four Saturdays during the month, with all empty-arena events slated to take place at the UFC APEX in Las Vegas.

EDIT: It looks like the June 27th show could be a Fight Island show according to Dana White.

The four events will consist of a pay-per-view event on June 6, ESPN+ events slated for June 13 and June 20, and an ESPN event slated for June 27. While the June 6 event is the only one that has a full card announced, there are plenty of fights announced for the month, and some good ones at that.

Here are your ten UFC fights to watch in June. 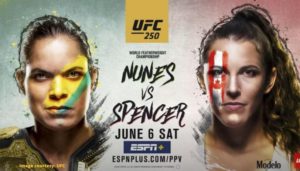 The main event of UFC 250 sees Nunes defending the UFC Women’s Featherweight Championship for the first time against Spencer. Nunes is regarded as the best female fighter in the history of mixed martial arts, but Spencer is going to provide a stiff test for her. Spencer put up a strong showing against Cris Cyborg, who Nunes defeated for the title, and she is a natural featherweight while Nunes has to hold onto extra weight to compete at 145. Nunes is coming off a win over Germaine de Randamie in December that was a hard-fought win. Nunes has more talent but I see Spencer as having a decent chance at pulling an upset. It is definitely a fight that isn’t getting the love it deserves for how competitive it could be.
Raphael Assuncao Vs Cody Garbrandt
This one is interesting because Garbrandt, a former UFC Bantamweight Champion, has his back against the wall coming in with three straight knockout losses. He hasn’t fought in 15 months and has changed main training camps, putting in more work with Mark Henry and his team in New Jersey, though he is still very much a part of the Team Alpha Male camp. Assuncao is also in need of a win as he has suffered two straight setbacks, and another loss could shut him completely out of the title picture. Garbrandt will always get chances because he has star quality, but he needs a win in a big way here, and has to hope his injury issues are behind him. This is an interesting fight and one I don’t think is getting enough attention.
Aljamain Sterling Vs Cory Sandhagen
This seems to be the fight everyone has their eye on for June 6, and for very good reason. This could have been the main event of any other event this month, but was put on the pay-per-view card as many see this at the top contender fight at 135 pounds. Many thought Sterling should’ve been pulled in favor of a title fight since the UFC Bantamweight Championship is now vacant, but contracts for this were already signed. This is such an interesting fight as Sterling is on a roll having won four straight, while Sandhagen has won seven straight, his last five coming since joining the UFC. Both have fun styles, and Sandhagen is an exciting fighter to watch in action, while Sterling is a constant pressure fighter with tons of talent. This fight has the makings of quite the fight and could very well show who is the best fighter at 135 pounds right now with the retirement of Henry Cejudo.
Eddie Wineland Vs Sean O’Malley
The Suga Show is right back in action as O’Malley steps up in competition to take on the veteran Wineland, a former WEC Bantamweight Champion. O’Malley is undefeated in his career but Wineland has 38 career fights to O’Malley’s 11, and Wineland has shown no signs of slowing down. This will be a big test to see how the 25-year-old O’Malley handles the veteran competition, and Wineland is a power puncher unlike anyone O’Malley has fought in his career. This is a perfect fight for O’Malley right now to see how quickly he is progressing, and a good fight for Wineland to show he still has some fight left in him. 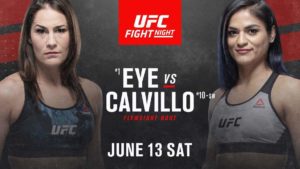 Jessica Eye Vs Cynthia Calvillo
This is the main event of the June 13 card, and it was met with a ton of criticism from fans. It wasn’t that it’s a bad fight, just criticism for being the headliner. What many aren’t realizing is that every fight on the June 13 card was put together on short notice, and there weren’t a lot of options for a main event. Nevertheless, it’s a solid fight for the women’s flyweight division. Calvillo is moving up to 125 pounds for the first time, and what better way to make a statement than to defeat a former title challenger. Eye bounced back from her title fight loss to score a decision win in her last contest. It is far from a main event that grabs attention, but is a vital one for the title picture at 125 pounds.
Marvin Vettori Vs Karl Roberson
Here’s hoping this fight doesn’t fall apart again because there is lots of bad blood brewing between the two. They were supposed to fight on May 13, but Roberson was pulled from the fight the day of the show after being deemed medically unfit to compete, which came after missing weight. Vettori confronted Roberson in the hotel after the fight was cancelled, and video surfaced showing no love lost between the two. Vettori has been itching to fight for a while now and has had several fights cancelled, so you know he has some pent-up aggression to unleash. Roberson is an exciting fighter who has lots of skills. This is shaping up to spill some blood. 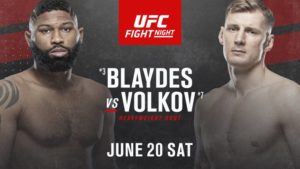 Curtis Blaydes Vs Alexander Volkov
After some questioning on whether this fight would stay on the schedule for this show due to Volkov being overseas, it was recently announced this fight was still on, and it could have a lot of ramifications on the heavyweight title picture. Blaydes is right there in the mix, but unfortunately for him, two losses to Francis Ngannou keeps him blocked from a title shot. Volkov was on a roll before getting his head almost knocked completely off by Derrick Lewis, but is now looking to score his second straight win. Volkov has the chance to play the spoiler to Blaydes’ title aspirations, and Blaydes needs a statement win to keep himself in the title shot talk.
Josh Emmett Vs Shane Burgos
This was announced as the co-main event for the June 20 show, and it has a lot of potential to end up being the best fight of the month. Both men are on a tear as they climb up the featherweight rankings. Emmett has won two straight and four of his last five, with three of those wins coming by knockout. Burgos has won three straight and is 13-1 in his career. Both men are exciting fighters who love to throw down and brawl. This could have easily been a headliner on a card and has the makings of a fun fight.
Lyman Good Vs Belal Muhammad
Good is coming back from being the first UFC fighter to be diagnosed with the coronavirus, so it will be interesting to see how good he looks after recovering. Muhammad has won two straight fights and is 6-1 over his last seven. Both men love to brawl but also have excellent ground games to go along with excellent striking skills. They have the potential to have a classic brawl while also having the potential for a quick finish. Both are looking to break into the next echelon of fighters at 170 pounds and they have the chance to have the best fight of June. 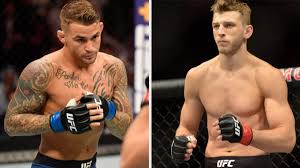 Dustin Poirier Vs Dan Hooker
For starters, this fight has yet to be officially announced by the UFC. It has been reported by numerous media outlets as happening, but the hold-up of an official announcement is making sure they get clearance for Hooker to enter the US for the fight and that his visa gets cleared. If all of that happens, then the fight is on. And what a fight it has the potential to be. Poirier and Hooker are two of the most violent fighters in the sport today, and both are known for absolute wars. Poirier has been out of action since undergoing hip surgery after losing to Khabib Nurmagomedov in September. Hooker has won three straight fights and is coming off an absolute war with Paul Felder in February in one of the best fights of 2020 thus far. These are two of the top lightweights in the world, both of whom are known for exciting fights. This fight should be no less than an absolute exciting war and is the best match-up, on paper, for the month of June, and the fight I’m personally most excited for this month.
Tags: Amanda Nunes, Felicia Spencer, UFC 250

Guide to UFC On ESPN 19: Hermansson vs. Vettori