The hype for big pro wrestling shows just hasn’t been the same since the COVID-19 pandemic. With no crowds, stories and angles feel empty, most promos feel unimportant compared to when crowds were there, and matches that would be okay, or even good with a crowd, seem to be sometimes exposed without one.

WWE has had to promote two PPVs in this time frame. WrestleMania 36 was the opposite of what we’ve come to expect from the yearly spectacle, but it wasn’t going to be with our current time frame. Money In The Bank had a couple of fun matches, but wasn’t must-see in any way. AEW’s Double Or Nothing (lineup here) this weekend has its work cut out for it.

The final Dynamite show was up in ratings from last week’s low-level rated show. Wrestlers such as Hangman Page and the Young Bucks were back. And Jake “The Snake” Roberts and Arn Anderson cut the go-home promos for Cody Rhodes and Lance Archer. However, there wasn’t much else to the show that necessarily felt important, let alone being important enough for a go-home show of one of the four PPVs of the year.

I tabbed a few folks from our Fight Game Podcast Facebook Group who routinely watch AEW live and asked about their interest in the show. I’ll add some of their comments, in addition to my own.

Are you more excited to see the PPV after the go-home show?

Ryan: Somewhat more excited, I think the Stampede match is going to be great. This show wasn’t a home run by any means though.

Paul: Honestly, less excited. There were a few booking choices that were a little too WWE-ish for my liking, specifically Nyla Rose getting the pin in the women’s tag match over her challenger on Saturday and then getting laid out by Shida after the match. Thus, no one gets over. And the schmozz at the end of the Orange Cassidy-Fenix match leading into the ladder match.

Jeremy: More excited. It feels like a fully formed wrestling product at this moment and that is a far greater accomplishment in this climate than I have comfortably given AEW credit for.

Chris: My excitement level remains the same. While I appreciate AEW making due with a bad situation right now, I feel like much of the show is uninspired. Cody and Lance Archer was predictable (which is not always a bad thing), but feels like their hands were forced too soon. MJF is almost an afterthought. Brodie Lee is not catching fire the way many thought he would.

Daniel: No more or no less excited since the go-home show. I was probably more excited after last week and actually thought the PPV was last weekend after how good that show was. So they could have made it then for sure!

Brady: Yes! I didn’t think the show was good overall but I liked what they did to heat up Moxley and Lee.

GG: I think I sit more where Chris is. I wasn’t to excited with the card and it really feels like they’re holding back on some stuff for when fans come back. And if that’s the case, I’m fine. But you’re still asking me to pay $50.

Chris: This feels more like a Clash of the Champions style special than a marquee PPV.

What is the match you’re most looking for and why? 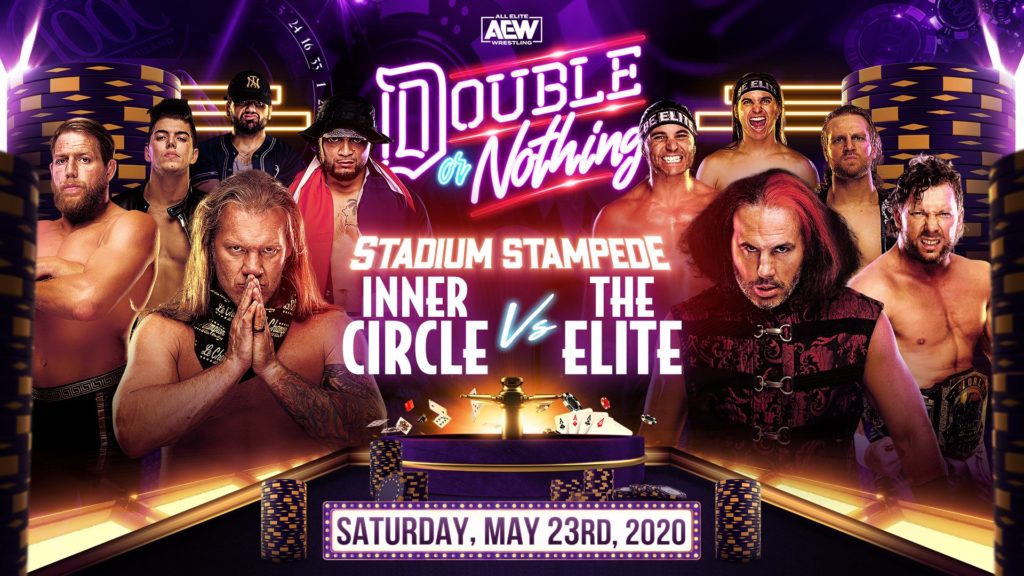 GG: I think this one may be a little all over the board. I’ll wait until the end to give mine.

Jeremy: The Stampede. I feel like we are going to get some forward progress on main event stuff again.

Ryan: Stampede Match. There’s going to be some crazy spots along with a really well thought out entertaining match.

Paul: Stadium Stampede because of the wild brawl the same groups had a few weeks back on Dynamite. With The Bucks and Hangman added into the mix and a whole stadium to work with, I’m exciting it to be wild and a lot of fun.

GG: Maybe I was wrong.

Brady: Moxley and Lee. Something about Archer and Cody isn’t connecting with me even though I think they’ve done an excellent job with Lance. I love Brodie’s character and think they could have a good match in an empty arena.

Daniel: Cody vs Lance Archer for the title. It has a good story to it for the feud and now has meaning to it as well.

Chris: The ladder match, barring any major injuries during it, feels foolproof. It could be the best in-ring match of the Empty Arena era for both companies. I think it also has the most intrigue with so many talents available now to fill in that mystery man spot.

GG: Okay, I feel better about the all over the board comment. My pick is MJF and Jungleboy. It’s an opportunity not only for them to steal the show, but to also put some shine on who could be in the main event in the near future.

Who do you think the mystery ladder match participant will be?

GG: I’m going first. Jeff Cobb! John LaRocca wouldn’t tell me anyway if he knew, but I’m going with Jeff, if only to put John on the spot like I did on our podcast last night.

Brady: I have a feeling I’m going to feel really stupid after the fact. I’m going to go on the record and predict Chris Hero.

Paul: I hope the mystery ladder match person will be the former Rusev. I’m not sure it’s possible so I think it will be PAC.

Daniel: Zack Ryder, or whatever he will be calling himself here.

Jeremy: I think it is Joey Janela. I do not think they will reveal a new roster member at this time.

Paul: I’m looking way more forward to this than any WWE PPV since Royal Rumble. Other than the big 3 or 4, I wouldn’t pay $5 for a WWE PPV if I wasn’t a Network subscriber and especially in this era of closed set shows. I absolutely would not have paid for WrestleMania this year and that’s the first time I can honestly say that.

Jeremy: This one. Mainly because I have confidence that AEW will think outside the box to present a fresher and more contemporary product than WWE is capable of right now.

Ryan: By a wide margin. WrestleMania and Money In The Bank were very blah and AEW seemed to figured out the empty arena shows.

Chris: AEW is doing better with the restrictions than WWE is. I appreciate them trying to provide us with a semblance of a crowd, and still making things feel important.

Daniel: Money In The Bank is one of my 3 favorite PPVs from WWE so I’ll say looking less forward. Had it been another WWE PPV I would have said more forward to it, even if MITB was a little more “unique” this year.

Brady: I don’t see myself ever being excited for a WWE PPV again as long as Vince is alive. AEW has consistently nailed their big shows and even with the handicap of an empty arena crowd, I think they’ll pull it off.

GG: LOL. I’d say I’m looking more forward to this PPV than Money In The Bank, but not WrestleMania.

Chris: WWE often feels like a treadmill even under normal circumstances, but the current pandemic has made WWE feel very flat.

Are you ordering the show and why?

Jeremy: Yes. I preordered before the go-home.

Ryan: Yes. I’ve been dying for any sort of live sports content, even suffering through Raw and Smackdown.

Chris: I will be watching. I get together with one of my lifelong friends every weekend, and pro wrestling or UFC events are always our go-to for entertainment.

Daniel: I am not ordering the show. I stopped paying top dollar for PPVs a long time ago. That’s why I enjoy the WWE Network where I can get my 3 favorite PPVs in for the price of one. If it was $19.99 maybe I’d consider.

GG: WWE killed the value of big shows for sure.

Paul: I’m order the show because I’m quite confident that AEW will do their very best to make this show worth the money and put out something the viewer will enjoy watching.

GG: I wouldn’t normally say this, but I do think that normal price will scare some folks off. If it were closer to what Daniel’s price was, I think they’d do more buys just based on curiosity and boredom. But at regular price, your expectation is a big-time show and I’m not sure you can have a big-time show without a crowd. It all feels so naked. I’m optimistic though. And yes, I’ll be watching live and doing a podcast recap later that night.