Hello everyone, and welcome to this week’s edition of the Monday Morning MMA Round-Up, where we look back at the week that was and look ahead to the week that is in the world of mixed martial arts. Let’s dive in.

Looking Back At UFC’s Week In Jacksonville

Nothing. There are no major MMA events this week. 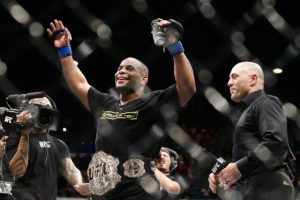 On May 23, 2015, one of the best fighters in the history of the sport finally had UFC gold wrapped around his waist.

Daniel Cormier submitted Anthony Johnson in the third round in the main event of UFC 187 in Las Vegas to become the UFC Light Heavyweight Champion. Cormier actually took this fight on short notice after Jon Jones was stripped of the championship stemming from his hit-and-run incident.

UFC 187 also featured Chris Weidman successfully defending the UFC Middleweight Championship against Vitor Belfort, as well as a crazy heavyweight fight between Andrei Arlovski and Travis Browne. It was one of the more entertaining pay-per-view main cards, and one of the last shows before the Reebok uniform deal took over.

You can watch the UFC 187 main card on UFC Fight Pass here: https://ufcfightpass.com/video/52664.