When the full card for UFC 249 was announced, many fans were quick to hail it as the most stacked UFC card in history. There is no question it is a deep card, with two title fights headlining and a plethora of talent on the card.

Here are just some of the match-ups coming our way this weekend:

That’s pretty deep. But is it the most stacked UFC card of all-time? That is the debate. We are going to put it up to the test against five of the most-stacked UFC cards in history and see where it stands. You be the judge on this one. 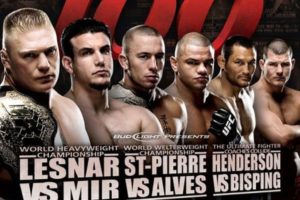 This was a monumental event, the 100th numbered UFC event in history (though they cheated with UFC 37.5). It took place on July 11, 2009, and while it wasn’t until a year later that July 4th weekend was dubbed “International Fight Week”, this was the start of that weekend being the traditional big show of the year.

It featured the two biggest draws in the sport at the time in the two main events, with the biggest fight that could be made at the time, Brock Lesnar defending the UFC Heavyweight Championship against Frank Mir, in the headliner. Georges St. Pierre defended the UFC Welterweight Championship against Thiago Alves in the co-main event. The main card also featured the fight between TUF coaches Dan Henderson and Michael Bisping, as well as the UFC debut of Japanese superstar Yoshihiro Akiyama.

The prelims were stacked as well, with Mark Coleman vs. Stephan Bonnar, Jim Miller vs. Mac Danzig, Tom Lawlor vs. CB Dollaway, Dong Hyun Kim vs. TJ Grant, and a light heavyweight prospect in his third UFC fight, Jon Jones, vs. Jake O’Brien.

The show, which for some time was the biggest pay-per-view event in UFC history, ended up with seven current, former or future UFC champions, four fighters currently enshrined in the UFC Hall Of Fame with several more to come, and arguably the two greatest fighters of all-time on the card.

December 12, 2015 was the culmination of a fight that was being built up for well over a year, a night that capped off a three-event weekend in Las Vegas. It was the night the long-awaited bout between arguably the greatest featherweight in MMA history, Jose Aldo, taking on his nemesis, Conor McGregor.

It was a massive event that did over a million buys on pay-per-view, which ended up seeing McGregor dethrone Aldo in just twelve seconds to stamp his spot as the biggest star in the sport. This show just wasn’t the main event, though.

You had a co-main event for the UFC Middleweight Championship between champion Chris Weidman and challenger Luke Rockhold. Those two were the best two middleweights in the world at the time. You also had the third and fourth best middleweights in the world, Ronaldo Souza and Yoel Romero, fighting. Also on the main card was submission legend Demian Maia against Gunnar Nelson, and future UFC Featherweight Champion Max Holloway taking on Jeremy Stephens.

On the prelims, UFC Hall Of Famer Urijah Faber was in the featured bout, but two other notables, competed in losing efforts. Those would be former title challenger Kevin Lee, and former Interim UFC Welterweight Champion Colby Covington. This was a deep card that ended a huge 2015 for the UFC. 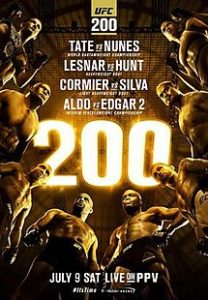 This might be the standard bearer for stacked cards, and the crazy thing was it was scheduled to be even more stacked until Jon Jones threw it into chaos on fight week. This was the end of 2016 International Fight Week, another weekend with three UFC events, all headlined by title fights, and perhaps the most significant week in the history of the UFC, as following this event, it was announced that the company had been sold to WME-IMG (now known as Endeavor).

This card had ten current, former or future UFC champions on it, and it ended with the crowning of Amanda Nunes as the women’s bantamweight champion, starting her run that has led her to being perhaps the best female fighter of all-time. It also had five other fighters that have challenged for UFC titles, and three former TUF winners. It was a star-driven card.

It also had the final fight of Brock Lesnar’s career when he returned for one last fight against Mark Hunt. The show was also saved by Anderson Silva stepping up on two days’ notice to fight Daniel Cormier when Jones was pulled from the fight for failing a drug test. This one was a historic event, and one for the ages. 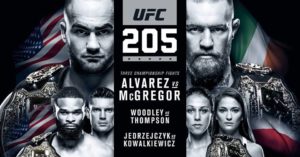 The UFC’s first trip to Madison Square Garden in 2016 may have been equal, or even greater, than their big UFC 200 show in the summer. It had three title fights and ended with the biggest star in the sport’s history becoming the first double champion in UFC history.

It had eight current, former or future UFC champions on it, and 15 of the 22 fighters on the card have competed in UFC title fights. It had many memorable moments capped off with Conor McGregor finishing Eddie Alvarez to become the UFC Lightweight Champion, adding to the UFC Featherweight Championship he held at the time. It also featured a crazy knockout from Yoel Romero on Chris Weidman.

It was the event that had the final fight in the career of Miesha Tate, Joanna Jedrzejczyk continued her winning ways in another successful title defense, and Khabib Nurmagomedov improved to 24-0 and had a famous call out of wanting to fight “your Irish chicken.” It also did 1,300,000 buys on pay-per-view and holds the all-time MMA gate record with just under $18 million.

The crazy thing is this show even lost one of the more anticipated fights on the card, a fight between Donald Cerrone and Kelvin Gastelum, the day before the show, and it didn’t hurt the depth of the card one bit. That is when you know you have a deep card. 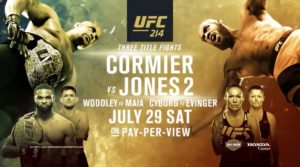 The UFC’s late July 2017 card in Anaheim, California was another show that had three title fights on it, and it featured the long-awaited rematch between Daniel Cormier and Jon Jones in the headliner. It also featured Tyron Woodley defending the UFC Welterweight Championship against Demian Maia as well as Cris Cyborg finally getting her chance to become a UFC Champion.

The show had six former, current or future champions, and an additional six fighters who have fought in a UFC title fight. Among those in undercard bouts were Robbie Lawler, Donald Cerrone, Volkan Oezdemir, Aljamain Sterling, Renan Barao and Brian Ortega.

Jones ended up defeating Cormier for a second time, only to have the title stripped from him after failing a drug test. Cyborg walked away with UFC gold, and the show did an impressive showing on pay-per-view, garnering 860,000 buys. It was also the card of the year of 2017.

UFC 249 might not be the absolute most-stacked event ever, but it is certainly in the discussion and matches up well with all of the above events. It is sure to produce an epic night on May 9.