Update: This was posted before Jacare Souza was pulled from the show for testing positive for the Coronavirus.

One side of me is very excited. Overly excited. Like, more excited to watch fighting than in forever excited. The UFC is back baby! I get to watch some big time fights with my kids again.

I texted my youngest son to ask him if he was pumped up for the show. He replied shortly and sweetly, as eighteen year old boys do with their dads, “So pumped.” And that was all I got out of him.

The card is stacked, as Ryan Frederick wrote about yesterday, and it compares on paper to some of the deepest cards in UFC history.

But on the other side of the coin, we’re all sort of wondering if the UFC should even be having cards yet. Even those who are the most excited are thinking that, even if they don’t want to admit it. There’s an unknown and an uncertainty that surrounds the COVID-19 pandemic. Unknowns and uncertainties are scary and to some, the way of dealing with fear is to simply not deal at all and pretend that it’s just an overblown situation. They just want things to get back to normal, even if we may never get back to the pre-Coronavirus normal.

Dave Meltzer and I talked about this on my podcast this week. I even opened up the interview by asking him about his thoughts on the show as a fan, even though it is his job to cover it.

I understand that feeling of thinking back to what life was like before the pandemic. As Jay Z once rhymed, “It was all good just a week ago.” Or in this case, just over two months ago.

One of my hometown radio guys Ralph Barbieri used to say, “Two things can be equally true.” And that works here. We can both be excited to have real sports back in our lives and have a little bit of a queasy and maybe even guilty feeling in the pit of our stomachs at the same time. It’s the deal you made as a MMA fan anyway. We’re not watching chess (though I bet Bobby Fischer could’ve set up the rear naked choke with the best of them). We’re watching a brutal sport where athletes prepare to fight until they can’t. In order to be a fan of MMA, you have to be okay with watching something that isn’t safe.

Kudos to the UFC for making this as safe as possible, per Marc Raimondi’s piece for ESPN.com. With giving each fighter the swab test as well as the antibodies test, I think we can be as close to certain as possible today that no fighter who has the Coronvirus will fight. On the flip side, couldn’t those test have been better used for those who are actually sick and need them? These are my conflicted feelings when it comes to how excited I am, versus how I’m kind of ashamed to be as excited as I am. 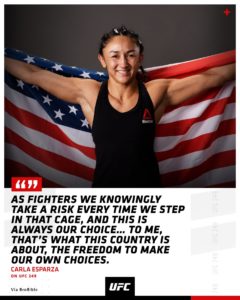 Another positive is that fighters can earn their living again. Team sports athletes who have unions and associations are in much better shape than fighters, boxers, and pro wrestlers; the truly rich of those sports excluded. On the other hand, why do they have to be brave and fight in the midst of the pandemic and their compromised immune systems from cutting weight?

While Carla Esparza’s toughness can’t be denied, I doubt that she knew she was going to be fighting during a time when the leaders of the states mandated that people stay at least six feet away from each other. Her boss is supposed to be the one to protect her here, even if she can’t be protected from herself. That’s exactly what Adam Silver did when it was learned that Rudy Gobert tested positive for the Coronavirus. And the rest of sports followed… until now.

Speaking of her boss, Dana White is coming across as the most disillusioned leader in sports. Blaming the cancellation of things on the “wimpy media” is Dana’s insecurity stripping itself down naked.

But even then, my disdain for his words won’t stop me from watching the UFC. That guilty feeling in the pit of my stomach is there again. But I’m okay with that. Ralph Barbieri was right. I’m conflicted, but I’m excited. So pumped.

10 UFC Fights To Watch In June