Ryan Frederick lists out the 10 UFC fights to watch in May. Check out his list below.

The UFC is returning this upcoming weekend with empty arena shows taking place in Jacksonville, Florida. UFC 249 on May 9 is the first of four events in the month of May, with other scheduled events taking place on May 13, May 16 and May 23.

While this column will be coming to you at the beginning of the month in the future, the nature of these particular events is that they’re coming together on short notice, with not even a card ready to go for the May 23 event. This will typically highlight fights to look out for during the month, but with only one fight currently booked for the May 23 card, we are just going to take a look at the first three events.

Here are your fights to watch as the UFC runs three events in eight days. 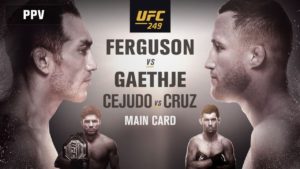 The Interim UFC Lightweight Championship is on the line in the main event of UFC 249. While Ferguson was initially slated to finally fight Khabib Nurmagomedov, the COVID-19 pandemic threw yet another wrench into those plans as Nurmagomedov went back to Russia and quarantined himself. He wouldn’t have been available for May 9 anyways as he observes Ramadan, which is currently taking place.

In stepped Gaethje to take his place, and we have a fight that promises all sorts of violence. Gaethje might be the most exciting fighter in the sport right now, and Ferguson’s fights always become bloody wars, well, at least for his opponents. These two bring all kinds of crazy into the Octagon, and it should be a treat for all fans who order on pay-per-view.

Henry Cejudo returns from shoulder surgery to make his first defense of the UFC Bantamweight Championship. He was originally scheduled to defend against Jose Aldo in Brazil, but the pandemic kept Aldo from traveling from Brazil, and Cejudo’s first defense had to undergo a major shift.

In stepped Dominick Cruz, the former two-time UFC Bantamweight Champion and arguably the best 135-pound fighter in the history of the sport. Cruz getting the shot was met with a lot of questions as he hasn’t fought since December 2016, but it was also a situation of Cruz being the best option available.

Any detractors of this fight should step back and realize that this is arguably the best fight that could be made at 135 pounds. Cruz is one of the all-time greats in the sport, and Cejudo is trying to carve himself into that category. This is a big fight for Cejudo to prove he is a legitimate champion at 135 pounds, and a big chance for Cruz to show that he is still the man to beat at 135 pounds. This has all the makings of an extremely interesting fight.

Originally scheduled to be a five-round main event on March 28, the heavyweight sluggers Ngannou and Rozenstruik will enter the Octagon looking to stamp their claim as the most dangerous heavyweight in the sport.

Ngannou has won his last three fights in just a combined 2:22, bringing back the talk of him being the most dangerous man in the sport, something that was being questioned after he lost back-to-back fights to Stipe Miocic and Derrick Lewis. Rozenstruik has taken the UFC by storm, debuting in February 2019 and ratting off four wins by knockout during the year, ending with a last-second knockout of Alistair Overeem in December that split Overeem’s lip open.

The winner of this fight is likely the next man in line for a heavyweight title shot, though that may be something that comes with a long wait. Nevertheless, this one has the makings of an all-time heavyweight slugfest.

This is such an interesting fight to be taking place at this time, and one that wasn’t even in any plans as it was kind of just thrown together when the UFC was trying to fill this card. It is a rematch of a January 2013 bout won by Pettis, but this comes at a different time in both of their careers. That fight had title implications on it, but now they both find themselves at a crossroads.

Cerrone is coming off a quick loss at the hands of Conor McGregor in January; a fight he admits he didn’t show up for. Pettis is also coming off a loss in January to Diego Ferreira. Pettis is just 4-8 in his last twelve fights since he was a UFC champion, while Cerrone has lost three straight. Unlike the first time they fought, this one will be at 170 pounds. It is a big and pivotal moment for both men and both find themselves in a must-win situation.

This is another fight that was originally scheduled to take place on April 18 but was pushed back for this card. This also represents two fighters on very different paths at this point in their career. Hall has won two straight and three of his last four fights, and finally looks like he’s coming into that potential that he has always shown. He has also transitioned his main training camp to Fortis MMA in Dallas, one of the rising top gyms in the sport, going as far as sleeping on the floor of the gym to get prep time for this fight.

Meanwhile, Souza has lost two straight and three of his last four, and moves back down to middleweight after a fight at light heavyweight. Now 40, Souza might be the best fighter to never challenge for a UFC championship, and he has to get back into the win column now and make a run or he may have that distinction for a long time. This has all of the makings of a highly interesting and important fight. 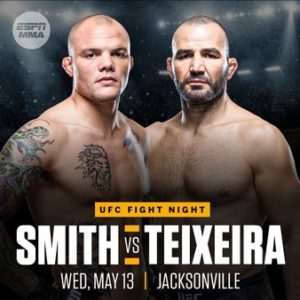 Originally scheduled to headline an April 25 card in Omaha, Nebraska, it was supposed to be Smith finally getting a headline fight in front of a home crowd. Instead, it will be in front of no fans in Jacksonville, but will have just as equal importance. Smith hasn’t fought since submitting Alexander Gustafsson in June, and was in recent headlines for stopping an intruder in his home. Smith fought for a UFC title last year and his goal is to get back to a title fight.

He also says he wants to be the first man to submit Teixeira, and that could be a tall order. Teixeira is on another run in the division as he has won three straight and is looking to get back into the top five in the division. He turned 40 in October, but he hasn’t shown any signs of slowing down. He’ll be an underdog here, but an upset win would not come as a surprise.

Alexander Hernandez looked like he was on a fast rise up the lightweight rankings as one of the best young prospects in the sport. He had a setback against Donald Cerrone in January 2019, but found himself back in the win column after defeating Francisco Trinaldo in July. He returns to action for the first time since that fight looking to continue his rise back up the lightweight rankings.

Dober finds himself on the best run of his UFC career. After just one win in his first five UFC bouts, he has gone 7-2 in his last nine. He’s won his last two by knockout, with the fights lasting a combined 2:17. He’s looking to break into the rankings and a win over Hernandez may just do the trick. This fight has the makings of a very exciting lightweight fight, and is a fight that was put together on relative short notice. 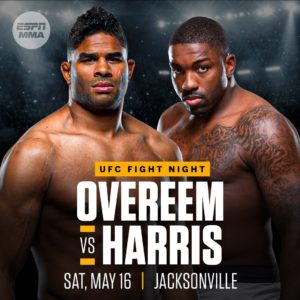 Hearts will be heavy in this one as Walt Harris will fight for the first time since the disappearance and death of his stepdaughter. Fans watching at home will certainly be in his corner and he will be looking to build on his last two fights, two knockout wins that lasted just 62 seconds. It is his first UFC main event, and he gets a tough veteran as his opposition.

Overeem looked on his way to a win in December over Jairzinho Rozenstruik before a last-second punch knocked him out and split his lip in the process. Instead of being on a three-fight win streak, he now finds himself in a must-win position if he ever has aspirations of fighting for a UFC title again. These two were originally scheduled to meet in December, and again on April 11, so this one has been in the makings for some time, and is sure to deliver.

The most active fighter in the sport, Angela Hill, who fought on the last UFC event held in March, fights yet again, for the third time in 2020, taking on a tough test in Claudia Gadelha. Gadelha, who has challenged for a UFC title in the past, is looking to gain some consistency after going just 2-2 over her last four. She is coming off a win over Randa Markos in July and has been battling injury issues of late.

Hill has won three straight and four of her last five and finally finds herself immersed inside of the UFC’s official rankings. She has been getting better-and-better with each appearance in the Octagon, showing that being active has paid huge dividends. She is looking for the biggest win of her career against Gadelha, and a win would vault her way up those rankings.

This might actually be the best fight on that May 16 card and it has the potential to be one of the best fights of the big UFC week. Barboza makes the move down to 145 pounds for the first time, and he doesn’t get an easy task for his first time in the division. Barboza has had arguably one of the toughest roads in the UFC, and is looking to start a run in the featherweight division after dropping four of his last five fights.

Ige has put together a very nice win streak for himself, winning his last five fights after dropping his UFC debut. He may just be the most underrated fighter currently at 145 pounds. He finds himself just outside the top-15 of the UFC’s rankings, and a win here over a former top-five lightweight would do a lot to prove that he is a real contender at 145 pounds. This one should be fireworks.