Justin Knipper joins the We Want Flair party with a supplementary post about an oft-forgotten Flair classic performance.

The “wrestling a broomstick” trope has existed for years. It’s a high compliment that expresses how a wrestler can have a great match with anyone, regardless of their abilities—or lack thereof. If a wrestler could have a great match with a proverbial broomstick of an opponent, said wrestler is often perceived by their peers as the real deal, a true professional. And the wrestler most commonly associated with this trope? Ric Flair.

What made Flair such a valuable champion was his ability to make lemonade out of lemons regardless of how he was booked. In early 1987, then-NWA World Heavyweight champion Flair trekked over to Japan for what turned out to be his final tour with Giant Baba’s All Japan Pro Wrestling. Annual visits to Japan were commonplace for NWA World champions during the late ‘70s and into the late ‘80s, as Baba had a longstanding working agreement with NWA, originating after the company launched in 1972.

Who was Hiroshi Wajima?

Hiroshi Wajima is still recognized as one of the most important sumos of all time. He was one of Japan’s most popular celebrities in the ‘70s and into the early ‘80s while sumo experience peak levels of popularity. He was a phenom, reaching yokozuna level while he was still in college. He’d go on to win makuuchi, sumo’s top division, on fourteen separate occasions, all at a time when sumo was at peak popularity. Dave Meltzer of the Wrestling Observer Newsletter compared his level of celebrity to that of someone like LeBron James. Needless to say, Wajima was a big deal.

After retiring from sumo in 1981, Wajima became a stablemaster, though not for long: In 1985, he was found to have been putting up his management rights at the Japan Sumo Association as collateral for debt on a failed restaurant Wajima opened that year. As a result of this, Wajima’s stable was disbanded by the association, and Wajima himself banned from re-entering the world of sumo indefinitely. Still needing to pay off his debts, Wajima turned to Shohei “Giant” Baba, owner and star talent of All Japan Pro Wrestling.

Mr. Baba told me, “Become a man one more time.”

Baba first took Wajima to Hawaii to train pro wrestling, where he spent time training under Pat O’Connor and Dory Funk, Jr. Later, Baba took Wajima with him to the US to wrestle for Crockett Promotions hub cities like St. Louis and Charlotte, among others. The two had a handful of tag team matches with enhancement teams in the States over their six-month stay in ’86, and the footage was often used on AJPW’s weekly television to promote Wajima’s debut.

You can listen to the We Want Flair podcast for more on Ric’s battles.

On October 30, 1986, Wajima finally debuted for All Japan, taking on Tiger Jeet Singh. The bout was originally planned to be held at Ryogoku Kokukikan Sumo Hall, Tokyo’s most famous venue for sumo, but because of the severity of Wajima’s situation, the venue chose to bar the company from using the hall, which lasted 14 years.

His debut against Singh took place in Wajima’s hometown, Nanao, instead. Despite not being in Tokyo, 24 million viewers watched the match on AJPW TV a few days later. It turned out to be All Japan’s show’s highest television rating of the decade.

The debut was a success, for the most part. Baba was able to use Wajima’s pedigree as an accomplished athlete and mainstream celebrity into the late-‘80s box office cash. Hiroshi Wajima was a name, and a name sells tickets. Baba booked him as virtually unbeatable too, only falling to Genichiro Tenryu, Stan Hansen and Flair in singles bouts.

So then why isn’t he considered an All Japan legend? The short answer: Wajima was not a good wrestler.

It’s not meant as a slight, but with hindsight, it’s easy to see how limited Wajima was. His in-ring work was rudimentary at best, albeit passable. His sumo experience and access to high-level training from legends like Funk and O’Connor allowed him to catch within months, but this 38-year-old rookie turned out to be only as good as his opponents were. Case in point: About a year after his match with Flair, Wajima went on to have what was deemed the Wrestling Observer’s Worst Match of 1988 with another notorious broomstick, Tom Magee.

The task given to Ric Flair on March 10, 1987 was to have a great match with proverbial broomstick, Hiroshi Wajima. It was on what would be Flair’s last tour with AJPW, as the promotion had a falling out with Crockett Promotions, who were then transitioning into what eventually became WCW. Flair would wrestle six matches total in his final week, including three singles matches against Yoshiaki Yatsu, Jumbo Tsuruta and Tiger Mask II (Mitsuharu Misawa), each one impressive. No surprises there. The real feat would be pulling something great of someone who was not-so-great. 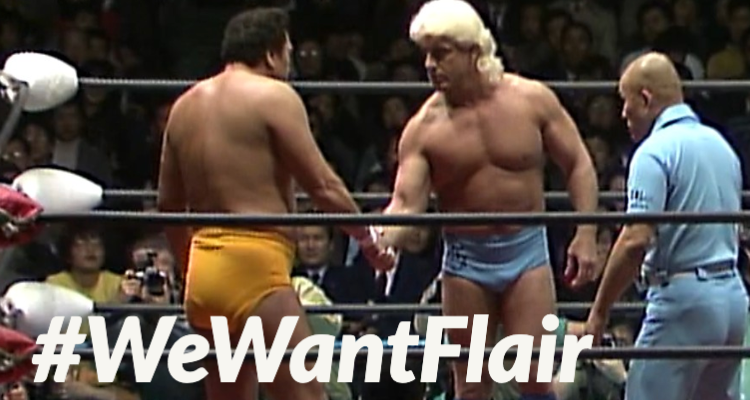 Wajima made his way to the ring to the tune of “NTV Sports March,” the AJPW TV intro theme, which was also Baba’s theme song. Wajima had been hyped like crazy on AJPW TV for months prior, with All Japan even airing special episode on him weeks before, an hour long promo video centered on Wajima’s training.

Next out was Flair. On his way to the ring, he looked deathly serious, almost grim in demeanor. He shot dirty looks at some fans for touching him. It was a somewhat different Flair than American fans at the time would have been used to, more serious and sportsmanlike than the wheelin’ ’n’ dealin’ showman we learned to love.

In the ring before the bell, Flair offered his hand and shot Wajima an icy stare. The “WA-JI-MA!” chants started early on and grew louder as the first part of the match unfolded.

The two felt each other out at first, carefully. Flair was determined to have Wajima come off as a legitimate threat to his belt, a monster with a chance. When they locked fingers in a Greco-Roman knuckle lock, Flair started turning it on, shrieking in agony, transforming himself from distinguished world champion to namby-pamby wrestler in seconds, pulling back from the utter power of “Golden Arm Bomber,” Hiroshi Wajima.

When he broke out from Wajima’s grip, Flair acted cocky and let out a loud “WOO!” to the delight of the Budokan crowd. As the match continued, Flair would exaggerate most of his bumps for Wajima. The over-selling, the way Flair sold submissions, all of it made Wajima feel like a beast without him having to do much at all.

Later, Wajima no-sold a few of Flair’s chops, then launched him across the ring with a hip-toss. Flair begged off and rolled to the floor. The crowd chanted Wajima’s name while Flair shooed photographers off so he could collect himself outside.

Back in the ring, Flair tried but was not able to knock Wajima over with a shoulderblock. Wajima seemed sort of lost here, looking so impressed by Flair’s in-ring wizardry that it actually took him out of the match at times.

Wajima later laid in more strikes and Flair kept begging off. “WA-JI-MA!” chants intensified. He then cranked on a side headlock for about three minutes and the crowd settled. Flair countered and wrestled Wajima into a corner and chopped him up. He let out another ”WOO!” that the crowd mimicked. Wajima then fired up and we saw an organic charisma come out of him, a characteristic only someone like Flair could pull out of a rookie broomstick like Wajima.

Flair noticed Wajima’s fire and decided to pick up the pace, flopping like a giant fish out of the ring to the floor after a Wajima whip. Flair went on begging off, but Wajima wouldn’t let up on the chops until Flair went after his right knee, stomping the hell out of it. He continued softening up Wajima’s knee until he could sink in the figure four leglock. With massive support from the Budokan crowd, Wajima powered out and reversed it. Flair sold this like he was having his knee torn in half.

Wajima was able to catch Flair in his patented Golden Arm Bomber finish, a chokeslam variation, but the spot looked beyond akward, though Flair saved it by acting like he was seeing stars. Wajima then laid Flair out with a lariat and another shoulderblock—sumo power offense—then went for a Dory Jr.-inspired spinning toe hold. This backfired, though, as Flair used an inside cradle to put Wajima away and walk away still NWA World champion in 18:29.

Wajima looked exhausted as the two shook hands afterwards. This was the biggest match of his life, and one of the most important bouts in Japan that year; exhaustion is to be expected.

Flair didn’t strut or taunt or jaw-jack afterwards. He sold the victory as a seriously close-call that only a champion’s skill would be able to pull off—in storyline.

This is what championship matches should always strive to be in the end. The “heel” or outsider champion walks away with his title, but not completely unscathed, while the challenger doesn’t lose face on the clean loss since it was a clever, well-timed wrestling hold that took out Wajima. Flair never had a chance of beating Wajima in the eyes of the fans because of Wajima’s legit track record: he was one of the strongest sumos in history. You couldn’t have someone come in and make him look like a joke or a scam wrestler, but on the other hand, there was also no realistic way Hiroshi Wajima would walk away as NWA champion, a complete unknown overseas who had under a year of pro wrestling training.

Flair legitimized Wajima’s pro wrestling career. He made Wajima look like he knew what he was doing, he constantly played to Wajima’s strengths and away from his limitations. Flair went above and beyond here, bouncing in and out of the ring, constantly begging off, always launching himself a few extra feet to make Wajima feel that much more of a threat. He left the Budokan crowd feeling that a) Wajima’s really strong, b) If Wajima had more experience, he might have beaten Flair and c) Flair is very clever, which is why he’s the champion.

Neither here came off looking foolish or weak. I’d argue that Wajima’s stock increased even though he lost a singles match, and clean, to boot. It was an easy story for fans to buy; not everyone can beat the champion, and, hypothetically, Flair and other NWA champions were champs for a reason: They were the real deal. Or at least that’s how they were marketed based on their skill. Flair proved his worth and then some in this, proving that no matter what you give the Man, he’d make it work.