Ryan Frederick is in Las Vegas this weekend and will be updating this UFC 246 live blog frequently.

LAS VEGAS– Hello readers, this is Ryan Frederick, and I am live in Las Vegas this week for UFC 246 featuring the return of Conor McGregor as he battles Donald Cerrone in the main event.

For those unfamiliar with me, I currently write the UFC recaps for the Wrestling Observer Newsletter and handle a good majority of the live coverage of UFC events on the Observer web site, as well as other UFC news and behind-the-scenes coverage both on the site and on the message board.

While this ongoing blog won’t feature any actual live coverage from the event, which will be available on the Observer site (though I may sneak some tidbits in on fight night), this will be an all encompassing look at fight week, from media day to weigh-ins to other general going-ons during the weekend in Las Vegas.

As I do travel to several UFC fight weeks over the year (having done so for the last fifteen years and counting), this will be the start of what will be an ongoing series here on the Fight Game Media Blog. So, check it out, hit me with some feedback on things you like or would like to see, and follow along here all weekend, and also feel free to follow along with me on Twitter and Instagram- I’m @ryanjfrederick on both.

7:00 PM PT– Huge upset here as Roxanne Modafferi beat Maycee Barber by unanimous decision. Modafferi was completely dominant in this fight and Barber suffered a knee injury during the fight as she could barely walk or stand for a good portion of the fight. Also, Sodiq Yusuff beat Andre Fili by unanimous decision in a fun scrap.

5:53 PM PT– Askar Askarov defeated Tim Elliott via unanimous decision in a fun flyweight fight. It had some good action in the second but Elliott was really tired in the third.

5:15 PM PT– We have our first finish on the show as Drew Dober blitzed Nasrat Haqparast and dropped him with a hard left hand and finished it on the mat. Haqparast took a few shots that he shouldn’t have as referee Mark Smith was a tad late in stopping it. This was an excellent showing by Dober.

4:59 PM PT– Aleksa Camur just defeated Justin Ledet by unanimous decision. This was really boring. Camur has a lot of talent but there are tons of holes in his game. Ledet just isn’t very good.

4:30 PM PT– As usual with the Las Vegas shows, there is barely anyone in the arena for the first fight. Sabina Mazo beat JJ Aldrich by split decision in the opening bout, a really good back-and-forth battle on the feet that saw both women tag the crap out of each other.

3:00 PM PT– After a morning of getting excited for tonight and feeling that there is now a buzz now that fight day is here, I’ve made my way into T-Mobile Arena for the fights tonight. The people in Las Vegas seem to be split on whether McGregor or Cerrone will be winning, but the overwhelming feeling is that most hope McGregor will win. And, for those curious and who like these sorts of things, tonight’s media meal was barbecue.

4:00 PM PT– The ceremonial weigh-ins just wrapped up. Prior to them taking place, Chuck Liddell was awarded his UFC Hall Of Fame jacket. The ceremonial weigh-ins got started late due to Conor McGregor being late, but they went rather quickly and not much happened. There is some Irish contingent in town, but definitely not like the heyday of McGregor’s rise back in the day, and this was a more subdued weigh-in that prior McGregor fights. It also was in a smaller arena as it was at the Park Theater, which was packed.

11:00 AM PT– The weigh-ins, for the most part, just wrapped up. Sabina Mazo missed weight initially at 126.25 pounds, but UFC officials have said that she will be coming back shortly to make weight. Shortly later, the Nevada Athletic Commission announced that the Alexa Grasso and Claudia Gadelha fight has been cancelled due to Grasso badly missing weight.

10:00 AM PT– We just had our first big miss during weigh-ins as Alexa Grasso weighed in at 121.5 pounds, missing weight by 5.5 pounds for her fight against Claudia Gadelha. She looked in rough shape and needed the curtain just to get to that mark. It remains to be seen whether the fight will still take place, but Grasso will be fined a good amount. We still have two fighters left to weigh in, one of whom is Maycee Barber.

9:43 AM PT– Conor McGregor just weighed in a few moments ago at 170 pounds. He looked very strong and in tremendous shape, so maybe Dana White’s comments about him being too small for 170 pounds got to him. Holly Holm also made weight and she came into the room already stripped down to weigh in and looked a little rough. Also making weight during this time were Claudia Gadelha and Andre Fili, who said “Thank God that’s over” after weighing in.

9:13 AM PT– After 14 minutes, we are more than halfway through the official weigh-ins. Donald Cerrone was the first on the scale weighing in at 170 pounds. No one has missed so far and only Nasrat Haqparast needed the use of a towel, but he made weight. Among those having already weighed in include Anthony Pettis, Raquel Pennington, Diego Ferreira, Roxanne Modafferi and Sodiq Yusuff.

8:13 AM PT– I am here bright and early at the Palms Casino & Resort for the official weigh-ins. There is certainly a buzz around the Las Vegas Strip about the fight and a bunch of places offering deals to watch the fight, and people traveling from all over for the fight. I have yet to see a huge Irish contingent for McGregor, but that could be a different story at the ceremonial weigh-ins later. I will have a few series of updates throughout the weigh-ins. 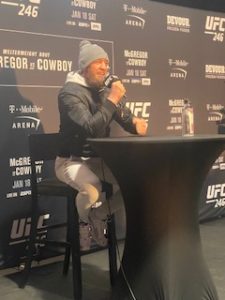 3:50 PM PT– It was finally time for Conor McGregor. He only showed up thirty minutes late, a lot better than in the past. He didn’t speak for very long and it was a lot of the same questions he’s been answering all week. He reiterated his desire to rematch with Khabib Nurmagomedov, but brought up a big interest in fighting Tony Ferguson, something he hasn’t mentioned as much. There wasn’t much new information here. That’s it for media day. 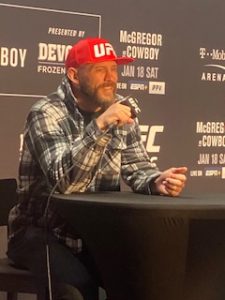 2:10 PM PT– Donald Cerrone showed up for his scrum at media day leading a pack of Harleys through the parking lot of the UFC Apex. When he took the stage, he looked in a great mood, saying he was weighing 174 pounds and it’ll be easy to cut the four pounds, whereas he’s usually miserable on this day. Despite that, he says he is going back to 155 pounds for his next fight as the natural welterweights are too big for him. He did look a little nervous as he said he even questions which Cowboy is going to show up, but says the best version of him will show up. He also mentioned he signed a new six-fight contract starting with this fight, and it is the biggest contract of his career. This has been the longest media day I can ever recall.

12:57 PM PT— UFC 246 Media Day just wrapped up, aside from McGregor and Cerrone. It was a packed house asking a lot of the same questions, but every fighter seemed lively. No one looked to be drained from a weight cut, but the next twelve hours will be crucial as there are several fighters on this card whom have had issues with weight cuts. The fighters squared off at the end and everything was cordial, lots of respect between opponents up-and-down on this show. 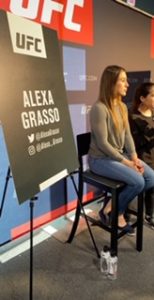 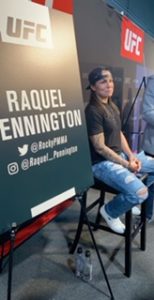 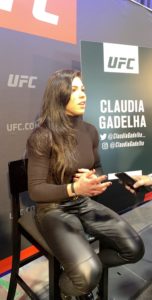 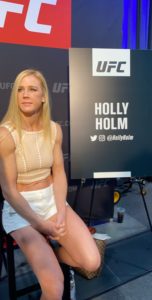 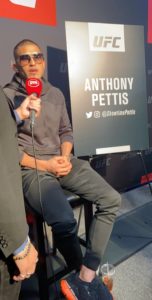 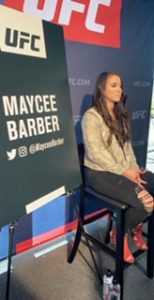 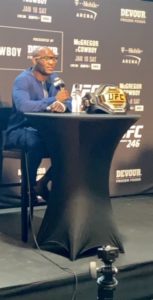 11:22 AM PT— Kamaru Usman took the stage for a scrum and was sporting a big cast on his left hand. He said he wasn’t sure when it was coming off and that he has no timetable for returning, and is spending his downtime getting beat up as himself on EA UFC 3. He said he would fight anyone and is not picking and choosing, but reiterated that he wants to fight Georges St. Pierre more than anyone. He also said he would fight Conor McGregor if that is a fight McGregor wants, and he refused to even say Jorge Masvidal’s name. He also said he isn’t looking for the “money fight”, just that he wants to prove he is the best.

10:50 AM PT— Jorge Masvidal took the stage for a media scrum. He announced that he was coming out with a new mezcal and invited everyone to a party at the Aria later. He talked about wanting to fight no sooner than April, and that Conor McGregor is the fight he wants should McGregor win. He thinks Kamaru Usman doesn’t want to fight him, and says after himself, Tyron Woodley is the second best welterweight in the world. He also said he only wants to fight for three more years, and ended his scrum by asking 20-year-old UFC featherweight prospect Chase Hooper if Ben Askren is his dad. He was very lively and this was a fun time. 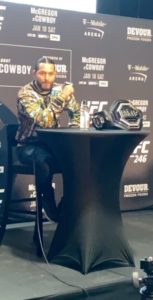 10 AM PT— I have arrived at the UFC Apex for UFC 246 Media Day, which will start in about an hour with Jorge Masvidal doing a scrum first. Huge media turnout this week, as can be expected for a McGregor fight. The UFC Apex is a beautiful facility. I will have some tidbits coming up.

7:50 AM PT— After an hour travel delay due to weather, I just landed in Las Vegas and am heading to the UFC Apex facility on the UFC Headquarters campus, where they film Dana White’s Contender Series and future programming, for UFC 246 Media Day.

In a late addition to the fight week schedule, before the UFC 246 fighters take the stage, UFC Welterweight Champion Kamaru Usman and BMF title holder Jorge Masvidal will also be taking part in media scrums, perhaps teasing some future news?