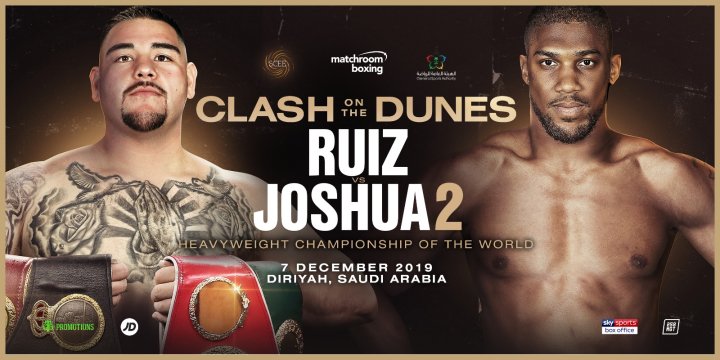 The much anticipated rematch to this summer’s biggest boxing upset is now upon us. It’s raining in Riyadh should’ve been the tagline for the fight. The main event should start in a few hours.

Until then, you can check out the podcast segment that I did with Carlos Toro from Fightful.com. The boxing talk starts at the 52:48 mark.

Also, you can check out the predictions column that we did yesterday with thoughts on the big fight tonight.

We’ll be back when Ruiz and Joshua walk down that aisle.

More movement from Joshua, but not much unlike the first fight where he won the early rounds. It was when he knocked Ruiz down that he went for the kill and closed the distance to Ruiz’s advantage. Joshua won the round and then landed a right hand that opened up a cut on Ruiz’s left eye.

Joshua is still holding his lead hand low which was an issue with Ruiz’s over-hand right in the first fight. But Ruiz has to be able to get inside. He was able to land something on Joshua which may have cut Joshua.

The size of the ring really stands out here. Joshua is able to move as much as possible and never get tied up in the ropes. Ruiz can’t use the ropes to trap him at all. He’s cruising so far.

Joshua is now really sticking his jab in Ruiz’s face. But Joshua got a little lazy and let Ruiz get inside and he ended the round strong. That’s the first thing that he’s done. He needs to do it more.

After some decent success at the end of the last round, Ruiz looked pretty frustrated trying to land his right hand in that round. He was clearly short on it a few times.

Joshua landed a short left hook that Ruiz didn’t see coming. If it had more steam on it, it might’ve dropped him. They got tied up and Ruiz hit him on his back twice out of frustration as well. Ruiz landed a nice left, but it’s just one shot types so far.

Ruiz is really frustrated now. Whenever he feels like he has a shot to land a punch, it’s short, or Joshua is out of there. Joshua isn’t putting much steam on his shots so he can get out of dodge quickly. Great strategy.

Ruiz is trying to anger and bait Joshua into mixing it up more by fighting a bit dirty. And it sort of worked. That was Ruiz’s best round. He’s mucked up the fight a bit. We’ll see if Joshua responds.

Joshua responded by fighting a smart round again. Ruiz was able to land a great right hand late, but it was based on having to eat a few.

It’s possible that Joshua has padded quite the lead and these last successful Ruiz rounds may not mean anything. But Ruiz is coming on decently strong, when I thought he would fade. I still think Joshua ekes the last round with his jab, though Ruiz landed the best punch of the round which was an overhand right.

That round was exactly what Joshua wanted. Ruiz is going to need a big finish. Joshua has tallied up the points. He just needs to stay away now.

Joshua landed a big right hand and instinctually wanted to follow up, but smartly got out of there. Ruiz would’ve been fine eating it if it meant Joshua was going to mix it up.