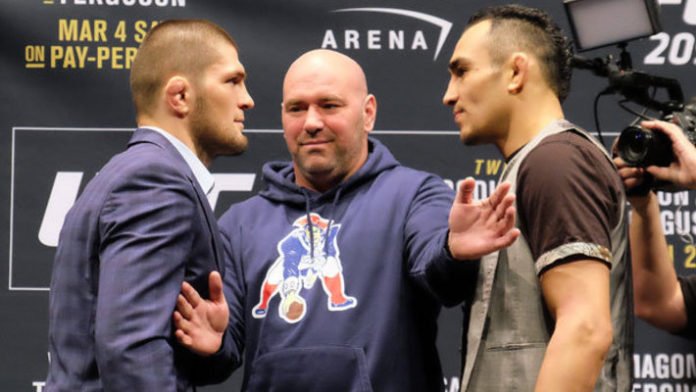 John and GG are back with two shows talking about Conor McGregor, Ferguson vs Khabib, favorite wrestling matches, gimmick boxes, and more.

John and GG are back with two episodes of the Fight Game Podcast.

They mention their new project for 2020, which is a deep dive through major Ric Flair matches and angles called #WeWantFlair.

They talk about the news of Conor McGregor facing Donald Cerrone in January.

They bring up their memories of Thanksgiving wrestling, before talking about their favorite matches from last weekend’s TakeOver and Survivor Series shows.

They talk about both Wednesday night shows with NXT being the better show than AEW Dynamite.

They talk about the news that Deontay Wilder and Tyson Fury are getting back in the ring together for their rematch in February.

In the second episode, they talk about more cable (gimmick) box stories from their youth before getting into the main news of the day, which is that Tony Ferguson and Khabib Nurmagomedov are set to fight (yet again) on April 18th in Brooklyn. They talk about the anticipation of that fight as well as the end of this year for the UFC and Q1 for 2020.

They then go back in time to discuss Survivor Series 1993 as well as the Raw the following Monday. It’s a crazy time for the then WWF and lots of things are happening. The Survivor Series isn’t good, but there’s a ton of things to go over from that time frame.

They end the show talking about John’s induction on Saturday to the Nor Cal Pro Wrestling Hall of Fame.