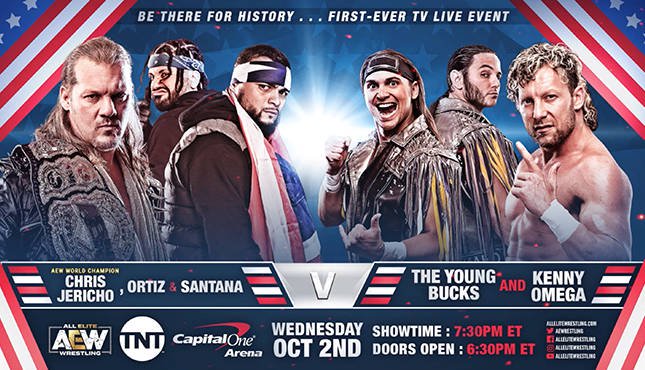 Check out our AEW Dynamite live coverage for their inaugural television show.

It’s the first ever AEW Dynamite show on TNT which goes head-up against NXT’s third ever show on USA. The match to lead-off AEW Dynamite is scheduled to be Cody Rhodes vs Sammy Guevara. We’ll be back once the show begins.

On the dark match, Darby Allin beat Cima with the trust fall splash. Kevin Smith and Jason Mewes (aka Jay and Silent Bob) are in the front row.

JR, Excalibur, and Tony Schiavone are your announce team.

They did a nice intro piece to Cody vs Sammy. Cody said if he loses to Sammy, it affects the title match.

These guys were a bit nervous and it showed. And that’s not a knock. Hard spot to be in.

Cody used an Oscutter and neither JR or Tony called it what it was. Excalibur should’ve said something. Cody did a powerslam and rather than comparing it to brother Dustin or to Randy Orton, he compared it to Buzz Sawyer.

Back in the ring, Cody looked like he was crying. Tony Schiavone came in to interview him. Guevara wanted a handshake from Cody and while Cody’s back was turned, Chris Jericho came in and attacked him. He hit him with the Codebreaker.

They hit the commercial break which was picture-in-picture, which means that we saw more of Jericho’s attack on Cody which was another Codebreaker, a belt shot, and a powerbomb between two chairs.

MJF cut a wicked promo on Cutler on the way to the ring.

It was a short match and not what you’d call a squash. Cutler got some offense in and almost botched a Canadian Destroyer. He went to the top rope and fell off, which didn’t look like it was planned. But he immediately sold his leg and MJF put him in the Fujiwara armbar.

Chris VanVleet did an interview with Kevin Smith and Jason Mewes and Jack Evans and Angelico came out. They said that Morris Day and the Time sucks. Mewes said they can’t win a match. Private Party came out. That was that. JR put over the tag title tournament.

SCU did a promo, calling DC the worst town they’ve ever been in.

Tony interviewed them live and they were interrupted by the Lucha Bros before they started throwing hands. Back to commercial!

These guys have really good chemistry together. Pac got offense in early. Hangman hit the old Razor fallaway slam from the second rope. He then herc’d him up into a vertical suplex in a strongman move. Pac was a deliberate heel and during the commercial, he did all of Chris Jericho’s greatest hits with the crowd and the heel work.

Hangman’s comeback was a spinebuster and powerslam. Pac hit a low blow and locked in the Brutalizer and Page tapped.

This is your normal David and Goliath story. Riho was doing stomps to Nyla’s back and during one, Nyla stood up on her and dumped her on the side. Riho did a dive off the top and Nyla just caught her and dumped her.

Nyla had Riho on the outside forever. She stacked chairs flat on top of each other. She placed Riho on top of them and jumped off the apron, but Riho moved and she somersaulted on top of them.

Riho tried to carry Nyla on her back and just went down like a stack of cards. Riho had a nice rollup counter for a two count. Nyla did a DVD on Riho for a two count. She went up to the top and Riho did what looked like a Northern Lights Suplex from the top. Riho then hit running knees to win the match. Crowd loved this. Probably closer to a 2 1/2 star match, but the live crowd really loved it.

Michael Nakazawa was in the ring to interview Riho in Japanese for the Japanese fans. Rose then attacked him and gave him a powerbomb. She lost him initially, but got him.

Rose was about to toss Riho again, but Kenny Omega saved her.

The match started super hot. Jericho and Omega were in and Jericho caught Omega’s hurricanrana attempt and put him in the Boston Crab. The Bucks broke it up with superkicks. They did dives and Kenny set up the Terminator Dive. Jon Moxley showed up behind him and attacked him. They beat each other up all the way to the back. Somehow, this wasn’t a disqualification. Moxley gave him a Death Rider through a glass table.

It’s now 3 on 2. LAX were dominating until Matt’s comeback. He did three Northern Lights suplexes like the three amigos. On the third, he gave it to both of them. Nick Jackson went crazy on all three and then they set up the Meltzer Driver. Right as Matt jumped, Jericho hit the Codebreaker. They then set up the Judas Effect which looked great for the win.

After the match, Cody ran in. Sammy came in and kicked him low. Then Dustin Rhodes came in. Jack Swagger aka Jake Hager cleaned house and they left the Elite laying.