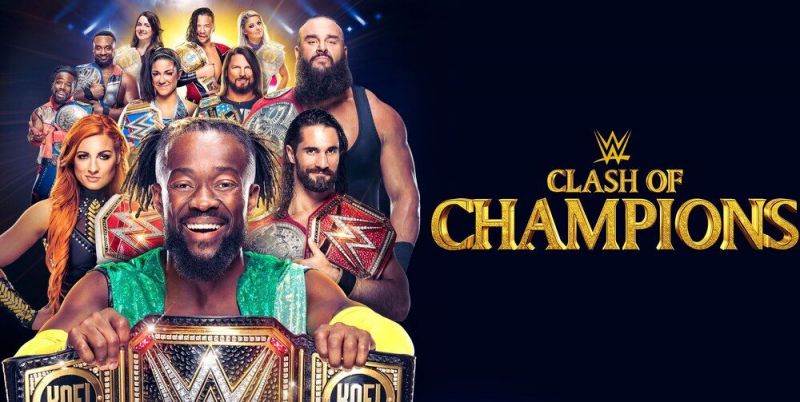 Check out our WWE Clash of Champions live coverage featuring Seth Rollins vs Braun Strowman in the main event.


Clash of Champions is a bit of a mix and match card where nothing truly stands out. Sometimes, that could mean a surprising show. Sometimes, it means a bad show.

We’ll be back with live coverage when the main card starts.

Since they’re probably main eventing the show against each other, Seth and Braun open up against Team Tanning Bed, Roode and Ziggler.

This was super dumb and predictable. Heat was on Seth for most of the match until he finally made the hot tag to Strowman who was trying to run wild, but it was more like walking wild. He tagged Seth back in and was trying to save Seth and shoulder tackled Roode right into Rollins and then Roode hit him with the Glorious DDT. Team Tanning Bed are the new champs.

Charlotte hit the big boot right out of the gate for a two count. Started out nicely. And that was the best part of the match.

Bayley took off the bottom turnbuckle pad and face dropped Charlotte onto the exposed turnbuckle and quickly pinned her. Um.

The Revival Vs New Day

This match was much better. Woods’ knee was damaged and he was wearing a heavy brace. They worked on it for the whole match. Big E took a crazy back bump from the apron to the floor.

They also double teamed him on the outside and gave him the Shatter Machine on the outside. That knocked him out for the rest of the match. Inside the ring, Woods couldn’t fight off the double team and they took his knee out again. He had to eat a Shatter Machine. But rather than pin him, they decided to get him to tap out with the inverted figure four.

R-Truth and Carmela ran into the ring during the match. In the previous interview with Bliss and Deville, Truth had a boom mic because he wanted people to hear second Carmela better. She then used it to tell everyone that Truth was backstage if anyone wanted the 24/7 title. They must not have been watching the show. Anyway, here, Truth ran in and the goofballs chased him. Alexa rolled Truth up for a two-count, but Truth and Carmela got away.

And now, back to this match…

Nikki Cross pretty much won the match by herself. She hit the spinning neck breaker on Mandy Rose and pinned her.

The Miz Vs Shinsuke Nakamura

Sami Zayn came out in a neck brace and tried to cut a money heel manager promo. He didn’t succeed. He had a live mic to start the match and called Miz the king of soft style. Then his mic got cut off.

The Miz played super dumb babyface here because Zayn’s interference was annoying him. He was doing his normal very weak offense. Finally, he got Nakamura in a Figure Four, which you know couldn’t be the finish because of the Revival match. Nakamura reached the ropes. Later, Miz hit the Skull Crushing Finale, though Nakamura was near the ropes. Zayn tried interfering and Miz chased him which led him right into a Nakamura kick and then a Kinshasa when he was back in the ring. Nakamura retains.

Save for the over-acting on the near falls, this was a good match. Both women were working hard and this was the best Sasha match you’ve seen in a while.

Late in the match, Sasha got a chair and threw it in the ring, just so the ref would chase it. Becky came over to her and she got another chair out from under the ring and then slammed Becky in the stomach with it. She got a two count. Becky then got the chair and went to hit Sasha, but Sasha moved out of the way and she clocked the referee.

Then, they decided to brawl all over the arena, only to get back inside the ring where it was stated that Becky was disqualified. This feud must continue. I’m fine with it. Partially because of how bad this show has been so far, this stood out as not-so-bad.

This was a long and deliberate match, made to both think that Orton was the better wrestler, and that by Orton taking so much of the offense, that Kingston was going to come back and win the match.

This was a much better their last match, but that’s not saying much. It reminds me of when Jericho says on his podcast that if you think you’re going slow you should go slower. Orton’s work was good. But he didn’t ever get out of second or third gear. And Kofi just isn’t believable as a championship wrestler at this point.

Orton finally hit the RKO, but Kofi was close to the ropes and broke up the pin. Orton missed the punt and Kofi hit the Trouble In Paradise for the win. The crowd seemed to sit on their hands the entire way and even after it was over.

After watching Becky and Sasha go through the crowd, it’s not like we needed it here, but it is a death feud of sorts. It was also a no DQ match and they used the steps early on as if they created a new match in which you had to use the steel steps.

They went back to the ramp and started using the camera on each other. Roman set up to hit a long sprint spear and instead Luke Harper showed up and booted him. Looks like Big Luke is back. They double teamed Reigns and then Rowan hit his claw slam finisher to win the match.

They started hot, which is good after the two previous matches that were way deliberate. Seth hit a few of his big moves early before Strowman started toss him around. He hit his running shoulder block outside and then tried to do it again, only for Seth to drop down and Strowman went into the announcer’s table.

They fought outside and Rollins tried to superplex him inside the ring. Instead Strowman pushed him off and did a big splash off the top. He nearly fell off before he jumped, but when he did, it was impressive. He then started selling his knee.

He went to the ramp and then was attacked by the Fiend to end the show. It took forever, but to find something I truly liked, but this was good stuff.