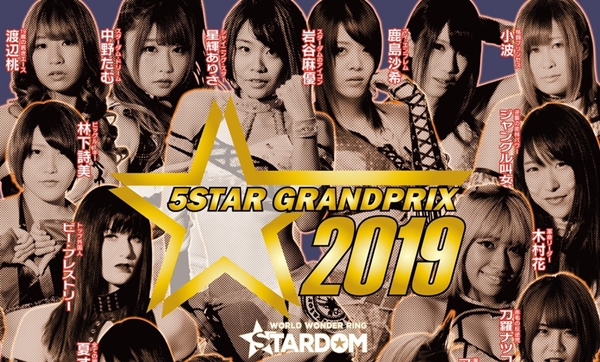 Justin Knipper was at the Stardom 5*Star Grand Prix finals. Here’s his report.

The front hallway Korakuen Hall was packed, mostly with men, before the 11:30AM bell time. I caught some of the rankest odors of the day near the smoking room, some of the worst I’ve encountered after dozens of shows there over the past few years. This was my first Stardom show, and the most male-dominated crowd I’ve been in at the prestigious hall. The reported gate for today’s event was 1080.

This was all fast action but the star of the match felt like Riho, simply, though AZM is on her way to becoming a serious star in the next few years, hopefully on the heel side of things. Riho’s team won.

Sumire is horrible, but has good charisma and easily gets over with this crowd. Her kicks made the Miz look like Ernesto Hoost. Avary was fine but I don’t feel like it’d be fair to criticize her much here because Sumire can’t work. Avary won.

Not so good. Kashima has picked up some steam with the audience this year, more so than ever. Rossy Ogawa is rolling the dice on her. Nakano scored the win in this quick one.

Good match. Hana is the new face of Stardom and as a character, is really coming into her own. She even had a young cosplayer in the crowd; a little girl who came with her mom and put on the same funky pink extensions Kimura wears now.

Hazuki was really impressive and was the one who carried the actual in-ring work. They brawled a bit into the crowd and smashed each other into the East and West signposts, essentially kissing the Blarney Stone of Japanese pro wrestling.

Hazuki’s work has improved so much in the past few years and could be a serious star if Ogawa chooses to push her. It doesn’t look like it’s in the books this year, though, because even though Hazuki went the distance, Kimura won after landing a package piledriver.

Excellent. Iwatani’s form in the ring is close to perfect, from dives to kicks to bridges. You notice her freakish flexibility and body control immediately. She’s also so over with the Stardom fans right now that having her eat a few pins here and there won’t affect her positioning much.

Watanabe carries herself with such maturity despite being only 19. She carries herself like a serious athlete and it makes it so easy to buy in to her matches. And she never looks mentally lost in the match. I sleep on her too much, but this match gave me another reason to pay more attention to her. She’ll be one of the top five female stars in the next five years or less, I’d bet. If you’re a fan of either wrestler, they both showed up tenfold here.

This happened to be an Odeo Tai vs Oedo Tai bout. Natsu Sumire was at ringside for this but ultimately opted to corner Tora here, the much less batty of the two. Andras Miyagi used to be Cassandra in Sendai Girls and, like fellow Oedo Tai member, Kagetsu, is a product of Meiko Satomura. Miyagi’s psycho-heel gimmick isn’t entirely unlike Devil Masami or Dump Matsumoto. Of course, she is an entirely different type of wrestler for a much different era, but that’s clearly who she aims to become, that next new megastar heel on the scene, and she has a much better chance of becoming a star of that nature in the more widely-watched Stardom.

In addition to being the new head coach at the Stardom Dojo in Kinshicho, Kagetsu proved to me that she might be the best all-around wrestler the company has right, from in-ring work to having a fully-formed persona, plus her ability to not just get herself over but elevate others at the same time, like what she did here with Arisa Hoshiki. I’d rank Kagetsu alongside someone like Tessa Blanchard after seeing her carry Hoshiki to such a solid match, without a doubt.

Hoshiki is the company’s most recent golden girl. She’s improved this year because she’s gotten more chances to shine in the spotlight. In the ring she has a natural feel for selling. This match was just that, actually; Kagetsu dominating as Hoshiki mostly fought for her life, desperately avoiding pins and submissions. Some of Hoshiki’s offense had little impact live and felt phony compared to how Kagetsu and some of the other girls were wrestling on the show, like the flying roundhouse kick from the top at the end of the match. Kagetsu used a Death Valley Driver in the last minute but couldn’t make the pin. Expect a White Belt match between these two in the near future.

These two are underrated, and particularly Hayter, and it’s an issue of exposure more than anything. Given the chance, I think she could have a serious heel run in really any company at the moment. She also has size, something not enough of the Stardom girls have at the moment. She wore a shirt that read TOP GAIJIN. When Bea Priestly’s entrance music hit, her and her Oedo Tai buddies at ringside jammed out in a flippant, over-the-top way. It cracked me up.

Bea Priestly is unique. She’s less of a natural than, say, Mayu Iwatani, with the the flexibility and disproportionate strength to her own body, but it’s obvious how hard she works and how serious she takes her work. It shines through when in the ring and how she presents herself, as well as how she conducts herself in promos. At one point in the match, she botched a springboard dive, but in reality it was negligible because both brushed it off and recovered quickly and they never lost the crowd. Priestly won with the Queen’s Landing née Ocean Cyclone Suplex. After the match, she cut a promo saying that she proved that she, in fact, is the ichi-ban gaijin, but after this match, she’d consider Hayter as Stardom’s ni-ban gaijin, second behind Priestly. She then asked Hayter to be here partner in the upcoming October Tag League tournament, which Hayter agreed to. Really looking forward to seeing more of this in the future. 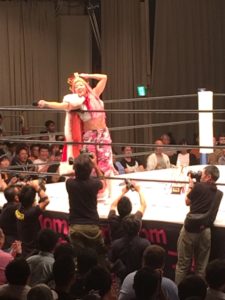 This was not a good match but its story made it passable. Kimura and Konami are in the same unit, Tokyo Cyber Squad, along with Jungle Kyona, who sadly dislocated her shoulder during this year’s tournament. Konami wore Kyona’s sash to the ring. I actually inquired about their stable name and was told that it’s supposed to be that these girls represent the internet generation of joshi wrestlers, with Kimura and company being so popular on Instagram and all. It unfortunately has nothing to do with Super Human Samurai Syber Squad, the only other squad of the same nature in the world that I’m aware of, which I assume was concocted by a serious Matthew Lawrence stan working backstage.

I’m fluffing up this section because, really, there isn’t all that much good to say about this match. Konami is not over, but Hana is, and very much so, as mentioned above. Kimura sold her ass off for Konami, whose offense looked decent throughout, though some of the submissions looked really fake. The finish came out of nowhere got zero reaction because most of the crowd didn’t even realize that Konami had tapped.

Kimura was crowned Queen after the match, and Tam Nakano, Konami and Jamie Hayter were all awarded trophies. Before all of the girls came out and took a picture, Kimura challenged Bea Priestly (or “Bitch” Priestly, as she called her) to a match. Priestly used a few good Japanese phrases which won her even more love from the crowd. Hope the two can tear it up in the near future.

Even though Stardom is the most popular women’s promotion in Japan right now, and possibly the world, they are not even close to the best with regard to action, and that’s how Rossy Ogawa wants it. There’s a reason why the American entertainment aspect of the product is a bigger part of Stardom than the more pure styles we find in Sendai Girls and Seadlinnng. They’ll be a couple stinkers of matches mixed in with pretty high level action, and this show featured matches I’d say that fall in the *** 1/2 to **** range, but in reality, these girls are nowhere near the likes of Meiko Satomura, Yoshiko, Sareee, Nanae Takahashi. Thankfully, Stardom has a handful of serious talents that will likely carry the chosen ones, like Hana Kimura, into the future and into their future, er, stardom.