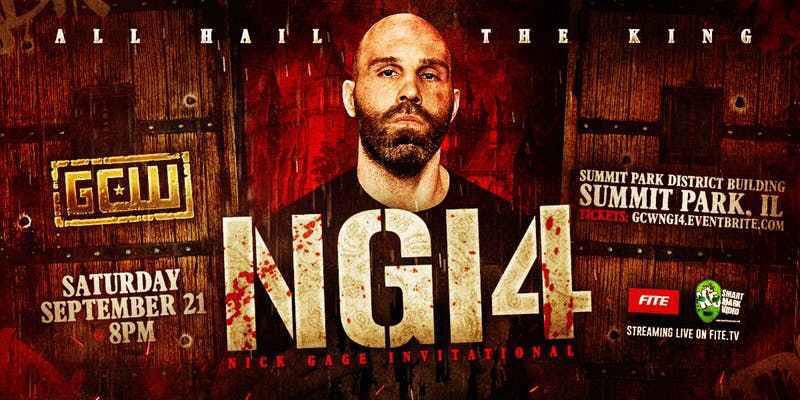 Brady Childs has you covered with Nick Gage’s Invitational – NG14.

Gage introduces the show and informs the crowd that he will be defending his GCW in every match tonight. The way the NGI works is that there are a series of three-way dances with each winner advancing to a final multi-man match.

Justice is good for something stupid in every match so this should be fun. Match kicks off trading light tubes shots and before you know it, Justice takes a backdrop out of the ring through a light tube board. Kody Rice, a large fellow wearing Chippendale suspenders, gets hit with a bundle of tubes when trying for a tope and Gage goes to work outside of the ring. Suddenly, Justice is 25 feet up on the balcony and dives onto a crowd of people. Justice doesn’t need to do the insane things he does, but everyone sure does appreciate it! Action flows back in the ring and Rice tries a senton bomb with light tubes tied up in his suspenders. Gage rolls out of the way and Justice nails a coast to coast. Meanwhile, Gage brings in what I can only describe as a giant hand fan made of light tubes and mashes Justice with it. It was beautiful. A few minutes later, Justice picks up Rice on the apron and dumps up through a light tube board outside with a death valley driver. Gage capitalizes with a cannonball dive from the top rope to the outside. Near falls are traded in the ring before going to the finish. Finish is Gage with a top rope sitout piledriver on Justice, through tubes, on top of Rice. Great opener. Nick Gage advances.

Orin Veidt is a 25-year-old who currently holds the ICW Heavyweight and Alternative championships. Miyamoto is a 36-year-old deathmatch veteran.

Miyamoto is setting up a light tube board outside of the ring. He’s also CHEWING A PIECE OF LIGHT TUBE. It’s true, the Japanese really are better at wrestling than anyone else. Veidt hits Lloyd and Miyamoto with light tube shots.

I want to take the time to say if you haven’t seen Jimmy Lloyd’s match with Masashi Takeda from Spring Break, go out of your way to see it.

Miyamoto goes to the top rope but is thrown by Veidt through his own contraption outside. Lloyd tombstones Veidt onto a light tube for a near fall. AWESOME Canadian Destroyer spot out of a monkey flip counter by Veidt onto Lloyd. Blackout by Veidt onto Miyamoto, but a kick out at one. A sick right hand followed by a rough 450 onto light tubes from Veidt onto Miyamoto but Lloyd breaks up the pin and plants Veidt through a board of knives. Luckily the knives weren’t facing up (yes, Lloyd has done that before albeit with scissors.) Lloyd sets up two chairs and Miyamoto brings in a door. Miyamoto takes out Lloyd with a tube shot, nails Veidt with a bundle of tubes, then hits the over the shoulder piledriver from the top rope through the propped up door. Yuko Miyamoto advances.

Lloyd isn’t anyone’s idea of a crisp wrestler, but he is beloved by the crowd and will do anything to make his match entertaining. Veidt looked good and at 25 has a bright future. I hope to see him back. Everything Miyamoto did looked excellent.

Two sides of the ring are lined with light tubes.

The Mancer just came off of a legitimately very good match and excellent performance with Jerry Lawler at 2 Cups Stuffed. He’s got a chance to be a future star for a big company.

Shlak might have the most unique look in the business. He’s not good, but he does a lot of stupid shit and the fans love him.

Matt Tremont aka “The Bulldozer” is one of the best deathmatch wrestlers to ever live. If you get the chance, find his series with Nick Gage.

To understand GCW deathmatches you need to get that light tube shots are like the hard forearm shots you’ll see in a Japanese match. Once you make that exchange the matches become less bewildering. Anyways, the match begins with a ton of light tube shots and it was awesome. Shlak hits a tope on Mancer, leading to Tremont hitting a MONSTER suicide dive on both men. Child size whiffle bats covered with gusset plates make their first appeance of the night. 2 minutes in and everyone is bleeding. More brawling outside. Tremont throws sound great sounding punches. Shlak runs in with a staple gun! MANCER JUST GOT HIS TONGUE STAPLED! The ref is counting pinfalls on a mat littered with glass shards without any gloves, so props to him. Tremont superplexes Mancer onto a light tube covered Shlak. A door is introduced into the corner, which Tremont is promptly speared through by Shlak, leading to a Mancer/Shlak faceoff that gets roars from the crowd. Shlak brings in a door covered with light tubes and is backdropped into them by Tremont. Finish sees Mancer toss a light tube to Tremont and hit a running knee for the pin. Another awesome match. A bloody Mance celebrates with the people. Mance Warner advances.

Crane came out with a bundle of red light tubes with two balloons and apparently calls himself “The Devil’s Big Red Dick” now? Crowd chanted big red dick along with him!

It took a few minutes for the first insane thing to happen, which is a change of direction. Krane hit a top rope blockbuster onto Colon on the apron and ate shit on the floor. Crane followed with an ocean cyclone suplex onto some tubes. Some dragon suplex light tube spots. Colon botched a code red. Second coast to coast dropkick of the night, this time by Ryan. There was a neat spot where Ryan shot Crane into Colon’s arms, then nailed Colon with a light tube shot, causing Colon to DDT Crane. During a double down Ryan goes to the back and retrieves a weedwhacker with a comically long cartoonishly long cord. Each guy takes their turn holding the weedwhacker before Colon droptoe holds Ryan into the weedwhacker where his finger got caught. Great nearfall after that when Crane hit a snowplow on Ryan. Crane places the big red dick on top of Ryan and Colon and heads to the top rope and hits a splash with a riot board for another near fall. This match is going too long. Crane sets up a door between two chairs and places Ryan on top. He grabs a barbed wire board with light tubes, but the tubes start falling off before he can place it on Ryan. Sets Colon on the top rope and goes for a frankensteiner, but Colon stops him and hits a middle rope Styles clash onto Ryan and through the barbed wire tube board for the pin. There was a lot of insane stuff in this match, making it fun and crazy, but it wasn’t particularly good. Alex Colon advances.

Alex Zayn vs. Blake Christian vs. Gringo Loco vs. vs. Jake Lander

Blake Christian is fresh off an appearance at PWG’s BOLA. Last time Gringo Loco was in GCW he was apart of an unreal six-man tag featuring Laredo Kid and others at 2 Cups Stuffed. I can’t do this justice. This was an outstanding display of athleticism and moves, even if some of it missed. We saw
Alex Zayn hits an insane dive over the post onto Lander and Gringo, a Golden Triangle moonsault from Lander. Lander scaled the backs of Christian and Zayne and tried a Frankensteiner but was powerbombed by Loco who followed up with a splitlegged moonsault. I lost track around here so I’ll attach .gifs later. Lander just did a hurricanrana over the ropes and he’s got some HOPS. CHRISTIAN HIT A SPRINGBOARD 630 TO THE OUTSIDE. Alex Zayne wins with his move, the Taco Driver. Outstanding display of cool shit. Alex Zayne wins.

Tracy came out before the match and cut a promo where he turned heel and babyface about three times. He managed to drop an f-bomb in there, too. Crowd didn’t like that! Tracy is working the match on his knees. They’ve done about two lock-up spots and a bunch of stalling. Smothers is cutting another promo and the crowd is telling him to shut the fuck up. This isn’t good heat like the Lawler heat. Smothers challenges Marko to a “dance-off to the death” and I want to die. I’m trying to decide if this is the worst match of the year, either this or the penis druid match with Joey Ryan and Val Venis from Mania weekend. Smothers cheapshots Marko for the heat. Southern wrestling is a disease. Marko wins with a schoolboy. This was fucking awful all around. Marko Stunt wins.

The ropes are coated with light tubes all around. Light tube bundles are under each turnbuckle and a White Claw board has made its first appearance.

Gage/Colon and Miyamoto/Mancer pair off. Colon eats a Nick Gage spinebuster onto the White Claw board. Miyamoto joins in with a moonsault onto Colon. Mancer does an outstanding job of selling in these matches. He doesn’t half-ass anything. Miyamoto thrashes Colon with a knees-first standing moonsault with an assist from a bundle of tubes. Big square off with the large light tube bundles. Everyone eats a tube. Human centipede spot but with sleeper holds. Mancer gets his turn to run wild hitting a series of bionic elbows. Miyamoto with an insane back handspring corkscrew kick. He’s remarkably athletic. Gage piledrives Mancer through a door that was on top of Colon from the top rope to win the 4th Nick Gage Invitational and remain the champ. Match was fun for the time it lasted. Finish was sudden and flat. Gage wins.

A man in a black hoodie and bandana covering up his face does a run-in, smashes Gage with a huge bundle of tubes, hits Gage with a choke breaker, and pulls his bandana down to reveal himself as RICKY SHANE PAGE. He spraypaints the belt and walks off with it. RSP has appeared in GCW once, for the Clusterfuck during Mania weekend of 2018, but for all intents and purposes, this is his debut.

This show was alright. I’d go thumbs in the middle. The Tracy Smothers stuff smashed the breaks on what had been an enjoyable show. Smothers really shouldn’t be brought back. Even if you take away the homophobia his match was excruciating to sit through. The show got off to a hot start and carried through until intermission. The lucha style four-way got the crowd to pick up where they left off before the Smothers stuff ruined all momentum.