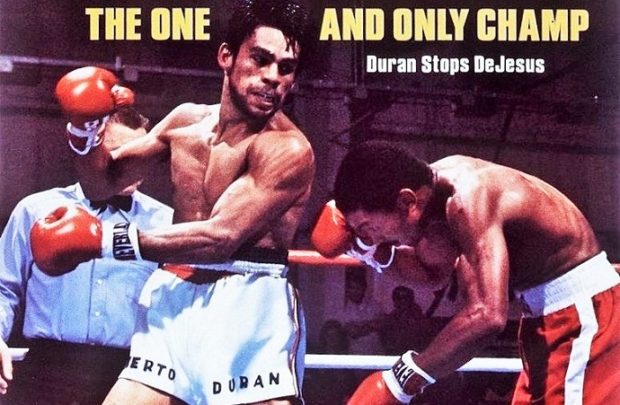 The history of the lightweight division, while not as talent laden as the welterweight and middleweight divisions, does possess a top-tier of fighters on the same level. The top four 135-pound fighters of all-time, like its 147-pound and 160-pound brethren, have an argument to be included in the 10 greatest fighters of all-time. Benny Leonard is arguably the greatest Jewish fighter of all-time. Joe Gans was the first major African American sports star. Pernell Whitaker is on the short list of both the greatest southpaw and defensive fighter of all-time. All three aforementioned fighters were incredible craftsmen in the ring. The one thing separating them from the greatest lightweight of all-time was that man’s incredible ferociousness inside the ring. That man was Roberto Duran.

In the history of boxing, there was never a fighter who combined ring IQ, fearlessness, technical skill and savagery better than the Panamanian legend Roberto Duran. Duran, like the vast majority of great fighters, grew up in impoverished conditions. As an adolescent, he engaged in street fights with grown men on the streets of Panama City for meager change. This led to Duran turning pro after only 32 amateur fights at the tender age of 16. With the guidance of wealthy Panamanian millionaire Carlos Eleta as his manager, Duran’s hunger and savagery inside the ring saw him destroy everyone thrown at him in Panama. Eleta then brought “Manos de Piedra” to the United States and in his 25th fight, Duran destroyed lightweight contender Benny Huertas in only 66 seconds. This fight took place in the hallowed Madison Square Garden and immediately Duran caught the eyes of boxing fans and the media. Around this time, Duran hooked up with two trainers who would refine his skill, Ray Arcel and Freddie Brown. They would bring both discipline and fatherly figures; two huge gaps in the then 20-year old Panamanian dynamo’s life. It would all come to fruition on June 26. 1972, just 10 days after Duran’s 21st birthday.

My father, who recently had been released from prison, was among the over 18,000 fans in a sold out Madison Square Garden to see the undefeated Panamanian juggernaut attempt to wrest the WBA Lightweight title from the great Scottish Champion, Ken Buchanan. Buchanan has defeated Duran’s idol, Ismael Laguna, the same night Duran destroyed Huertas to become champion. I was four years old at the time and all my father talked about the weeks leading up to the fight was that Duran was going to be the next great Latin superstar. Duran knocked Buchanan down seconds into the first round and was breaking Buchanan down when late in the 13th round, Duran landed a vicious low blow that could’ve substituted for a vasectomy. Buchanan couldn’t continue and because the referee did not call the low blow a flagrant foul, Duran was awarded the fight and the title. It was the beginning of the most dominant reign in the history of the 135-pound division.

After losing his first fight, a non-title fight at 140-pounds against the excellent Puerto Rican fighter Esteban Dejesus, Duran successfully defended his title three times in 1973, all by knockout. Then, on March 16, 1974, Duran gained revenge for his only loss by beating Dejesus in Panama City. Duran, like in their first fight, was hurt and knocked down in the first round. This time, however, Duran was able to finally break down Dejesus and knock him out in the 11th round.

Duran’s biggest problems were always with boxers who had lots of foot movement. However, in the era of the 15-round title fight, Duran’s ability to cut off the ring and wear his opponents down with hellacious body punching was the reason he would always get the best out of these fighters. On March 2, 1975, again in Panama City, Duran faced such a fighter in Ray Lampkin. Over the first 10 rounds, Lampkin’s constant movement was frustrating Duran. Duran, however, never strayed away from going to the body, broke down Lampkin leading to Lampkin sucking air late in the fight. Finally, in the 14th round, Duran landed a left hook to the body and head combination that put Lampkin to sleep. Lampkin was still lying prone on the canvas while Duran was being interviewed. Duran’s remarks were as savage as the knockout, as he claimed he wasn’t in tip top shape and if he had trained, he would’ve killed Lampkin. It was this show of machismo that made Duran a huge favorite among Latin fans throughout the world. This would also be the case when he fought other Latin fighters. Didn’t matter if they were Dominican, Puerto Rican or Mexican, Duran received the overwhelming cheers and support.

After successfully defending against two excellent but light hitting fighters in the Dominican Vilomar Fernandez and the Puerto Rican Edwin Viruet in 1977, Duran was increasingly having problems making 135 pounds. He had an extreme bad habit of gaining 50-60 pounds between fights due to excessive eating and partying. Duran decided to fight one more time in an attempt to become the Undisputed Lightweight Champion of the world. That fight occurred in Las Vegas on January 21, 1978 against the WBC Champion and the only man to ever defeat him, Esteban Dejesus.

Unlike their first two meetings, Dejesus decided to stand and slug with Duran. There has never been a lightweight in existence who could defeat Duran in a slugfest. Duran battered Dejesus for 12 rounds before Dejesus’s corner threw in the towel after Duran dropped him twice. Just a few months later, Duran vacated both belts, ending the greatest reign in lightweight history.