Justin Knipper is in Japan and here’s his live report on the latest Gatoh Move Pro Wrestling show from Ichigaya Chocolate Square.


Ichigaya Chocolate Square is the world’s smallest pro wrestling venue. It’s also the place Emi Sakura and the rest of Gatoh Move call home-base. To call it “small” is an understatement and then some; it looked like a gutted-out office on the ground floor of a bigger shared building. It’s ideal for cooler summer days like today, with open windows, and its location allows stragglers from off-the-street to peak their heads in and catch a glimpse of what’s happening — the best kind of PR for such a unique company. I counted roughly 40 paid heads inside the venue for today’s show, and around 60 including staff and walk-ups later on.

Sakura started Gatoh Move seven years ago, and since then has become fertile ground for some of today’s top female wrestlers like AEW’s Riho and Hikaru Shida. Sakura started her career with IWA Japan, which at the time was mainly male wrestlers with an emphasis on death matches. From there she moved to FMW and later Ice Ribbon, among others, before starting Gatoh Move.

At the top of the show, Sakura greeted everyone in both Japanese and English (by the end of the show there were about four English-speakers in attendance, including myself). This was less a generic ring introduction and more similar to a monologue; a performance in itself, almost. She ran down the card and filled everyone in on what’s been happening with GTM recently.

After this, Sakura invited the main Japanese roster out to do a song about eating whatever you want called “My Cheat Day” which contained this lyric: “Fried chicken? OK!” This was the real deal, too, with choreographed dance moves and everything. To most Western fans, this would be considered out of place or just too foreign an idea for some to handle, but we have to understand how closely tied music and joshi pro wrestling are, dating all the way back to AJW pioneer wrestler and idol, Jackie Sato.

Mei Sugura, GTM’s new 20-year-old ace then did a terrific introduction in both English and Japanese. She has zero stage-fright and her energy was infectious, which set the tone for the rest of today’s matinee show. After this, they brought the rest of today’s wrestlers into the venue and the audience was quickly introduced to them before the card kicked off. 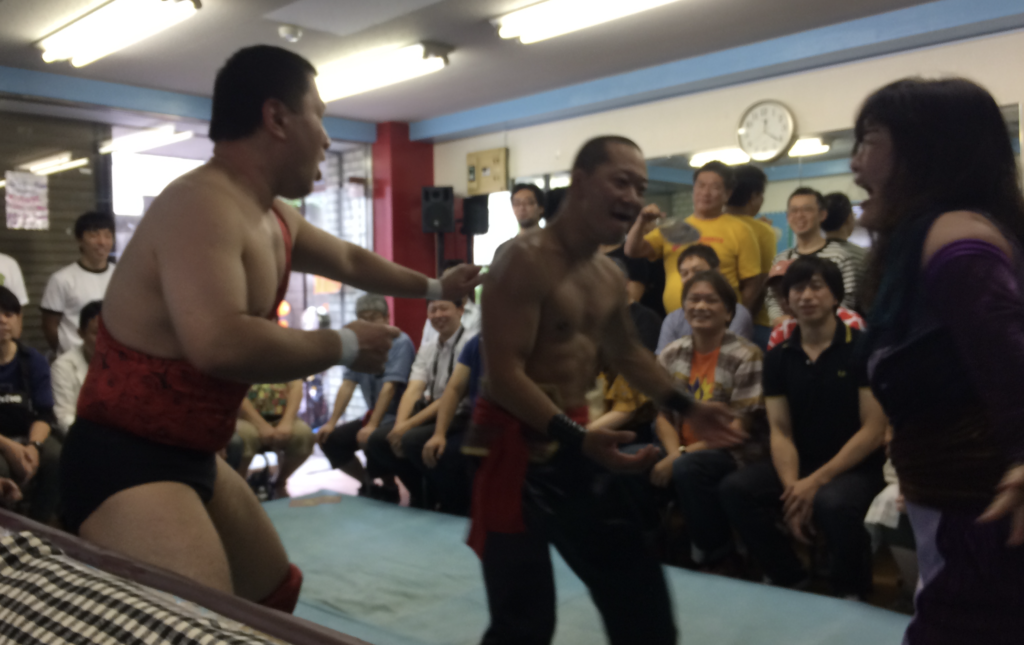 After the monologue and performance, Sakura reappeared from nowhere in her ring gear ready for today’s match with Antonio Honda (DDT) and Choun Shiryu, who does a Chinese martial arts-type gimmick.

This was excellent, creative and at times, very funny. Performing in such a smaller venue sometimes makes for awkward silences and uncomfortable moments after (like say, a botched move), but this didn’t happen once during the show. Today’s ring looked more like a giant futon than anything, and because of how talented everyone here is, it didn’t really matter. It wasn’t an issue; if anything, it was a benefit that forced the wrestlers to think on their feet, improvise, and to constantly think about safety with fans so close to the “ring.” This match was a great example of that.

All three locked up from the start. Yes, a triangle-lockup. There were a lot of nice spins on three-way spots in this. Some were funnier, like when Honda did a triple arm-ringer but ended up being the one getting slammed at the end. And sometimes the other spots were just flat-out cool, like when Sakura had both Honda and Shiryu sitting upright against the wall of the venue and she dove right into them with a low-angle crossbody.

Later, Honda shouted “Ahh, GIVE UP!” and the referee was about to ring the bell when he then said “Mistake!” He then stopped the match because he had to tell a story, and after that, he’d give up. This is what he’s famous for, and English-speakers got a taste of his fox story spot earlier this year at Joey Ryan’s Penis Party. He told it in English today, and it was about a little fox who went to a Gatoh Move show. He kept saying “Gatoh Move” and eventually morphed into “Got to move” and had everyone chanting the latter until he poked Sakura in the eyes. Shiryu blocked the fox eye poke attempt with some flashy defense. In the end, Emi Sakura won with a la magistral cradle on Honda.

SAKI often competes for Actwres girl’Z, another newer joshi company with an emphasis on females with backgrounds in acting. Mizunori hasn’t even been wrestling for two years and is one of bright new GTM rookies with tons of talent and charisma. Konno, another GTM regular, had lost her voice and wasn’t able to make much sound, though she tried her best. She even apologized to the crowd for it.

To go off on a brief tangent here: Every wrestler I saw today screamed, gasped and grunted during their matches, something that easily kills any aforementioned awkward silences. There is not enough grunting in wrestling anymore.

Back on Konno — with or without her voice, she was all energy in this, and acted as Crystal’s mentor here with the two hashing out who’d start the match first before things got going. This was my first time seeing Crystal, whom I was told is a pretty big deal in her home country of the Phillipines. She was invited by WWE to tryout for the company Shanghai, and at one point was slated for last year’s Mae Young Classic before WWE changed their plans. She’s a natural athlete being a former swimmer, cheerleader and black belt in Taekwondo. Her appearance is striking, and her skill is above average for not having wrestled for too long, the benefit of a life dedicated to sport.

This match spilled over the windowless window sill I was sitting behind and onto to floor and sill at the top of the match. Again, it was all action, like the first match, but now with four young, hungry wrestlers, so the intensity level was even higher here. It was another creative match with tons of modern takes on llaves submssions. After about 15 minutes the champions retained after Mizunori landed a one-footed springboard splash off the wall for the pin. 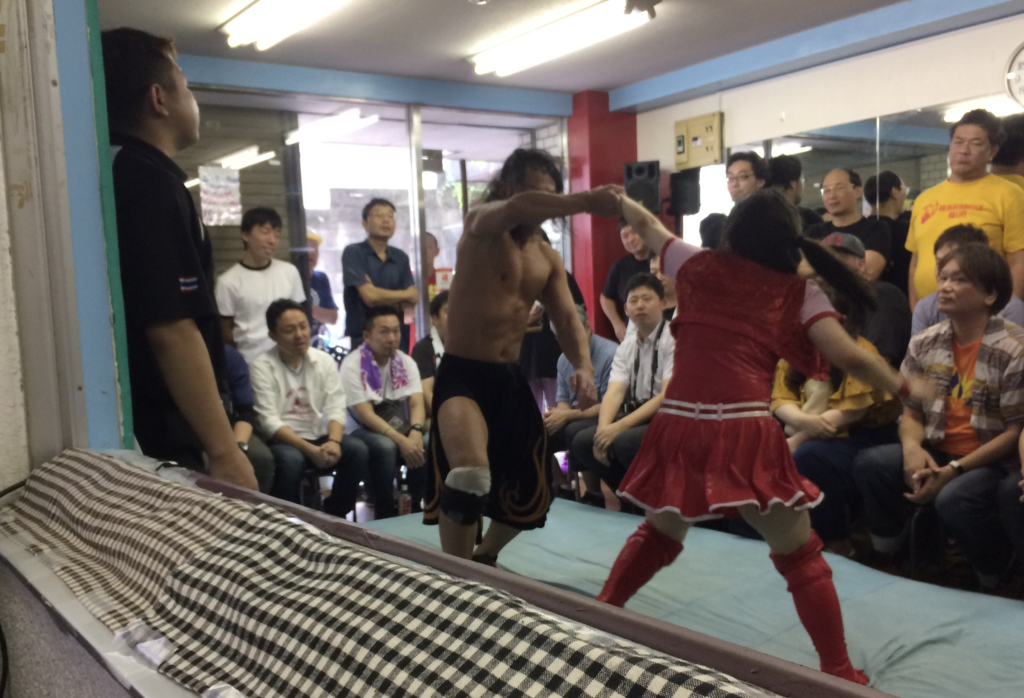 Sugura is only 20-years-old and has only been wrestling a year, which is really mind-blowing after seeing her wrestle. I don’t know how to articulate it exactly but it falls in line with the “it-factor” theory. She just has “it.”

Takanashi is actually one of Japan’s most popular wrestlers, even ranking in the top 10 in Numbers magazine’s annual survey of most popular Japanese wrestlers. He’s been a regular guest of Gatoh Move for years and really knows how to work with smaller females without sacrificing any of his credibility (under the assumption that you’re not an asshole and the idea of an intergender match didn’t sacrifice his credibility already).

The two started slow and serious. No one made a sound, and no, it wasn’t awkward. Imagine that. People studied every move, every transition, and because of how serious both Takanashi and Sugura took it, the crowd did as well.

Takanashi was genius here, despite being a fully grown male wrestler taking on a girl who could easily pass for a junior high school student. He treated this like a serious match even though on the surface it’s ridiculous. It didn’t feel that way, though. Sugura was impressive with her more World of Sport-style wrist-work and general escapism. She did a flying arm drag off a window sill at one point, but Takanishi would often put a quick halt to all Lucha things. He worked over her knees with a few submissions that later led to a loud “woo!” and a figure four leg lock. Sugura eventually launched herself in my direction and grabbed my hand for a rope break. I just shook her hand and said, “Nice to meet you,” in Japanese while she screamed “BREAK!” in English. She later did 15 dropkicks and did a big bodyslam on Takanishi for two. That looked unreal because of the size of the two and how smooth it looked. It looked like she really picked him up and slammed him (this 5’2″ young woman) but in the end she wasn’t able to put Takanishi away completely.

Today’s roster came back into (onto?) the ring and sat with the audience for a post-show recap, dojo style. Everyone said a few words about their matches and what they learned from them today, and Emi Sakura announced their upcoming shows.

A few of the girls did a closing song and then went to the back. The rest of the girls came out and served the audience tea and everyone said “Cheers!” in English. Then, before the end, the roster came out and sang “Happy Birthday” to Takanashi as it was his birthday.

It was 90 minutes of all action and feel-good entertainment with top-notch wrestling. Style-wise, this was a great example of how to work in front of a small live crowd and still come off novel and professional. It’s the total opposite of “working for the camera” and felt more like they were trying to give something to us, the live audience.

I urge anyone in Tokyo to visit Ichigaya Chocolate Square at least once if they can. I can’t compare the experience to anything. It was excellently programed and everyone is technically proficient. Being able to be so close to the action and in an intimate environment is something that is hard to replicate. Be on the lookout for some of these names in the future, particularly Mei Sugura.