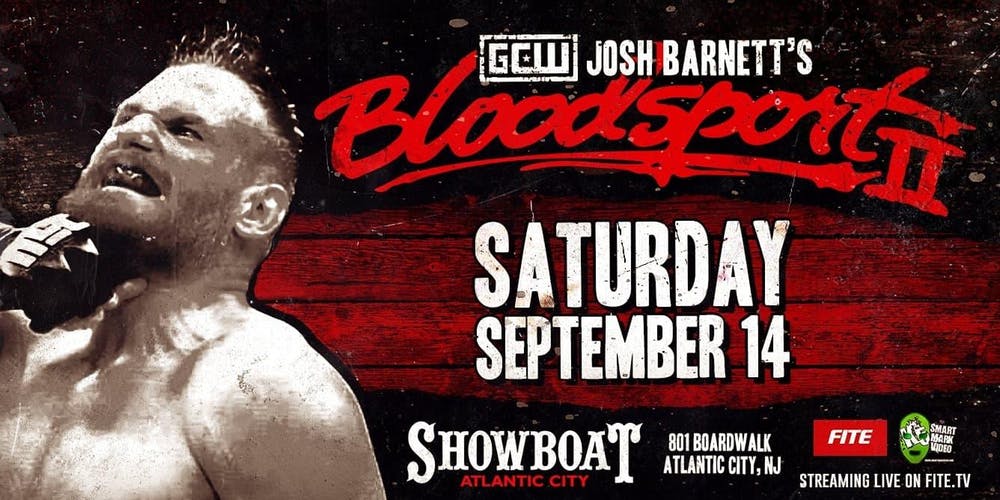 Brady Childs has you covered for your Bloodsport 2 live coverage.

Pre-show began with a couple of video packages, including an outstanding one featuring Chris Dickinson overlayed by a cover of “Creep” by the women’s choir Scala & Kolacny Brothers.

Makowkski threw some nice kicks early on. Good transition from a triangle to an armbar that Gulak escaped followed by a hard German. Makowkski did a sloppy standing moonsault followed by an O’Connor roll into a Chaos Theory armbar. Gulak escaped and landed a hard right but is put down by a right. Makowkski wins via KO.

Sakai is fighting barefoot. Snow threw a mean suplex. This is not good. Very soft. Snow powered out of a guillotine and hit a brainbuster, follows up with a kneebar, but Sakai escapes and throws a hip toss into a straight armbar. Snow stacks her up, but Sakai keeps it locked and gets the tap out. Final 2 minutes were alright. Sakai wins via submission.

Match begins with a Masvidal spot as Wentz hits a running knee immediately. Henry hits a big German soon afterward. Some great scrambles that culminated in a double ankle lock spot. Big T-bone suplex from Henry, sick pop-up reversal from Wentz to get back control and lock in a rear-naked choke. Henry counters a standing guillotine into a northern lights suplex and floats over for an armbar. High kick from Wentz wobbles Henry and he takes advantage with knees to the ribs. HUGE right hand from Wentz grounds Henry but Wentz is too eager and gets caught in a mounted triangle/kimura combination and gets the win. Short, but worth watching. Anthony Henry wins via submission.

Kratos gets Hammer off his back with a slam. Kratos with an impressive cartwheel guard pass. Hammer works the Minoru Suzuki front kneebar before Kratos escapes. BIG strike battle. Kratos throws BOMBS. Hammer gets his back and hits a big release German, rushing back to re-gain the waist lock. Kratos works his way up and hits a huge, towering suplex to escape trouble. Hammer gets his back but can’t sink in a rear-naked choke, transitions to an armbar attempt. Hammer hits some knees and gets Kratos up in powerslam position, but Kratos slips out and lands his back. Hits a snap suplex into a guillotine that Hammer powers out of and locks in a bully choke for the win. Very enjoyable. Hammer wins via submission.

Kay tried multiple imanari rolls to varying degrees of sucess. We got another double ankle lock spot complete with strike exchange. The second imanari roll attempt saw both competitors crash to the outside. Kay with a takedown, moving into side control. Savoy navigates back into the guard. Savoy stop the third imanari roll attempt and barraged her with strikes. Kay with another takedown and lands the mount. Savoy tries a kimura from the bottom but ends up giving Kay the mount. After some wrestling, both women stand up and Savoy lands a saito suplex, sending her outside. Savoy with a butterfly suplex on Kay as she re-enters the ring and it to an armbar. Kay rolls into a crucifix and lands elbows until the ref stoppage. Slow, not as crisp, some of the strikes missed, but fun! Kay wins via TKO.

Grimm is the first out-and-out heel of the show. Sternum notch takedown from Carelli. Lots of big elbows from the top from both men. Some LOUD leg kicks and a big leg trip takedown from Carelli. These men are the second to roll outside during a match. Grimm hit a Garvin stomp but Carelli worked out of it and submitted Grimm with a sick armbar. Carelli should get more prominent US work as a serious guy after this match. Good! Carelli wins via submission.

This was a Tim Thatcher match. Very physical, lots of work on the mat. Best match since the opener. Minowa did the rolling koppo kick that he beat Cro Cop that Thatcher sold well. Minowa put on an armbar but Thatcher escaped, got his back, beat the shit out of him with forearms, then applied a neck crank for the submission. Minowa was no slouch in this, either. I’d love to see him back. Good match. Thatcher wins via submission.

First match back from intermission. Very well-paced match. A lot of pro wrestling spots that flowed seamlessly. First big spot of the match is DBS hitting the powerslam on Tom. It’s impossible to watch DBS now and not think he was badly misused in New Japan. Big German from DBS, maintains the waist lock, but Tom counters out. DBS tries a sharpshooter, but couldn’t get it. Tom destroys DBS with a sliding lariat for his trouble. Awesome combo from Tom fires up DBS who lays in some hard forearms. DBS drops Tom on his head with a Saito suplex, picks Tom up again for a HUGE sit-out powerbomb, knocking him out. Damn good match, match of the night so far. Davey Boy Smith Jr. wins via knockout.

Wild start. Tons of action. Lots of hard strikes, intense grappling. Gage got a superstar reaction coming out. Match only lasted about 4-5 minutes. End of the match saw Kross get Gage in a blood choke that was ended via ref stoppage. Crowd was furious. Immediately after Kross was announced the winner, Gage threw the ref out of the ring. This was very heated and sets up Kross for a GCW title match against Gage, which should be fantastic. Killer Kross earnestly called out Dave Bautista in a post-match promo. Go watch this. Killer Kross wins via ref stoppage.

The Dirty Daddy has a big set of shoes to fill, but he’s going to make this work. Some good scrambles that see Barnett put Dickinson in an anaconda choke. Dickinson nails Barnett square in the head with a knee strike to escape, working on a guillotine. Barnett being very aggressive when he gets the chance, raining forearms and elbows. Barnett tries powers out of a guillotine, crumbles down, but gains the mount. Dickinson finds a kimura, Barnett rolls out and gets the mount and lands some palm strikes from the top before rolling into an armbar attempt near the open apron. Dickinson rolls into side control but decides to stand up. Dickinson attempts a spin kick, stumbles a bit, allowing Barnett to land a double leg. Barnett gets Dickinson for a butterfly throw. Dickinson rolls over into the half guard and barrages Barnett with heavy strikes. Barnett does the same and rolls into a front kneebar. Barnett lands a head and arm throw but Dickinson traps him in a head scissors before going to work on the ribs. Lots of rib work, hard strikes so far. Barnett rips the tape off and we’re back to stand-up. Dickinson catches Barnett flush and knocks him down and delivers a SICK deadlift German. Barnett fights back with a sick gut-wrench suplex, strikes, and nails Dickinson with a head kick as he’s kneeling on the ground. A bit anti-climatic as I was expecting this to go longer, but an awesome match. I’d call it the second-best match of the show. Josh Barnett wins via knockout. Dickinson cut a promo after the show putting over Barnett as one of his childhood heroes. Barnett took the mic, put over Dickinson, told the crowd that he and Moxley will have their match and that if the office tries to put the kibosh on it, to let them know they want to see it. Barnett proceeded to give his own post-fight interview as if this were a shoot and it was as awesome as it sounds.

Final three matches saved the show. Not that the first half was terrible, but nothing really stood out aside from Anthony Henry in the opener. The positives of the first half of the card is that everything is kept below eight minutes at the most. If something’s not great, it’s over fairly quickly. Thumbs in the middle from me.

The big standouts for me were Anthony Henry, Anthony Carelli, and Davey Boy Smith Jr. Here’s to hoping Carelli starts getting regular work stateside because the scene could use another guy like him. The matches I’d check out are Anthony Henry vs. Zachary Wentz, Davey Boy Smith Jr. vs. Tom Lawler, Nick Gage vs. Killer Kross, and Josh Barnett vs. Chris Dickinson. It might sound like a lot, but Henry/Wentz and Gage/Kross together aren’t as long as Barnett/Dickinson, which was about fifteen minutes.