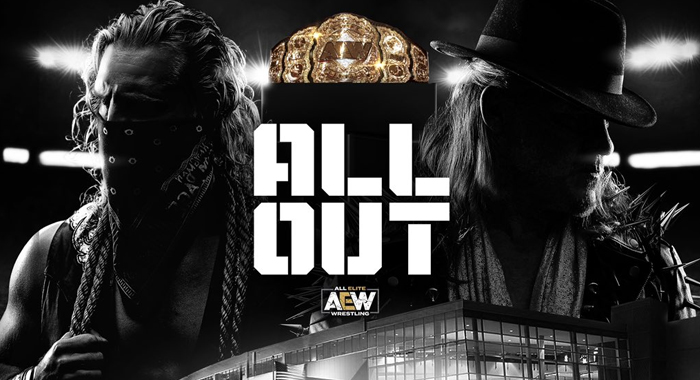 
Earlier today, WWE had their NXT UK TakeOver card and New Japan was in London for Royal Quest. AEW ends the night with their big PPV which is four weeks before their TV debut on TNT.

We’ll be back with the Buy In hour, which precedes the main PPV show.

The first five women in the ring are Nyla Rose, Leva Bates, Faby Apache, Priscilla Kelly, and someone else whose name I didn’t get. Basically, Nyla dumped them all out. Bates was tossed out but used books thanks

Tenille Dashwood is in. So is Awesome Kong and Brandi Rhodes. I think Ivellise and Bea Priestley at some point too. Allie, Nicole Savoy, Teal Piper, and ODB are out next. And a bald Jazz.

They set up Nyla Rose and Amazing Kong to lockup. Jazz broke it up. For some reason, Kong was dumped out. Mercedes Martinez is the joker.

Nyla Rose, Britt Baker, and Bea Priestley are remaining. Martinez got dumped to make it three.

The match so far has been an absolute mess. Mistimed spots, questionable ways of eliminating some of the talent, and almost zero focus on the women that your average wrestling fan won’t know.

Britt Baker dumped Bea Priestley. Bea was upset and went to grab Baker and Nyla dumped her to win. I didn’t like that finish. Fine with Rose winning through.

Lots of goofy stuff that doesn’t matter in this match, but it’s still okay. Private Party is going to be a good team when they don’t have to memorize the entire match.

Quen hit a sweet shooting star press. One of the prettiest ones you’ll see. Quen then went hurricanrana crazy, hitting one on Angelico which led to a RKO from Kassidy, which they call the Gin & Juice. Angelico’s shoulder was up.

Angelico and Evans jumped Private Party after the match was over.

Wardlow is coming, per a pretty sweet video package.

MJF said that he doesn’t have a match because he doesn’t want a match and instead wants to be in Cody’s corner.

The match is fun for what it was. SCU won after hitting the BME on both Stunt and Jungleboy at the same time. Luchasauras was over huge.

SCU made the match. They had heat on Jungleboy early on. Babyfaces got the shine and Luchasauras was killing everyone, though in slow motion.

Jungleboy and Luchasauras pitched Stunt onto Kazarian and Jungleboy spun him around so it was like a whirling DDT. But Luchasauras didn’t protect the fall and they kicked out.

Omega looks purposely a step behind Pac. The match took a little while to get going, but it probably feels that way because there was so much heat behind Omega’s match with Jon Moxley and this is just a regular match early on in the show.

They started to pick up. Both guys did dives; Omega doing a flip and Pac doing a moonsault. Both hit their legs on the barricade. Pac hit a sweet 450 off the top rope for a two count.

Omega hit a V-trigger and then went for the One Winged Angel. Pac didn’t let him get it but instead, Omega turned it into a German. Pac hit a strongman German of his own.

It got a little rough as they got near the finish, but the end was excellent. Omega went for the One Winged Angel and Pac turned it into a sleeper called the Brutalizer. Crowd was pretty shocked that Omega lost.

They taped up Havoc to a chair and dropped thumb tacks in his mouth and taped it shut. The match was insane.

We saw:
– A staple gun to a forehead
– A paper cut to between the fingers and to the sides of the mouth
– Janela hitting an Emerald Frosien on the ring apron
– A brainbuster on a chair
– A moonsault to the floor where someone moved out of the way
– An ollie on a skateboard with tacks on the bottom on another’s back
– A coffin drop onto the steps with a barrel on his back
– A clothesline onto a barrel

The Dark Order won with the Fatality which was a pretty sweet move. Otherwise, the match was pretty forgettable. It’s hard to critique the match after seeing 27 car crashes. Crowd was way down. The Best Friends’ act works, but you just got the feeling that Dark Order was winning no matter what and the crowd had that figured out too and no one cared.

Orange Cassidy came out after the lights went out and did a dive through the ropes. He kind of stole whatever Dark Order got out of the win live.

The psychology of this match was cool. Riho was the smallest dog in the fight. Shida did everything she possibly could to put Riho away, but Riho never died. She used every possible type of rollup to beat Shida and finally pinned her with a creative rollup. This match was good.

Tully Blanchard is in Spears’ corner. MJF is in Cody’s corner.

Cody jumped Spears before the bell doing a tope onto him. Tully even took a bump.

Cody is treating this as a fight while Tully and Spears are trying to gain every advantage possible by cheating. The heat is great for this one. Spears was going to use Cody’s weight belt to whip him and he got Earl to take it away from him. And when Earl took it away, Tully gave him his belt to whip Cody. He whipped him once and then kept it even though Earl saw him. If there was ever a time for the ref bump…

Cody powered up like Hulk Hogan in his prime and fought through the belt whip. Cody hit the Cross Rhodes, but Tully had the ref.

MJF and Tully squared off and Spears knocked MJF out with a kick. Arn Anderson came out and hit Spears with a spinebuster.

Cody had a chair and was going to hit Spears with it, but threw it down to hit him with some Dusty punches and elbows. He tossed the chair to Spears and then hit the Beautiful Disaster kick and then the Cross Rhodes to win.

MJF had a chair after the match to tease hitting Cody, but threw it down and they hugged.

The Lucha Brothers Vs The Young Bucks

As expected, this was a very well put together ladder match. Fenix’s leg seemed to be okay. He did a slingblade from one side of the ladder to the other. I’ve never seen that. He also did a Canadian Destroyer on Matt underneath the ladder.

Pentagon hit a Canadian Destroyer on Matt from the top of a ladder and through the table. Fenix and Nick were both perched on top of the ladder and dove onto the other guys who were on tables and on the outside.

Pentagon tossed Nick off the ladder and through a table and Nick nearly killed himself. He cut his hand. Matt unmasked Pentagon and then Penta dumped him off the chair and he fell straight down. The Lucha Bros did a package piledriver onto a ladder perched between the apron and the barricade. That has to be it. And it is. The Lucha Bros keep their titles.

They were attacked by two guys in rubber masks. Nick Jackson was beat up too. They unmasked and it was LAX. Looks like they’ll be Jericho’s tag partners for the first TV.

Page feels big time here. He came out on a horse. His confidence is way up. I don’t know if Page is winning this match, but it feels like Jericho is looking to make a guy tonight.

Page went for the shooting star off the apron to the floor on Jericho, but got hit with the Codebreaker. The match is a bit slower than I’d like. Page has already powered up twice. Jericho is bleeding thanks to an elbow. Page hit a swinging neck breaker off the top rope.