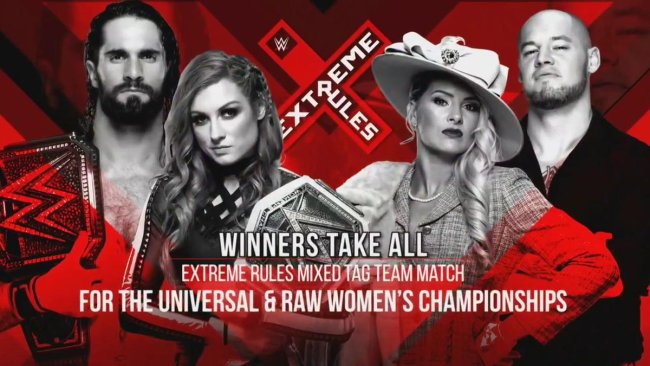 As you’d expect, a lot of Roman selling and doing most of the wrestling. Shane’s wearing some Jordan 33 SE’s. Taker got a tag in and had some nice back and forth with McIntyre, taking the clothesline over the top rope while landing on his feet.

Elias interfered. Roman was sent over the barricade with a Claymore Kick. They triple teamed Taker. Shane hit the elbow from the top rope to the outside and through the table. He then did the Coast-to-Coast on him while Taker was holding the garbage can.

Reigns came back. Taker gave Elias and Shane chokeslams. Drew was about to take out Taker, but Reigns speared him. Taker then gave Shane the Tombstone. This was totally fine and good for what it was supposed to be.

The Revival Vs The Usos

Very rarely do I saw this when I watch wrestling, but I really wish this match was five minutes longer. These two teams have really good chemistry together. The Usos continue to be (to me at least) the most underrated tag team out there.

They lost clean here as the Revival hit the Shatter Machine. Would love to see these guys take it to the next show and really get time.

Helluva way for Black to re-debut. He kicked Cesaro for real (at least it looked like it) with the Black Mass to get the pin.

This match was different from your normal WWE match. Lots of stiff looking striking and really good wrestling. Just let these guys wrestle on the next couple PPVs too.

Bayley won after she got her knees up on Bliss’ Twisted Bliss. Then Cross tagged in and Bayley booted her. She then got up on the top rope to hit the Macho Man elbow on Cross to win the match.

It was fun for what it was and was put together smartly. Nothing really wrong with it.

Lots of super fun big guy stuff that looked brutal. Braun did a couple of shoulder block tackles that would’ve looked rough with football pads on. Lashley hit a couple of spears, one through the barricade. He hopped on top of the barricade, but then into a hip toss onto the announcers. Strowman powerslammed him off the risers part of the arena and through a floor. They both nearly took the 10 count for the Last Man Standing stip, but like the Kool-Aid man, Strowman got up and broke to win.

Strowman should’ve busted through like the Shockmaster to win the match. #ExtremeRules pic.twitter.com/L3o0nCXFkt

The New Day won after hitting the Midnight Hour on Daniel Bryan. This was the first real result of the night where I was kind of meh. All three teams looked good, but it feels so same same for the New Day to win the titles again against two fairly new teams. Good match though, and this is a really good show so far.

I liked the match, but not as much as I was hoping. It was well-worked, but not as spectacular as you’d expect or want from these two. The finish looked dangerous as Ricochet took a Styles Clash off the middle rope. Lots of interference from the Club to cause Ricochet to lose his title. Another slightly underwhelming AJ Styles big show match to me.

This match didn’t even happen. Owens hit a stunner and it was over.

The match was solid, but the show was long by this point. There was a tremendous spot where Corbin and Evans were on tables outside the ring. Becky did a seated splash onto Evans and Seth hit a sweet frog splash.

The finish of the match was that Corbin gave Becky the End of Days. Seth was so mad that he beat the hell out of Corbin and gave him three curb stomps to win.

Brock Lesnar came down and gave Seth two suplexes. Paul Heyman cashed in the briefcase and the Brock hit the F5 to win the title. Kind of anticlimactic after all that time of teasing it.