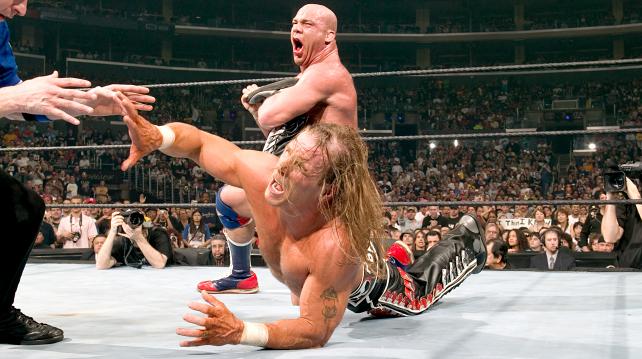 We’re down to the top 10 in our top 35 WrestleMania matches ever list.

This is the highest ranked match of all the ladder matches on this list. There was just something a little more special about this one. Part of that reason is because this match was on the greatest WrestleMania card in history, which was nearing the end of their popularity explosion.

Also, the setting helped. When you saw these guys on top of ladders surrounded by near 70,000 fans watching in anticipation, it just added to the excitement. All three teams were brilliant, and though Edge and Christian won, Jeff and Matt Hardy, and Bubba Ray and Devon were all spectacular in their own right. Tables, ladders, and chairs, oh my! — GG

It’s hard to believe that WrestleMania X-Seven is closing in on its 20th anniversary because my memories of it are so vivid. It doesn’t seem like that much time has passed for the event that many consider to be the greatest major wrestling event of the 2000s to be that old. Being part of the audience and getting to witness so many classic moments live was one of my favorite experiences and there was nothing more important (or epic) than The Rock vs Stone Cold Steve Austin.

I know that because of the WWF’s booking decisions that started at the end of this show puts a damper on it for many fans, but I totally disregard that. This was a dream match, even though we had seen it several times before. This was peak WWF, even though the build to the match was rocky (no pun intended). This was two of the greatest competitors of all-time in any company doing what they did best while still at their best. These two men had the entire Houston crowd in the palm of their hands, myself included. These were two guys who could coast through everything they did and still make millions, but their love for what they do was put on full display as they battered each other around the Astrodome. Was the finish a little funky? That’s pretty much an unanimous yes, yet for a half an hour I was on the edge of my seat along with everyone else in the arena and the millions (and millions) watching at home. If this is what we call the end of the Attitude Era, then it went out on the highest note possible. An amazing match to put an exclamation point on arguably the greatest Wrestlemania in history. — ZackMalibu

In four WrestleManias from 2009-2012, the Undertaker faced Shawn Michaels twice and Triple H twice. All of those matches were highlights from their perspective WrestleManias. His 2012 match at WrestleMania XXVIII pulled out all the tricks in order to create that one last classic match.

If you thought Triple H was obsessed with beating the Undertaker at WrestleMania 27, he’s doubly obsessed here. This match is held inside the Hell In A Cell cage. But that was more spectacle than anything else as the cage didn’t really get utilized. Shawn Michaels was also the referee, helping tell the same story that Triple H was trying to tell. He desperately wanted to beat the Undertaker, but was unable to do. Now, it was possible that his buddy Triple H could beat him and he had to try to balance the angel and devil on his shoulders. Would he call the match straight, or would he try and help Triple H win?

The only thing the match lacked was the one surprise spot like the tombstone spot the year before. But otherwise, it was just as good, or possibly a hair better. Collectively we liked it just a tad more. — GG

It was a dream match in every sense of the word. The first meeting of Shawn Michaels vs Kurt Angle was a bout that could have only taken place on the grandest stage of them all. In my opinion, this was the last classic Kurt Angle match. He’s had some good ones since and even a great one (vs Yugi Nagata in 2008) but this match with HBK may have been his swan-song as far as matches of this caliber.

Both wrestlers performed to the peak of their powers, wowing the crowd from bell to bell. The match culminated with some of the most dramatic near falls in Mania history and some absorbing submission teases. The spot where Shawn, with his tank past empty, mustered up one last super kick was incredible. It wasn’t enough though, as the ankle lock got synched back in and in a rarity, the babyface Shawn tapped clean. — @Alan4L 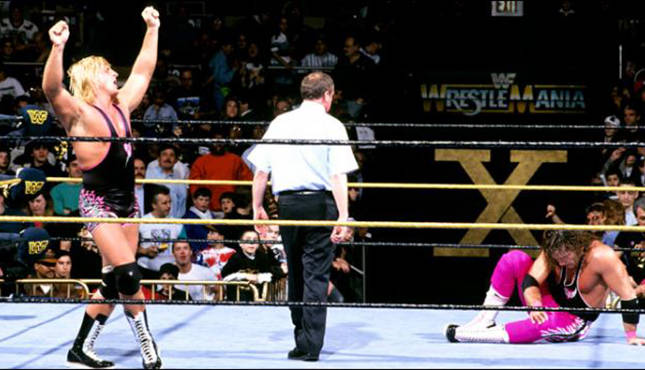 WWE (then WWF) couldn’t have wished for a better match to kick off the 10th WrestleMania. The Hart brothers delivered an absolute technical masterpiece. It featured tremendous back and forth action. There were some really great displays of counter wrestling throughout this match. I thought the victory roll reversal made for the perfect finish.

The benefits of this match were two-fold. Firstly, Owen got a big win over a main event level guy. It established him as a star and set up a rematch for down the line. And secondly, it meant that the crowd was going to be particularly hot for Bret vs Yokozuna in the main event. The story of Bret losing in the opener only to come back later and win the title played out perfectly. It was what made that show special. — @DuanDub

Bret Hart vs Owen Hart may not even have been the best match on that particular PPV (I think it was) but it was my personal favourite and is right up there as one of my favourite matches of all-time. Put aside the fact that it was a great “wrestling” match that holds up 25 years later; it was a phenomenal story. It was a match where the result MATTERED and that is extremely rare in modern wrestling. I had always been a fan of the Harts, and especially Owen. Leading up to the match, I was only hoping that Owen would put up a good fight and go toe-to-toe with his more accomplished brother, hopefully elevating his stock in the process. Never in a million years did I think he’d win. And even if he did, it would have to be through some form of chicanery. But nope. He out-wrestled him and beat him clean in the middle of the ring, setting up a very successful run in challenging for the title, which Bret would win later in the show. It “made” Owen for the rest of his too short career. In a way, it was similar to the way Bret was elevated by beating Ric Flair a few years earlier. I recently rewatched this classic and enjoyed it every bit as much today as I did then. — @PaulAceFontaine