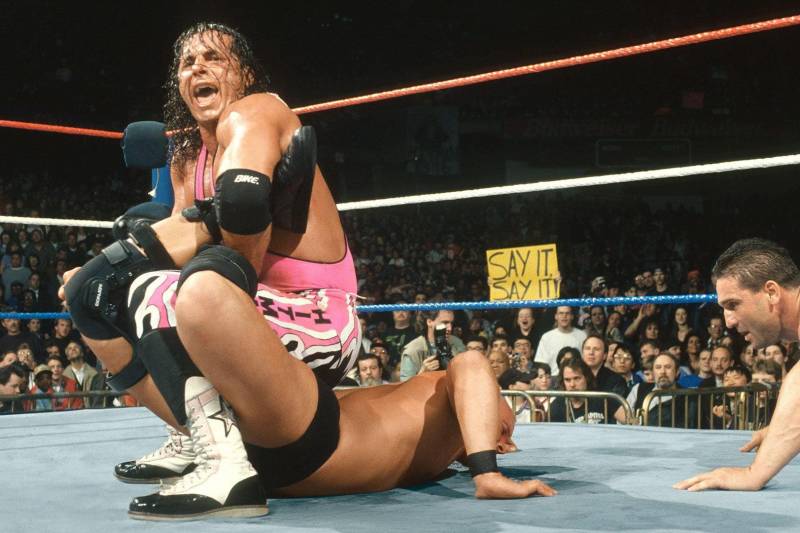 Finally. We’re at the top 5 in our top 35 WrestleMania matches ever list!

To this day, HBK against Undertaker in Houston is the greatest WrestleMania match I have ever seen live. The match was such a masterpiece. My most vivid memory is the crowd moving like an ocean caught up in a storm. Pat Patterson stood and watched the match mere feet away from my seat. No one else seemed to notice the maestro himself beaming with pride — but I remember his smile that night could have stretched across the whole state of Texas. — LariatRope

What tremendous in-ring storytelling this was. It was the streak vs the career. If we pretend his match in Saudi Arabia was just a bad dream and never happened, I saw his last match ever live with over 65,000 people in the building. There was a point in the match that nearly took my breath away and I’m not the type of wrestling fan who usually gets sucked in that badly, but it happened.

Late in the match, when we had all figured that Michaels was going to lose, the Undertaker sort of looked at Michaels in awe at the amount of punishment that he was able to take and for a split second, gave him some sympathy. But Michaels slapped Taker as if to say, “Don’t you dare feel sorry for me,” and Taker ended the match with the jumping version of the tombstone. It was very surreal. — GG

Wrestling, just like any form of pop culture, contains events that might seem amazing in the moment, but don’t stand the test of time. I can’t tell you how many times I’ve heard or read people speak of how they remember being so into the insanity of ECW and can’t bear to watch it now. Or how those late 90’s WCW shows sucked us all in, but are awful in retrospect. Opinions change, fads fade away, but through it all there is one thing that remains a constant among wrestling matches.

“Macho Man” Randy Savage vs. Ricky “The Dragon” Steamboat from WrestleMania III is one of the greatest matches of all-time not just in regards to WrestleMania, but in wrestling history.

It’s a match that has stood the test of time. When you ask longtime wrestling fans what their favorite WrestleMania match is, 9/10 of them would probably say this match. It’s become the standard answer to that question. It’s a measuring stick that other athletes in the industry strive to make their matches as good as. Despite a flood of changes in the industry and the evolution of wrestling through the years, it has consistently remained on everyone’s mind when conversations about great matches take place. Savage and Steamboat played their roles to perfection in an epic battle of good vs evil that holds up to the hype 30+ years later.

Now, am I saying all of this just because it’s my personal favorite WrestleMania match of all time? Yes and no. I was a mere child when WrestleMania III aired and even then I was more awestruck by this bout than Hogan vs Andre. It’s the match that cemented Steamboat (and to a lesser extent Savage) as one of my all-time favorites. I’ve seen it time and time again — on VHS, DVD, and on the WWE Network, and every single time I’m still engrossed in it. At this point I probably have the spots memorized just as good as Savage and Steamboat did.

It was a match that deserves the reputation that it gained. Hogan vs. Andre was all about the atmosphere, and even though that match is historic on many levels, this one was the show stealer. This is the blueprint of how a hero can overcome adversity and best the heel that got one over on him. This type of storytelling is what’s missing from modern wrestling. This is the Godfather of professional wrestling matches, and just as that film is important for every cinephile to watch at least once, this is the match that every true wrestling fan should see. @ZackMalibu

This match may now be overlooked because of how hard it is to watch a Chris Benoit match these days. At the time, it was the perfect match with the perfect ending.

I remember screaming at Triple H, pleading with him to tap so that Chris Benoit could finally win the strap. And when he did, I think I gained more respect for Triple H than I’d ever had. To me, at that point in wrestling, Benoit was everything that was right, and Triple H wasn’t. I’d be a fool for thinking that afterward, but not at that moment.

And who can forget the final scene in the middle of the ring with Chris Benoit’s family and one of his best friends in Eddie Guerrero standing next to him, congratulating him on winning something he’d earned because of hard work. — GG

I thought that this match had a great chance to be our choice for number one, or tied for number one, but any of the top five matches could’ve won in my book. I think the reason that this match won is because not only did Austin and Hart work so well together, but it also signified one of the greatest double turns in the history of wrestling.

The best part of the match is actually the end. Bret Hart had Austin in the sharpshooter while Austin was bleeding profusely. Austin never tapped, but he passed out, and it kicked off a relationship with the fans that Austin would use to become one of the biggest stars of all-time.

Bret was magnificent in putting this submission match together, but the fans were behind Stone Cold after it was done. Vince McMahon built the current publicly traded company on the back (and sadly, the neck) of Stone Cold. But some of that is due in part to the perfect match Austin had with Bret Hart. — GG