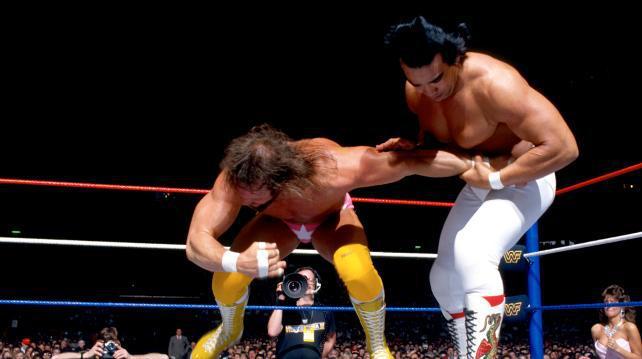 Randy Savage facing Ricky Steamboat at WrestleMania III remains my favorite WrestleMania match of all time. It’s like The Godfather of ‘Mania matches. It holds up after multiple viewings, features two stars in their prime on their best day. I know the match by heart at this point, but could rewatch it any day and still be just as into it as I was when I was a kid.

If we ever did a WrestleMania MVP poll, Randy Savage would be an easy pick. Macho Man gave us the greatest match of Ultimate Warrior’s career (and to his credit, this was not a case of the Warrior being dragged through something kicking and screaming), an epic with Ricky Steamboat, the ultimate ending to the Mega Powers explosion, and a classic with Ric Flair just a few years before they would move their war to WCW and reignite the house show business. I also think his Falls Count anywhere match with Crush at WrestleMania X is somewhat overlooked, because while it’s not on par with the aforementioned classics, it is quite entertaining and arguably the best match of Crush’s career.

I’ve never been a Hulkamaniac, even as a kid, but I’ll give credit where credit is due. For a man who was pitted against an awful lot of slugs during his heyday, he had his working boots on when it came to the match with The Ultimate Warrior at WrestleMania VI. The only match that overshadows their epic collision would be the retirement match that Macho Man had with Warrior one year later, because I felt that it was a better match thanks to the storyline and the drama involved. Hogan versus Warrior was a dream match in an era where dream matches were in wrestling magazines rather than in the ring, and with both being babyfaces, the curiosity of seeing it led to the appeal as well as people’s fond memories of it. Hogan had better matches (and he certainly had worse), but the stars aligned for WrestleMania VI.

Looking back on the Iron Man match between Bret Hart and Shawn Michaels, a match that I loved during my teen years, I don’t think it holds up as well today. It’s not a bad match, but upon rewatching it feels more boring than I remember it. I remember thinking it was a modern classic back in ’96, but now I think it’s an above average affair between two workers who would have better days on future ‘Mania cards.

If Steamboat vs. Savage is The Godfather of WrestleMania matches, then Bret Hart vs. Steve Austin is Goodfellas. It’s a perfect match with amazing performances by all involved. The intensity, the storytelling, and the effort here is nothing short of admirable. Bret Hart managed to turn himself heel, turn Austin babyface, and get Ken Shamrock over as a badass, all in one fell swoop. The image of a bloody Austin trapped in the sharpshooter is iconic now, and while everyone credits Vince McMahon being the perfect foil to make Austin into a megastar, Bret deserves just as much credit, because to me, this is the match that put Austin over the top and put him in the upper echelon of the WWF/WWE where he would remain.

WrestleMania XIV was the first one I attended live, and it was like being there for all the events I had watched during my youth. The celebrity appearances, random undercard matches, and raucous crowd made me feel like I was at one of the original ‘Manias. Looking back on it, while it might not be considered a blow away event, it had something for everyone (battle royal, mixed tag, a hardcore dumpster match) and I feel like that level of variety is lacking from some of the modern ‘Manias.

I was there live for X-Seven, and to this day I’ve never been with a crowd as hot as this one was. Austin vs. Rock felt epic every step of the way. The event as a whole never dragged (though I wasn’t as into Undertaker vs. Triple H as a lot of people were). Even though the finish was right out of the Vince Russo swerve playbook, it didn’t take away from the fact that I just saw two of my favorites at their peak have one of the best matches in WWF history.

I know Shawn Michaels earned the rep as being Mr. WrestleMania, but for as amazing as The Undertaker matches were, there were others that I felt were rather average. I mentioned my feelings on the Iron Man match earlier, as I don’t think it’s deserving of such high praise in retrospect. Then you have his match with Vince McMahon which was just your usual plunder stunt show. Even Flair’s retirement match is one that I felt was sadly average given what both were capable of previously, and the shoddy way of handling Flair’s farewell story didn’t help. Was it emotional? Absolutely. You also couldn’t have picked a better opponent, but I feel that they could have, and maybe should have, had a better match. 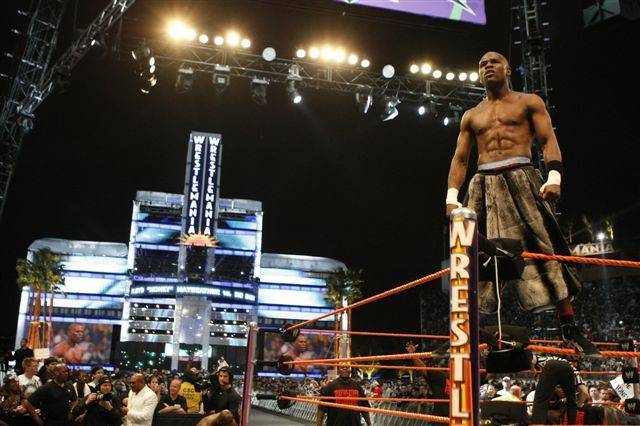 I think that Floyd Mayweather’s WrestleMania appearance was the best use of a celebrity aside from Tyson’s role at XIV. I also have to give credit to the typically stubborn WWE brass for running with Floyd as a heel when it was obvious that he wasn’t a babyface to the crowd. The structure and booking of Floyd vs. Big Show was really well done. Mayweather had a lot more on his plate than sticking around the wrestling industry, but it would have been cool to see him return to troll a popular face (John Cena, Shawn Michaels) for another big event appearance. Kudos also to Big Show for not being afraid to sell and put Floyd over. I’m sure that the original idea for this match, Rey Mysterio and Mayweather vs. Big Show and Shane McMahon (or even previously with Rey and Oscar De La Hoya vs. Mayweather and Shane McMahon), would have had Shane getting knocked out for the pin, but everyone involved definitely made lemonade here.

There were a few matches that I remember loving at the time that aren’t as exciting in retrospect. Matches like Edge vs. Chris Jericho, CM Punk vs. Chris Jericho, and Undertaker vs. Triple H from 27 just no longer feel like the classics they came off as at the time. Edge vs. Jericho is what I’d consider the worst offender here, as I don’t think their story picked up much steam, and to me it came off like a very good RAW main event as opposed to being a WrestleMania title match.

Having been in the crowd the past four years, I can attest to the fact that the long shows are affecting the crowd. I think out of the past four years Orlando has been the best for atmosphere, and New Orleans might be the worst. I know we tend to complain about booking or the effort put into things by certain stars, but I do think a tired crowd and the ensuing lack of reaction has hurt how these matches come across when watching them on television.

Brace for IMPACT: Josh Alexander contract status in question, may miss No Surrender

Guide To The 2022 Royal Rumble