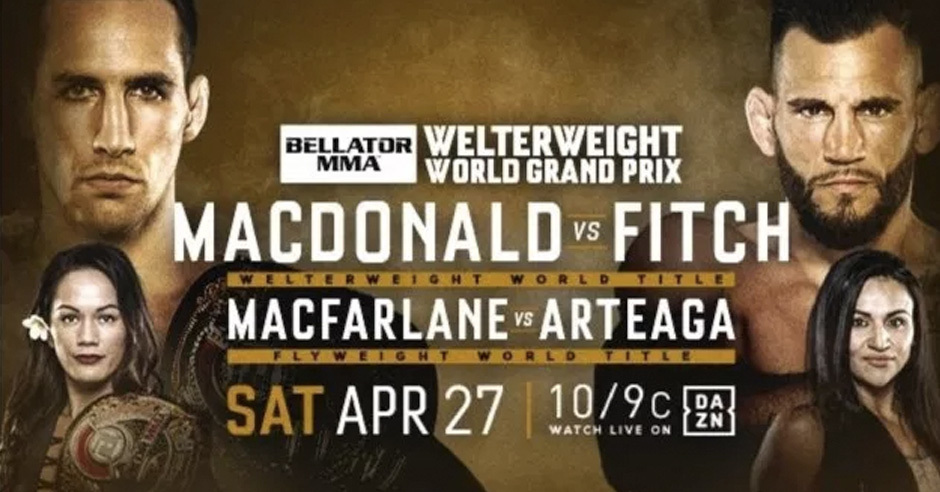 Check out our Bellator 220 live coverage.

If you missed the show I did with Dave Meltzer about WWE financials, which included interviews with Ilima-Lei Macfarlane and Jon Fitch, you can check it out on the Wrestling Observer. It’s a free show for everyone to check out.

We’ll be back with live coverage of the main show, which starts at 7PM Pacific time.

Here’s our view for the evening. 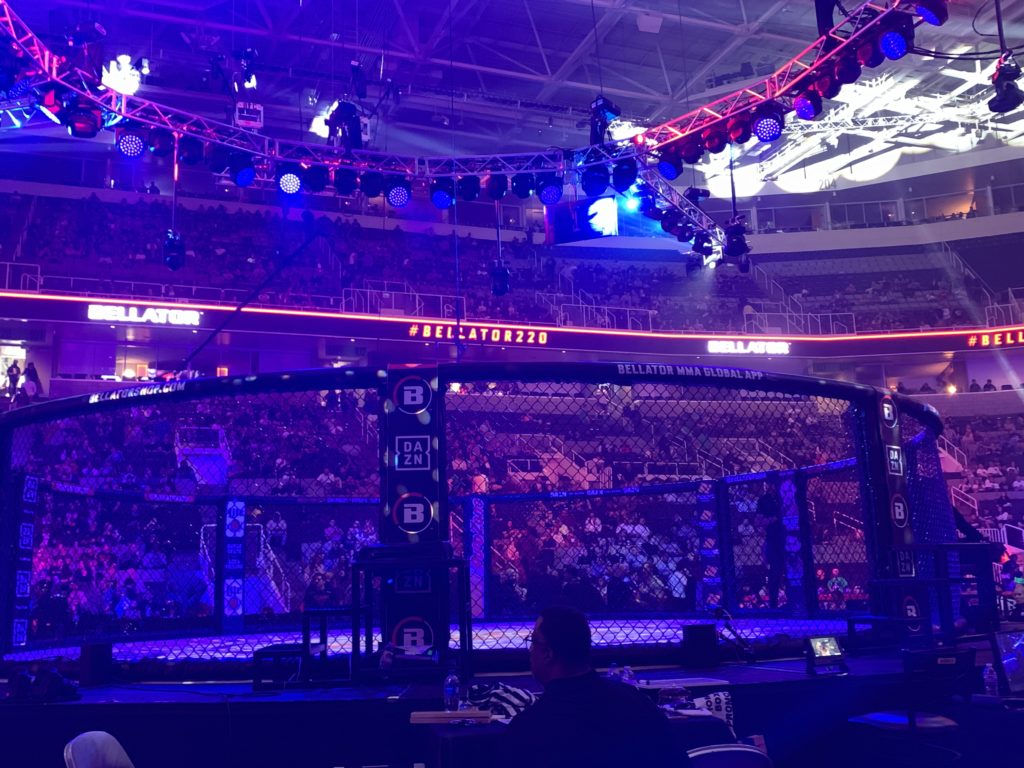 Great boxing battle early on. Bolanos went for a spinning back fist and was hit with a left hook right as he went into his spin. Stolen went for a takedown that was stuffed. Bolanos shot in went for under hooks, but Stolen suplexed him over. They both connected; Bolanos with a right hand and Stolen with a right elbow. And then they both went for left hooks. Bolanos’ landed heavier but he was also rocked. Stolen went down and he was finished on the ground. Great one-round fight.

Winner: Gaston Bolanos by way of 1st round TKO

FULL FIRST ROUND – Nathan Stolen vs. Gaston Bolanos – This first round was ?!

The #Bellator220 Main Card is live now on ? @DAZN_USA!
Tune in with @SkySports in the ??. pic.twitter.com/SjFi1unpUK

First real shot that lands comes about a minute and a half in as Davis lands a nice right hand. McGeary came back with a punch of his own. Both guys have landed leg kicks. Davis landed one over the left ear. Lots of missing late in the round. McGeary’s reach is to his advantage, but Davis is very game on the feet.

McGeary closed the distance and Davis landed a nice right hand. Davis dropped like he was going to shoot and McGeary was ready, and then Davis threw a knee from the clinch and was out of there before McGeary was ready to strike back. Davis is fighting a tremendous defensive fight. He’s perfectly out of range from McGeary’s strikes and has blocked all of his head kick attempts. He’s even caught some of his punches. He sees what’s coming before McGeary throws it. I have Davis up 2-0, but both rounds were close.

Davis got a takedown early in the fourth. He’s behind McGeary and landing shots while McGeary is on all fours. McGeary was trying to set up a submission. McGeary was getting up and was on his knees and Davis front kicked him in the face. Davis is looking tired. McGeary is closing the distance better. They trade knees from the clinch. Davis got another takedown with about a minute to go. He’s pounding on McGeary who is giving up his back. Before Davis even sunk in the rear naked, the fight was stopped. McGeary may have been out from the punches.

McGeary looked to have tapped to strikes.

Henderson is in trouble. Piccolotti got his back and went for a choke. Henderson stayed calm and fought it. They were back on their feet and Piccolotti put on the choke again and pulled Henderson backward and back to the mat. Henderson is doing a good job fighting the choke. Piccolotti has his legs figured foured around Henderson. He sunk in a head and arm choke and it looked like curtains for Henderson, but he got out of it. The crowd is going crazy. Henderson back on his feet knows that he has to keep it there. He started to throw kicks and landed one to the head. Great comeback round.

Lots of great grappling in the round. Tons of reversals. Henderson had a front face lock on him while kneeing him in the face. Henderson got a takedown. Piccolotti grabbed an ankle lock. Henderson was inspired this round. Fight is even.

Piccolotti got a takedown. Henderson went for the guillotine again. Piccolotti went for a kimura and got high on Henderson’s back and he turned him over like a snap mare. Piccolotti was holding Henderson down and with just over a minute left, Henderson tried to get up. Piccolotti jumped on his back and put him in another rear naked choke. Henderson fell back on it. He got out of it and ended up in top position. The third round will be hard to score.

Ilima-Lei shot out like a canon for the takedown. She pushed her back against the cage. Arteaga is fighting it and staying on her feet. She finally got it and Arteaga tried to get to her feet by giving up her back. She ended up on top while Ilima-Lei grabbed her heel. Arteaga looked to her corner to fight what looks like a knee bar attempt. Arteaga finally got her foot out and they’re back on their feet. Arteaga landed a shot to her face to end the round.

Arteaga definitely is more comfortable on the feet. Ilima-Lei wants to take it back to the ground. She fought hard for a takedown and got it. But that game also tired her in the first round. Ilima-Lei is bleeding from the nose. So is Arteaga. Ilima-Lei threw a low kick and then fired with a right hand which is her best combination so far. Arteaga looks more comfortable. Ilima-Lei looks like she knows she’s going to have to dig deep here.

Ilima went for the takedown again and it took her moving mountains to get it. She landed an elbow to Arteaga’s head, splitting her open. It was a nasty elbow and a nasty cut. The referee stepped in to check the cut and they had to stop the fight.

Ilima-Lei Macfarlane opens up an enormous cut on Veta Arteaga’s forehead and referee Jason Herzog waves the fight off upon the doctor’s advice. Macfarlane retains the title via TKO. #Bellator220 pic.twitter.com/EheJtWzsfI

She said that she was going to fight Arteaga again.

A brutal elbow from @ilimanator gets her the victory via TKO! ??

MacDonald rushed in immediately and landed a big right hand out of the gate that staggered Fitch back. Instinctively, he went for the takedown and to probably gather himself a bit. MacDonald grabbed a double wrist lock and Fitch backed away so now we’re back at the start. MacDonald looks very fluid on his feet and Fitch looks whatever the opposite of fluid is. Fitch went for a takedown and MacDonald tried to grab his neck, but Fitch ended up on top inside of his guard. Easy round for Rory.

Fitch went for a takedown, got it for a second, but as Rory was trying to get back up, Fitch landed his best punch so far. MacDonald landed a head kick that Fitch hung onto. He was trying to use it to finish a takedown, but Rory punched him in the face while hopping on one foot. Fitch looks like a heavy bag when it comes to his movement knowing that Rory is coming with something. Fitch started to vary his striking, which also meant eating a punch to land one. He’s still coming for the takedowns. Rory reversed him and got one and landed an elbow to the head to end the round.

Fitch is dominating this round with his wrestling. He got a takedown and is keeping MacDonald against the cage. MacDonald may just be taking this round off. He’s not really doing anything. They both look exhausted.

Fitch won another round using wrestling. He also withstood another situation where he was in trouble. MacDonald doesn’t look his best here and Fitch could steal this one. The reality of this fight is that MacDonald should’ve already finished the fight, but Fitch’s toughness and whatever wall MacDonald has hit means I have a scorecard tied at two rounds apiece.

I’m not entirely sure what MacDonald was doing in this round. He must’ve been super tired, or feeling beaten, because he had zero energy and no urgency to do anything to win that round. He let Fitch lay on top of him for just about the entire round. I have Fitch winning this fight 3-2.